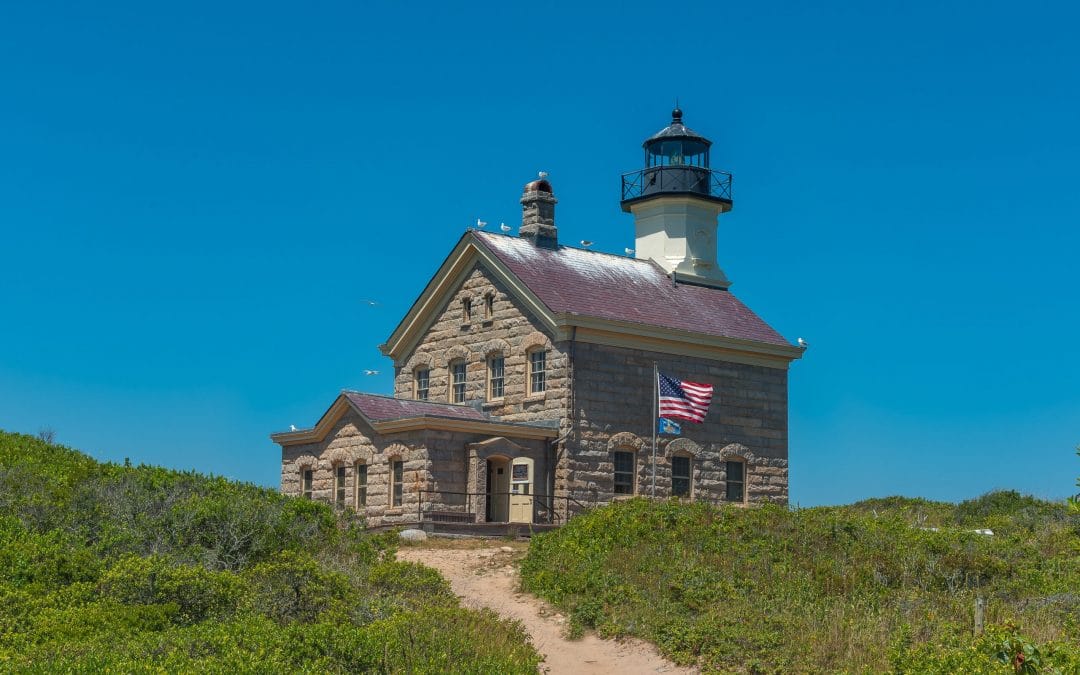 For many years, pilot friends have urged me to visit Block Island, a popular vacation spot just under 10 miles off the coast of Rhode Island and about 14 miles east of Montauk Point on New York’s Long Island. Each gave pretty much the same recommendation: This beautiful, fun, and relaxing place is remarkably easy to reach with a small airplane.

I cannot reasonably explain why it took me so long to act on their good advice, but I recently flew there in the Cessna 172P. The trip took about 90 minutes from my home airport in Sussex, New Jersey (KFWN). Instead of flying a straight line, which would have taken me to the edge of New York’s Class B airspace, I bent the course slightly toward Bridgeport, Connecticut, before turning to cross Long Island Sound on a direct course to Block Island.

The Cessna 172P the author used to make the journey. [Photo: Jonathan Welsh]

This is a case in which flying is by far the best way to reach your destination because the common combination of driving and taking a ferry, either from Rhode Island or New York, easily consumes more than four hours and places you at the mercy of the ferry schedule and the whims of interstate traffic.

Block Island’s distance from the mainland gives it a “real island” feel, yet it is close enough that people who might be anxious about flying over water will have the comfort of being within a few miles of land. Once on the ground, you may feel like you are half a world from home because there are so many picturesque, quiet places to explore. More than a third of the island is made up of nature preserves, so the overall landscape seems remarkably natural and undisturbed.

While the island is a great place to do nothing but relax, there are also many things to do and see. Below are several places you should not miss.

Often among the first things pilots notice on approach to Block Island is this complex of five turbine towers that rises 600 feet over the ocean just 3.8 miles offshore. The turbines, which began operating in 2016, are well-marked on the sectional chart but seeing them from the left downwind leg of the traffic pattern for Runway 28 truly does them justice. If the winds favor Runway 10, you should fly over the south side of the island for a closer look at the wind farm before descending to pattern altitude.

Getting back to that left downwind, if you are too distracted by the wind farm on your right, you might miss these dramatic cliffs to the left. They rise about 200 feet and often are outlined by the white churning froth of waves breaking at their bases. Approaching the island this way can remind pilots of why they learned to fly. From the ground, you can enjoy sweeping views from the bluffs and walk down more than 100 steps to the beach below.

The $100 hamburger awaits, as do crab cake sandwiches, tuna steak melts, and shrimp po’ boys. The breakfast menu is available all day, from 7 a.m. to 2:30 p.m. The restaurant is a good place to settle in and get your bearings over breakfast or lunch. The diner occupies the same building as the FBO, which can help with ground transport. There’s no Uber but plenty of taxis, and since the island covers less than 10 square miles, biking and hiking are good options.

This is the main drag where you will find shops, galleries, restaurants, the visitor center and views of Old Harbor. It is also a starting point for self-guided bicycle and walking tours. Bike and scooter rentals are available. There is a farmers’ market on Wednesday mornings at the nearby intersection of Spring and High streets.

You can spot the Southeast Light, one of two lighthouses on the island, on the way to Runway 28. It was built in 1873, and its light was initially fueled by whale oil. In 1993 it was moved 300 feet inland from its former location on Mohegan Bluffs because of encroaching erosion. In the case of the North Light, at the northernmost point on the island, the fourth time was the charm. Islanders built the first lighthouse there in 1829, but it was swept out to sea a few years later. Storms similarly destroyed two subsequent lighthouses. This fourth one, built in 1867 of granite and iron, has stood the test of time.

Not far north of Water Street is the beginning of Crescent Beach, a 4-mile stretch that includes the Fred Benson Town Beach and Mansion Beach, the latter named for a large, elegant home that once stood there. Crescent is especially easy to reach because of its proximity to the main commercial district, but there are about 17 miles of beaches wrapping around the island that are worth exploring, and all are open to the public.

The post Flying To Block Island and Six Things You Have To See After You Land appeared first on FLYING Magazine.