GA Airport Turned Into Emergency Base In Storm-Ravaged California 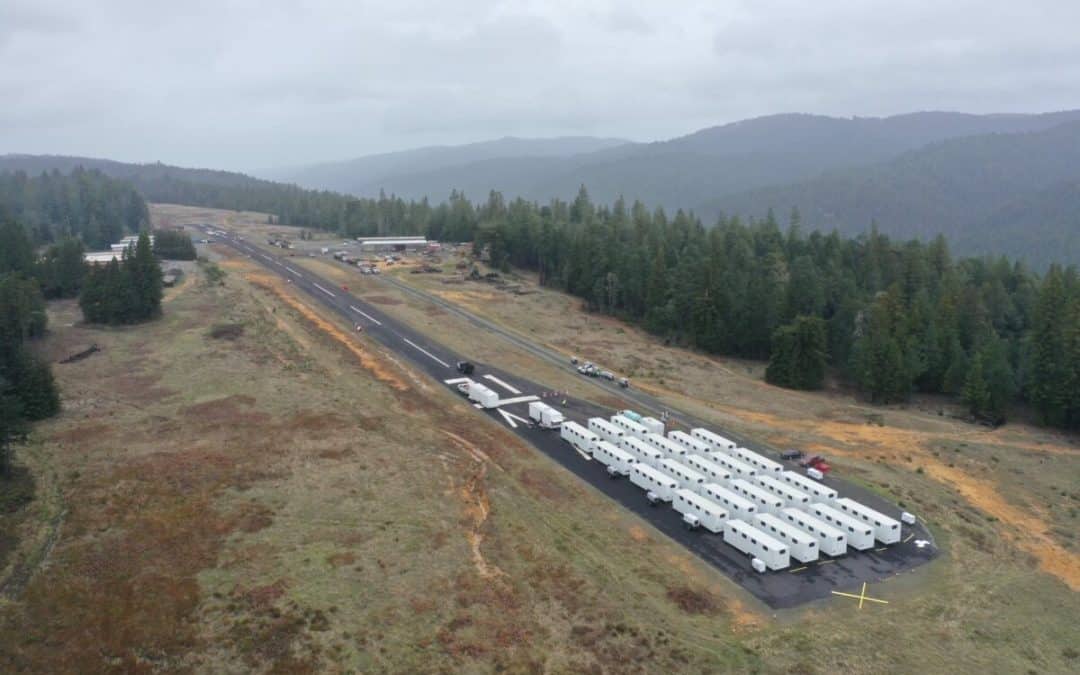 One of the arguments used to protect airports from closure and redevelopment is that they are public resources, especially in times of emergency. That’s exactly what is happening at Ocean Ridge Airport (E55) on the coast of California.

Pacific Gas and Electric Company (PG&E)—the company that provides the bulk of California’s power—is using the airport as an emergency staging area as wave after wave of atmospheric rivers come in from the Pacific knocking out power. As of Monday afternoon, at least 12 deaths had been attributed to the storm, some by flood waters or by falling trees that were knocked down by the combination of saturated soil and strong winds.

Where Is Ocean Ridge?

The airport is located in the southern tip of Mendocino County approximately 105 nautical miles north of San Francisco and approximately 142 miles from Sacramento. The area is rural—it sits close to the seaside community of Gualala, population 2,000. The area is popular with artists and tourists.

The airport was built in the 1960s as part of a fly-in golf resort some 1,000 feet above the ocean. The motto of the airport is “Above the fog, beyond the smog” alluding to the fact the airport is often above the fog that can hug the coast and is well away from the pollution often encountered in cities. The golf course failed, the airport prevailed and in 1970 was purchased by John Bower. He still lives in the caretaker’s house on the 300-acre facility.

The airport is managed by Julie Bower, John’s daughter-in-law. She says almost overnight the airport, which has 25 hangars and 11 based aircraft, turned into a small city with some 300 residents—all working for PG&E. These teams are scrambling to restore power to thousands of people left in the cold and dark by the storms that are battering the Golden State with heavy rain and high winds resulting in flooding, downed trees and powerlines, landslides, and massive blackouts.

According to Bower, the people of Gualala are prepared for loss of power during winter storms, saying this is partially because of the remoteness of the area. There is a road in from the north and one from the south, and these roads are sometimes blocked by downed trees which also take out the electric transmission lines.

“People here have generators and chainsaws and we’re used to being on our own,” she said of Gualala. It’s a different story for the larger communities, which is why PG&E has set up camp at the airport.

According to Bower, on Saturday, January 7, she received a call from PG&E asking if they could use the privately owned airport property as a staging area for the emergency crews.

“I said ‘of course,’” Bower said. “The airport is a resource in our community. I met with an official from PG&E and we drove around the site in the pouring rain to see if it would meet their needs.”

Bower notified the tenants of the situation and issued a notice to air missions (NOTAM) advising the aviation community that the airport was going to be closed for the duration of the emergency.

Soon the trucks and flatbed trailers carrying huge spools of wire and cable and utility poles started rolling in. Then came the infrastructure for the pop-up city, which included bunker-style housing, potable water tanks, tanks for gray water, showers, latrines, and caterers to feed the 300 or so souls who are there.

The housing was placed on the approach end of Runway 31, effectively closing the airport to airplane traffic, although there is still designated space for helicopters should a medical emergency arise or supplies need to be airlifted in or out. Some of the airport buildings have also been pressed into use, she noted.

“For example they needed a food tent that won’t blow away because there is still quite a bit of wind, so they ended up taking the pilot’s lounge for the caterers.”

The airport is being supported by generator power. The rest of the homes and businesses have sporadic power, said Bower, as the lines are blown down, taken down by trees or turned off so that the utility company can make repairs.

“We are having trees coming down left and right due to the wind,” she explained. “I looked at the local weather report and it showed the winds on Wednesday were about 20 mph, but they are always higher here at the airport because of the micro climate. There were a few gusts at Stewarts Point just south of us that clocked in at 66 mph.”

Flooding is not an issue at the airport, she said, because sits at approximately 900 feet above sea level and the runway itself has a rise in the middle of it, so much so that there is a warning in the notes on Airnav.com that the slope is great enough to block your view of the opposite end of the runway. The airport markings are non-standard as well.

Getting Closer to the Need

“For large scale emergencies, PG&E sometimes decides to use basecamps to consolidate personnel, supplies and equipment as close to the damaged areas as possible,” said Megan McFarland, spokesperson for PG&E.

“These base camps can range in size from a few dozen crew members to hundreds or thousands. They can include tents or trailers for leadership and support staff, food, emergency supplies, showers, field laundry and laydown yards for materials needed for electric and gas restoration efforts.”

According to McFarland, when the decision is made to set up a base camp, PG&E’s logistics specialists and Corporate Real Estate team begin looking for suitable locations, taking guidance from incident commanders and operational leaders.

“We look for land that meets our current needs and is accessible for large truck traffic. We use traffic control to ensure the safety of area residents as we conduct our work. We also work with local leaders to ensure that the locations can be safely accessed without interfering with the work of first responders such as fire or law enforcement. We provide support as needed to those first responders at our base camps as well if they have food, temporary lodging, or other needs.”

As far as how long the camp will be in place, that depends on the weather and the damage done. Bower told FLYING the utility company told her the airport will remain closed until the end of February, but that it was  a ‘soft date’.

Ocean Ridge Airport’s runway measures 2,504  feet by 50 feet, and is aligned 13/31. On the Airnav.com page for the airport there are caveats for operations there, including a warning that both approaches are done over tall trees and when there is wind there will be a fair amount of turbulence on approach. In addition, there is a warning about deer at the airport. The airport also has a 100-foot drop off on the southend, and touch and goes are not permitted either are operations by jets or ultralights.

In 2014, the airport runway was in such poor condition the California Department of Transportation threatened to pull the airport’s public-use permit unless repairs were made. If that happens to an airport, it becomes a Special Use Airport. This requires pilots to telephone in advance to get permission from the owner to land there. Julie Bower noted that would have been problematic and her father-in-law, the airport owner, had a business downtown away from the airport.

Because the airport is privately owned, it is not eligible for FAA or state grants that are often used by publicly owned airports to pay for runway repairs. Instead, a fundraiser was held to raise money to pay for repairs.

“The only income my father-in-law gets from the airport comes from the hangar rental and tie down fees,” Bower told FLYING.

The Bower family, with the help of the generous community and an online funding campaign was able to raise the $60,000 to put a slurry coat on the runway.

The post GA Airport Turned Into Emergency Base In Storm-Ravaged California appeared first on FLYING Magazine.