GAO to FAA: Do More To Fight Aircraft Laser Strikes 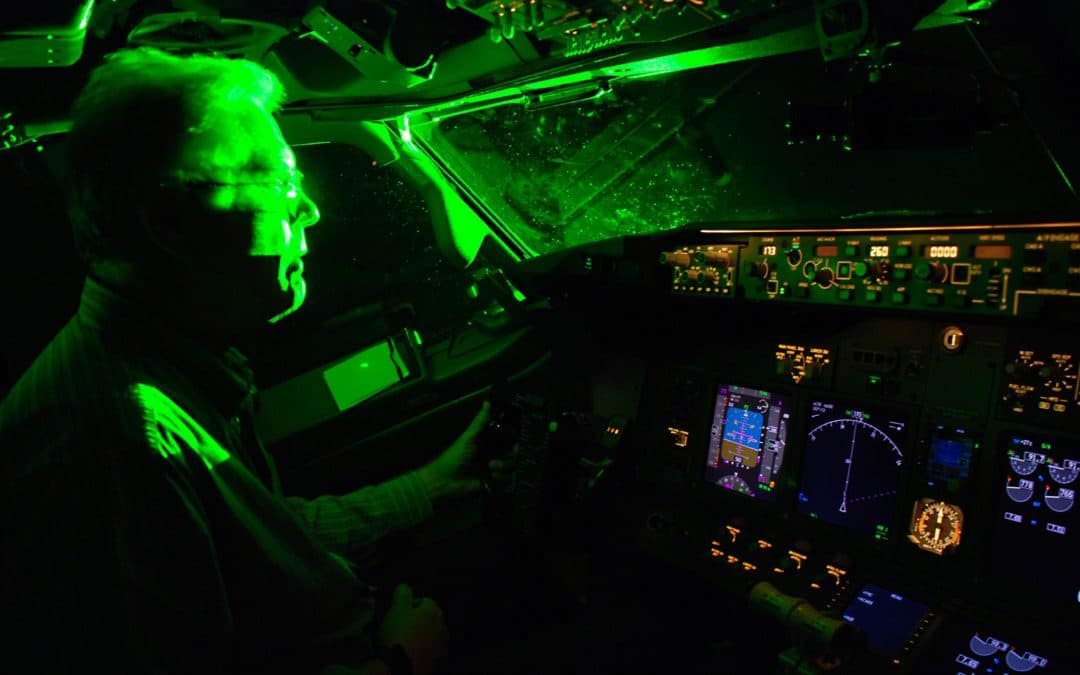 After pilots and air traffic controllers reported a record high of 9,723 laser incidents against aircraft in 2021, the Government Accountability Office (GAO) is calling on the FAA to do more to curb this dangerous trend.

In an August 18th report to Congress, the nonpartisan congressional watchdog group, essentially told the FAA enough is enough.

To produce its report, the GAO examined data from the FAA and the Department of Justice from July 2016 to September 2020. It examined enforcement actions and interviewed 15 aviation and local law enforcement entities to get a wide-ranging perspective. It also reviewed the FAA’s public outreach program, which educates the public about the hazards of laser incidents.

The Problem Is Getting Worse

The FAA has tried to deter people from pointing bright lights at airplanes through media campaigns and by imposing fines on those it apprehends. In fact, in 2021, the FAA issued $120,000 in fines for laser strikes. Those who shine a laser at, or near, an operating aircraft are subject to criminal penalties from federal, state, and local law enforcement agencies. Although no aircraft accidents have been blamed on laser strikes so far, the increasing frequency puts both pilots and the public at greater risk.

Pilots Are Increasingly at Risk

As the report points out, aiming a laser at an aircraft can distract or disorient pilots and is a federal crime. The report claims, “When aimed at an aircraft, the light beam can travel more than a mile to illuminate a cockpit. Some high-powered lasers can incapacitate pilots flying aircraft that may be carrying hundreds of passengers.”  The FAA considers each laser strike an in-flight emergency. Moreover, laser beams have been shown to have a lasting impact on pilots’ vision and threaten their long-term livelihood. The report states that “lasers can harm a pilot’s vision, and laser incidents are potentially dangerous.” The majority of laser incidents occur as airplanes approach an airport at night and at a low altitude, the report states. The GAO also found that helicopter pilots operating at low altitudes are equally vulnerable, especially law enforcement, air ambulance, and TV news choppers.

The GAO said in its investigation that it was tasked with examining the extent to which the FAA and other agencies took action against offenders and the challenges of doing that properly. The FAA, the Department of Justice (DOJ), and states can take action depending on the circumstances, their authorities, and the available evidence in a laser incident. The GAO, in its report, said that the FAA has the authority to take action if an individual carelessly, recklessly, or intentionally violates its regulation. The FAA has the power to bring civil legal enforcement actions (e.g., ordering civil penalties), administrative actions (e.g., issuing warning notices to subjects), and compliance actions (e.g., ordering counseling) against offenders. Moreover, it can assist federal, state, and local law enforcement agencies in pursuing criminal penalties under their authorities against those individuals who aim a laser at an aircraft. However, only the DOJ and states can pursue criminal charges against offenders.

Typically, when an incident is reported, the FAA depends on local law enforcement closest to the event to respond. If the perpetrator is identified, the FAA is responsible for conducting an investigation that attempts to corroborate all of the evidence pertaining to the incident. The GAO said the FAA would be able to do this based on interviews with law enforcement, police records, navigational data from air traffic control, and pilot reports.

However, the GAO pointed out in its report that from July 2016 through September 2020, the FAA only took action against 99 of 232 offenders.

Moreover, it proposed but failed to assess civil penalties against 17 of the 99 offenders. Ultimately, the GAO found that the FAA had not taken action against 133 of 232 laser offenders.

Are Pilots Doing Their Part?

Despite the FAA’s attempt to collect information, the audit found that pilots who were asked to complete a voluntary incident questionnaire provided incomplete data. The GAO said in its report that “According to FAA officials, they rarely receive completed questionnaires.” Of 8,221 laser strikes tracked between June 2020 and May 2021, only 12 percent of pilots completed reports.

One reason for the low completion rate is the voluntary nature of the report, the GAO report points out. Another reason? Pilots said the questionnaire was too long. Indeed, it is five pages, which–as a representative from the pilot group noted in the report–wasn’t realistic for pilots, who may have been between flights, to complete. The GAO also found that the FAA didn’t consistently share information it collected with law enforcement.

The GAO wants the FAA to focus on improving the pilot response rate to the questionnaire after they report laser incidents. To do that, it suggests optimizing the questionnaires to collect the most helpful information for investigating laser incidents so that law enforcement on the ground can do its part. However, while GAO can conduct audits and investigations, it doesn’t have enforcement power. Once it completes its legal determinations, it no longer has regulatory authority.

The GAO also wants the FAA to follow through on the requirements of the FAA Extension, Safety, and Security Act of 2016, which mandates the agency provide Congress with quarterly reports.

Lastly, the report recommends the FAA work more closely with the FBI and the Food and Drug Administration to explore setting up an interagency working group that would allow them to continue public outreach. The FDA has a role in ensuring the safety of lasers because of the Federal Food, Drug, and Cosmetic Act. As the report says, that act grants the FDA “authority to regulate both medical and nonmedical lasers. Such lasers include laser pointers, those lasers used to solder circuits in factories, lasers that scan groceries in a supermarket, and lasers used to entertain a crowd with a light show in the night sky.”