Grumman’s Avenger: The Most Effective Torpedo Bomber of WWII 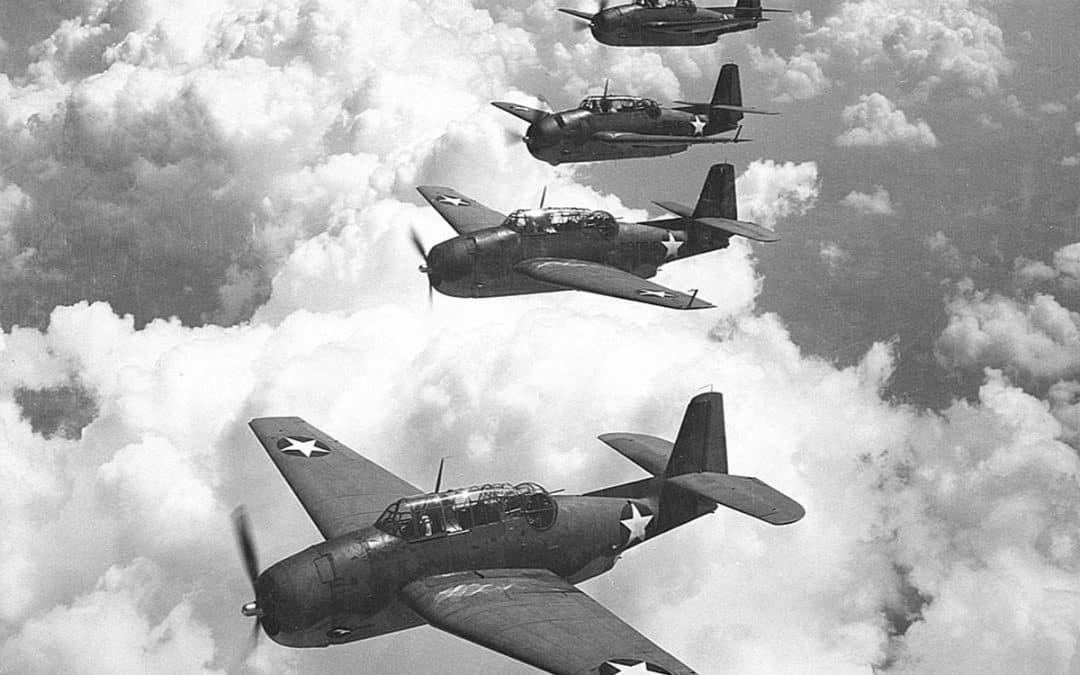 The Douglas TBD Devastator torpedo bomber was the U.S. Navy’s first all-metal monoplane carrier aircraft, joining the fleet in 1937. However, by 1939, the Devastator was already obsolete. War had raged in China for years as Japan sought to conquer its Asian neighbor. War was looming in Europe as well; Nazi Germany continued to gobble parts of other nations. By most accounts, World War II officially began on September 1, 1939, when Germany invaded Poland. As war began, German and Japanese aircraft were generally more advanced than those of the Allies.

Knowing they were behind, the U.S. armed forces were working desperately to improve their armaments. Several companies bid on building a new torpedo bomber; Grumman Aircraft’s design was chosen by the Navy. In April 1940 two prototypes were ordered. The Navy then ordered 286 torpedo bombers in December 1940. Designed by Leroy Grumman—founder of the company and an aerospace engineer—the prototype was the XTBF-1, first flown in August 1941.

On the afternoon of December 7, 1941, Grumman held a ceremony to open a new manufacturing plant and display its new Avenger torpedo bomber to the public. When Grumman officials learned of the attack on Pearl Harbor, the facility was quickly sealed off against possible sabotage.

In January 1942 the first production TBF-1 joined the fleet and the Avenger quickly went into mass production. During the first half of 1942, 145 TBFs were delivered.

Powered by a Twin Cyclone Radial

The Avenger was powered by a Wright R-2600-20 Twin Cyclone 14-cylinder radial engine that generated 1,900 horsepower. Each Avenger held three crew members – pilot, turret gunner, and radioman/bombardier/ventral gunner. The airplanes only had one set of controls, and there was no direct access to the pilot’s position from the aircraft’s interior. Radio equipment was large and cumbersome, and filled the length of the “greenhouse” canopy to the pilot’s rear.

A synchronized .30-caliber machine gun was mounted in the nose, a .50-caliber gun was mounted next to the turret gunner’s head in a rear-facing electrically powered turret, and a .30-caliber hand-fired machine gun mounted under the tail was used to defend against enemy fighters attacking from below or the rear. Later models of the TBF/TBM replaced the cowl-mount .30-caliber gun with twin Browning AN/M2 .50- caliber guns, one in each wing outboard of the propeller arc. These guns gave pilots better forward firepower and increased the airplane’s strafing capabilities.

The Avenger was built with a large bomb bay that held either one Mark 13 torpedo, a 2,000-pound bomb, or up to four 500-pound bombs. It was a rugged but stable airplane said to fly like a truck. With a 30,000-foot ceiling and a fully loaded range of 1,000 miles, the Avenger was superior to any previous American torpedo bomber, and far better than its Japanese counterpart, the obsolete Nakajima B5N “Kate.”

To ease aircraft carrier storage concerns, Grumman designed the Avenger (as well as the F4F-4 Wildcat carrier fighter and the later F6F Hellcat) to use the new Sto-Wing patented “compound angle” wing-folding mechanism.

After hundreds of TBF-1 models were delivered, the TBF-1C began production. Space for specialized internal and wing-mounted fuel tanks doubled the Avenger’s range. With capable radios, fairly easy handling, and long range, the Avenger was also a good command aircraft.

In 1943, Grumman began to phase out its production of Avengers to manufacture Hellcat fighters. The Eastern Aircraft Division of General Motors, with manufacturing facilities in Maryland, New Jersey, and New York, began to produce Avengers under license (designated TBMs). In mid-1944, production of the TBM-3 began. It was equipped with a more powerful engine and wing hardpoints for drop tanks and rockets.

By early June 1942, more than 100 Avengers had been delivered to the Navy, but they were too late for the pivotal Battle of Midway on June 4, 1942. However, six Avengers had been assigned to Torpedo Squadron 8 on Midway Island for evaluation. The aircraft and their crews arrived on Midway three days before the battle. None of the pilots had ever been in combat, and few had ever flown out of sight of land. Operating from the island’s airstrip, the Avengers and other aircraft attacked the Japanese fleet. Five Avengers were shot down, and the last was badly damaged.

Author Gordon Prange wrote in Miracle at Midway that dive bombers were responsible for sinking four Japanese fleet carriers. He noted that the obsolete Devastators—and having too few Avengers on hand—contributed to the lack of a complete victory at Midway.

After the Americans captured Guadalcanal, Japanese Marshal Admiral Isoroku Yamamoto organized a large naval counter-strike in the Eastern Solomons. On August 24, 1942, Japanese and American carrier forces met. According to the Naval Air Station Fort Lauderdale Museum, the Saratoga and Enterprise had a total of 24 TBFs. During the afternoon and evening, Avengers were launched in four different strikes. In the second strike, torpedoes struck the light carrier Ryūjō and helped to sink her at the cost of seven aircraft.

In the war’s fourth big carrier engagement (the Battle of Santa Cruz, on October 26, 1942), Avengers did not play a major role. The two surviving U.S. carriers in the Pacific, USS Enterprise and USS Hornet, each carried 14 Avengers. Although the carriers helped stop the Japanese effort to retake Guadalcanal, most of the Avengers were shot down by Japanese combat air patrol and anti-aircraft guns.

These early battles showcased the strengths and weaknesses of the Avenger, but also exposed the deficiencies of the Mark 13 torpedoes used by the U.S. Navy during the first two years of the war. Because of the torpedoes’ poor performance, torpedo bombers flew many missions carrying 500-pound bombs instead.

A TBF-1 Avenger early in 1942. Note the red spot centered in the U.S. roundel and flag-inspired fin flash on the rudder, both of which were removed prior to the Battle of Midway to avoid confusion with Japanese insignia. [Photo: U.S. Government]

The Japanese continued to attack Guadalcanal. From November 12 to 14, 1942, the naval Battle of Guadalcanal took place. Leading the powerful Japanese naval forces was the Hiei, a 37,000-ton battleship. Marine Corps and Navy Avengers torpedoed and helped sink the Hiei.

Although the Avenger was a sound aircraft, the National Naval Aviation Museum notes that increasingly effective Japanese anti-aircraft capabilities, combined with vulnerability during torpedo runs rendered traditional massed torpedo bomber attacks less likely after Midway. “The Torpedo Bombers,” an article in the October 1944 issue of FLYING, stated, “torpedo attacks must be delivered at a comparatively short range and amid heavy enemy AA fire. Torpedo bombers no longer creep in low over the water. They move in with the dive bombers and at high altitudes under the same fighter coverage.”

“The Torpedo Bombers,” also stated, “…Grumman Avengers had sown mines in the harbor at Palau. This job was so well done that no ship in the harbor at the time of the mine planting ever got out. Thousands of mines had been laid by aircraft, but this was the first time carrier-based planes had, with fighter protection, gone right into the enemy’s front yard and done the job.”

In November 1943, the U.S. Navy began systematic night-fighting teams. From the Enterprise, Avengers and Hellcats were directed toward incoming Japanese bombers. Radar-equipped Avengers would lead the Hellcats behind the bombers, close enough for the Hellcat pilots to see their exhaust flames so that they could be shot down.

During the “Marianas Turkey Shoot” (June 19 and 20, 1944), more than 350 Japanese aircraft were downed (primarily by Hellcats). A 220-aircraft mission followed, seeking the Japanese task force. Fighting 300 nm from the fleet, Hellcats, TBFs/TBMs, and dive bombers suffered many casualties. However, Avengers from the aircraft carrier USS Belleau Wood sank the light carrier Hiyō.

On October 24, 1944, Avengers were instrumental in sinking the Japanese super-battleship Musashi in the Battle of the Sibuyan Sea. In the next day’s Battle of Leyte Gulf, Avengers helped keep Japanese surface ships from exposed U.S. troop transports. On the 26th, TBFs also helped sink Zuikaku and three light carriers.

By late 1944 the U.S. Navy had almost complete air superiority. On April 7, 1945, the remaining Japanese super-battleship—Yamato—made a desperate run for Okinawa.

In 1997, Charles G. Fries, Jr. a TBM tail gunner, described the attack to the Naval Air Station Fort Lauderdale. “…we went after the last remnants of the Japanese Fleet, which comprised the battleship Yamato, the cruiser Yahagi and two screen destroyers. When we came into range, the squadrons split into two sections. The first TBMs got the wagon [Yamato], and she was severely damaged, ready to sink. So we went after the cruiser… Both big ships and the destroyers put up a lot of flak. After firing our torpedo, we were pleased to see the cruiser go down. Later another destroyer went down too. …we sank three of the four Japanese ships. As far as we were concerned, the Japanese fleet was no more.”

As noted by the National WWII Museum, Avengers “effectively interdicted enemy shipping and delivered ordinance on enemy positions throughout the Pacific war.”

As well as torpedoing surface ships, Avengers were very effective submarine hunters in the Pacific theater. Because of this prowess, Avengers also were used in the Atlantic, helping escort Allied convoys. “Avengers could launch off the shortened decks of escort and light carriers,” noted worldwarIIaviation.org.

In the North Atlantic, Avengers destroyed 30 submarines, including the unique sinking of the Japanese cargo submarine I-52. Flying from escort carriers, the Avengers became the key strike aircraft in the Allied hunter-killer groups.

After the war Avengers continued flying in the U.S. Navy, primarily as missile platforms, in anti-submarine, electronic countermeasures, and for training. The last Avengers were retired from the U.S. Navy in 1954.

The post Grumman’s Avenger: The Most Effective Torpedo Bomber of WWII appeared first on FLYING Magazine.