Halter Ranch Offers Wine With a View From Above 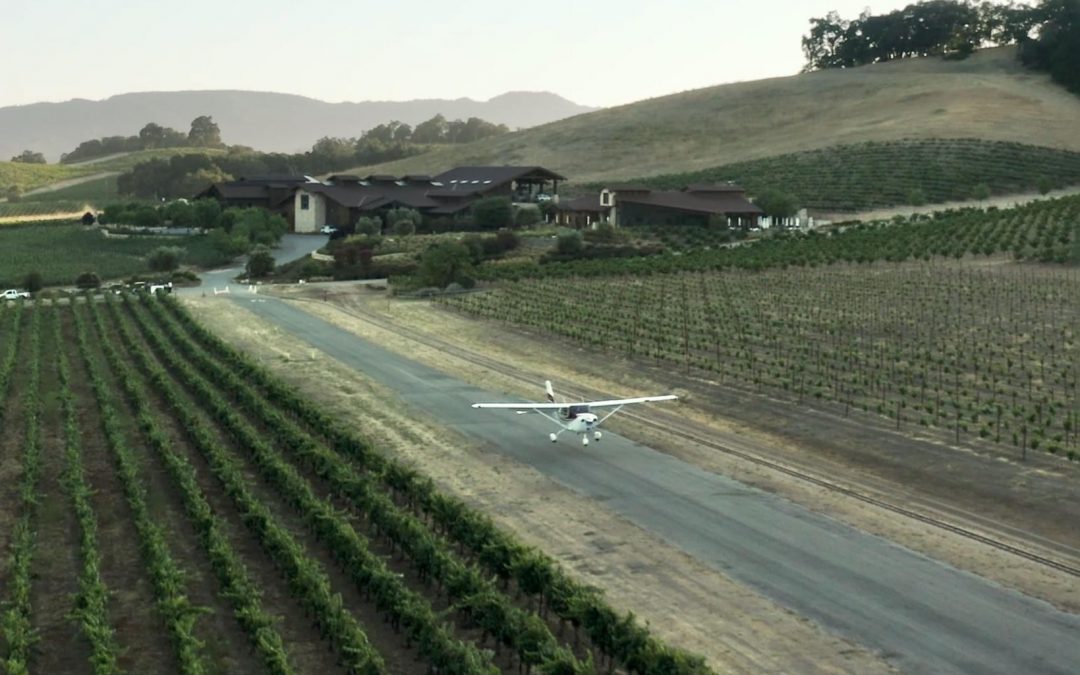 Halter Ranch, in Paso Robles, California, is a one-of-a-kind vineyard and winery. Aside from a selection of award-winning wines, sourced from grapes grown on property, Halter Ranch is host to the only public-facing runway located at a vineyard.

Gracie Nino, the company’s marketing manager, notes that the 3,353-foot by 25-foot paved airstrip (89CA) is a distinctive feature of the property. While the airstrip was just only recently reopened to the public in 2021, its roots extend all the way back to 1967. At that time, the property’s owner commissioned the airstrip’s addition to the large acreage ranch for a specific reason.

The runway’s initial purpose was to accommodate guests traveling from different parts of the state. As Halter Ranch’s website explains, the community was often invited to participate in short landing contests, flour sack bombings, and airshows. On any given day, there were reportedly up to 15 airplanes at the ranch, with fly-in patrons experiencing one of Californian aviation’s most active sites. One aircraft of the many that had flown into the site included then Governor Ronald Reagan, who arrived in his Aero Commander.

With the exception of the slump of general aviation in the 1980s, the airstrip has long been a feature of the picturesque property. It wasn’t until more recently, though, that the multi-thousand-acre land was used as a vineyard and winery.

“I think that the first grapes were planted in the 1990s by the MacGillivray family, who were the previous owners [since 1943]. So it was a winery, but they [only] had a couple of acres of grapes. Then when the current owner, Hansjörg Wyss, bought the property in 2000, that’s when more grapes went in. They went into the existing field that was already being used,” Nino said.

Nino added that Halter Ranch’s founder and owner, Wyss, is a pilot and general aviation enthusiast. Additionally, the property’s general manager, Bryce Mullins, is a student pilot. Their and others’ efforts ensure that the airstrip is accommodating to the next general of Halter Ranch Airport visitors.

“Both our owner and general manager were both really excited about the history that has to do with the airstrip,” Nino said. “They, for quite a while, had been busy working on getting it re-established and did a couple of renovations to it during that time frame.”

An aerial view of much of the Halter Ranch Airport property, including its 3,353-foot-long asphalt runway. [Courtesy: Halter Ranch Vineyard]

Nino advises that the runway is now a benefit for members of Halter Ranch’s Wine Club. In that vein, she introduced FLYING to one of Halter Ranch’s first aerial visitors, Steve Cox. Cox is a former F-15C aviator, and presently flies the Boeing 737 and 1964 S-35 Bonanza, is building a 2023 RANS S-21 bushplane, and produces the the YouTube channel, Cleared Direct.

He recently crafted a 20-minute video highlighting his experience flying to 89CA. Some highlights of the video include considerations for landing, a pre-departure briefing and, of course, an overview of the wine tasting experience.

“I first became aware of Halter Ranch when my wife showed me an Instagram post of our friend flying into the place where he grew up, which happened to now be a fly-in vineyard on the Central Coast of California. It really got my attention since the Central Coast is one of my favorite places in the world having gone to Cal Poly, SLO [San Luis Obispo]. I was also excited to learn that my high school classmate Kevin Sass was the winemaker!”

Cox’s positive experience at Halter Ranch makes it easy for him to suggest the site to other aviators looking for a unique place to fly to.

“I would absolutely recommend this fly-in trip to other pilots. It’s truly what general aviation is all about. Going to unique destinations and enjoying great people and experiences. With a little pre-flight prep and good weather, this is a no-brainer.”

Cox continued his explanation, “The pilot accommodations are new and well-appointed with a subtle aviation theme. One cottage is just the right size for one or two overnights for two people. We brought some simple provisions to make some pasta and veggies to go with our delicious Halter Ranch wine. There was a full kitchen which made cooking fun. There are plenty of outdoor activities to enjoy with friends such as a fire pit, horseshoes, and even a pool,” Cox said. “There’s laundry in case you want to stay longer and still travel light.”

The post Halter Ranch Offers Wine With a View From Above appeared first on FLYING Magazine.