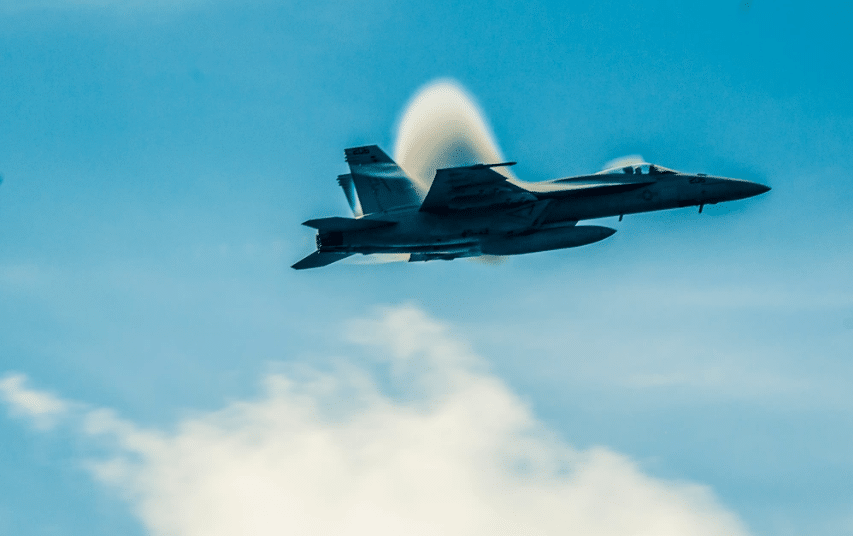 In the ever-growing struggle to combat global warming, could fighters be pressed into service to make clouds to shield the planet from the sun?

It’s an idea RAF Luton, an aviation parody account on Twitter, proposed recently alongside a photo of a F-18 swaddled in a puffy cloud.

Fact of the Day: F15 fighter jets carry clouds to the sky as part of Operation Sunshade. The clouds are released at 80,085ft where they provide shade from the sun which helps cool the planet #ClimateActionNow #Sustainability #ClimateEmergency

Photographed from a Canberra #AvGeek pic.twitter.com/OeWqpgkPCj

Fighters cannot carry clouds to the sky, even if they’re tasked as assets in a mission with a fun and fictitious name like “Operation Sunshade.”

Aircraft such as the F-18 can, however, create their own clouds, if only for a moment.

Clouds In The Sky

Turns out, punching through the sound barrier can lead to magical things happening.

A sonic boom sounds like a loud thump of thunder and occurs when the aircraft flies faster than the speed of sound, which is about 768 mph at sea level.

Here’s how NASA explains it: “Air reacts like a fluid to supersonic objects. As objects travel through the air, the air molecules are pushed aside with great force. This force forms a shock wave, much like the wave created by the front, or bow, of a boat moving in water,” NASA said.

The shock waves build up and compress.

Faster Than A Speeding Bullet

Once an aircraft’s pace blows past the speed of sound, the airspeed indicator moves into an entirely different category: Mach speed.

While Superman may have flown faster than a speeding bullet, it was an exploding projectile fired from a gun that ultimately changed the course of how supersonic airspeed is measured.

In the 1860s, The Declaration of Saint Petersburg became the first formal agreement banning the use of certain ammunition in war after the Russian military had adopted use of a bullet that would explode on impact with a hard surface. The bullet had been originally designed to detonate wagons of ammunition but had been modified to explode with a soft substance. “[T]he Russian government, unwilling to use the bullet itself or to allow another country to take advantage of it, suggested that the use of the bullet be prohibited by international agreement,” according to the International Committee of the Red Cross.

Following the agreement, however, crater wounds once again appeared on the battlefield, which prompted physicist Ernst Mach to study the root cause. His ballistic research would forever change the world of aerodynamics and engineering. “By 1885, Mach had worked out the details of supersonic motion, along the way developing high-speed photographic techniques,” according to the Stanford Encyclopedia of Philosophy.

In 1887, Mach documented what would later become his namesake measurement of speed with a photograph—the first of its kind—documenting the shock waves of a bullet traveling at supersonic speed.

More than 100 years later, supersonic speed is still making great photos. When conditions are just right, the sonic boom from an aircraft can create a vapor cone, which resembles a cloud.

It was a scenario that played out beautifully in a photograph taken on a humid day during the precise moment a U.S. Navy ensign on the USS Constellation heard the sonic boom of an F/A-18 soaring overhead.

“The lowered pressure condenses the water in the air, creating a vapor cloud,” Rossmann wrote. “As the jet produces these pressure waves and propagates ahead of them, the regions of lower pressure are usually strongest behind the nose of the jet, on the wings and body. As the aircraft continues to speed up, the vapor cloud will appear farther toward the rear of the aircraft. Then, just as the aircraft bursts through the sound barrier, the air is locally disturbed by the resulting shock wave and the condensation/vapor cloud disappears.”

It’s a maneuver commonly performed by U.S. Navy pilots, notes the BBC. “Many of the best pictures of this phenomenon feature aircraft flown by the U.S. Navy; no accident, given that the warm, moist air close to the surface of the sea can help amplify the effect.”