How Not to Fall Off Your Airplane 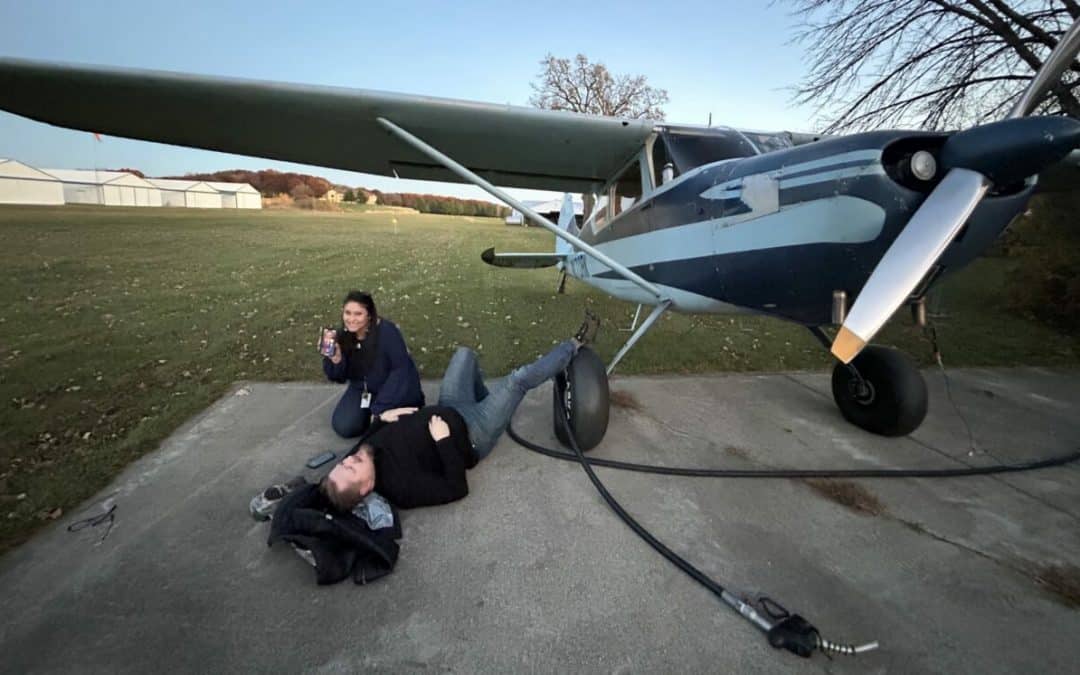 The 911 dispatcher was very confused. “Wait, you’re saying he fell out of his airplane? Where is the airplane now?” she asked. Patty, the woman who ran to my aid, clarified, “No, he fell OFF of his airplane. He wasn’t flying at the time. The airplane’s right here.”

Patty went on to explain to the dispatcher that I had been fueling my airplane when I lost my footing, fell to the concrete, and was now in excruciating pain. Bones were probably broken, but my head appeared to be fine. The dispatcher, finally understanding the situation, advised that an ambulance was en route and would be on the scene shortly.

The incident was both stupid and scary. After knocking out about 10 landings in mildly gusty winds, I taxied over and began fueling my airplane. Because my airplane lacks the convenient foot steps and handholds installed on many other Cessnas, I performed my usual acrobatics and leapt from the tire to the bottom of the wing strut, never using my hands for anything other than holding the fuel nozzle and hose over my shoulder.

After topping off the right tank, I stepped backward with my left foot, intending to hop back to the tire and then lower myself to the ground. Instead, my foot immediately slid off of the slick rubber and I fell backward, landing directly on my right shoulder blade from about six feet up. I heard an audible snapping sound. The pain was immediate and intense.

READ MORE: The Power of the Local Aviation Grapevine

Fortunately, the local paramotor school was operating that evening and the owner, Paul, heard my screams. I always admired Paul and how his operation is so good about monitoring the CTAF (common traffic advisory frequency) and sequencing around fixed-wing traffic. As he ran up to me accompanied by Patty, a paramotor student’s wife, he began calming me down and my appreciation for him became even greater.

Wisely, Paul ensured I didn’t attempt to get up and insisted I remained still as Patty called 911. He held my hand, helped me to control my breathing, and helped to relay information to the dispatcher. After the critical info was provided, I asked Paul for an additional favor. “Hey man, can you take a picture of me lying here with 911 on the line? I’ve been struggling to figure out what I’m going to write about for my next FLYING article, and I think this may have just solved my problem.”

Paul happily complied and also helped me to contact my friend Dan, a Cessna 182 owner who had previously owned a 170 like mine. Within minutes, both Dan and the ambulance showed up. As I was being examined by the EMTs, Dan finished fueling my airplane and taxied it back to my hangar for me.

The EMTs determined there was no evident damage to my spine or skull but strongly advised going to the hospital to get checked out. In an effort to avoid a five-figure insurance bill, I declined ambulance transport and instead took Dan up on his offer to drive me to the hospital in his pickup.

There, multiple CT scans determined I had broken two ribs in my back and one rib up front. I was admitted and spent the following two days at the hospital attempting to manage the pain. As it turns out, there is no actual treatment for broken ribs, and I’ve been slowly recovering at home ever since.

But, I got lucky. No permanent damage, a fully intact skull and spine, and no messy compound breaks that threaten internal organs. A good friend of mine once wrote: “A bullet dodged should carry a lesson learned. It is for you to find.” Looking back, I can easily identify some lessons.

Second, I should have a standing agreement with some trusted local airport friends to serve as each others’ emergency contacts. For this incident, Dan came through in spades to put my airplane away and give me a lift to the hospital. But it would be smart to make these sorts of arrangements with local friends ahead of time, placing myself on their emergency contact lists as well.

Third, I should keep my Garmin inReach satellite communicator attached to my person, even when I’m not actively flying my airplane. Had the paramotor people not been out on the runway, I would have been alone at a completely deserted airport at dusk, a mile or more from any help. Although I’ve got my cell phone, my reception is terrible at the airport, and I would likely have suffered for quite a while as I determined my next move. Had the inReach been clipped to a belt loop, I could have simply reached down, pressed the “SOS” button, and summoned help that way.

READ MORE: Ask FLYING: Do I Need To Learn How To Refuel My Airplane?

Finally, I should never take good friends for granted. Paul, Patty, and Dan all left me with standing offers to drive me home from the hospital and help as needed, as did our new airport tenant, Max. My mom heroically drove to Wisconsin from Michigan to be my caretaker, and my Michigan friend Marty offered to do the same. Finally, my friend Jim offered to fly my airplane as needed to keep it from sitting while I heal.

For now, I’m out of commission for another few weeks. Everything is painful, from getting out of bed to lifting a glass of water. And it’s really frustrating to not be able to go up and view the fall colors from above.

But the more I think about it, the more fortunate I feel to have not suffered more serious damage. And the more thankful I am to have such a great circle of friends and family willing to help out. Perhaps most of all, I’m thankful I didn’t fall out of my airplane while flying, as the 911 dispatcher initially thought.

The post How Not to Fall Off Your Airplane appeared first on FLYING Magazine.