How To Make a Living as a Hot Air Balloon Pilot 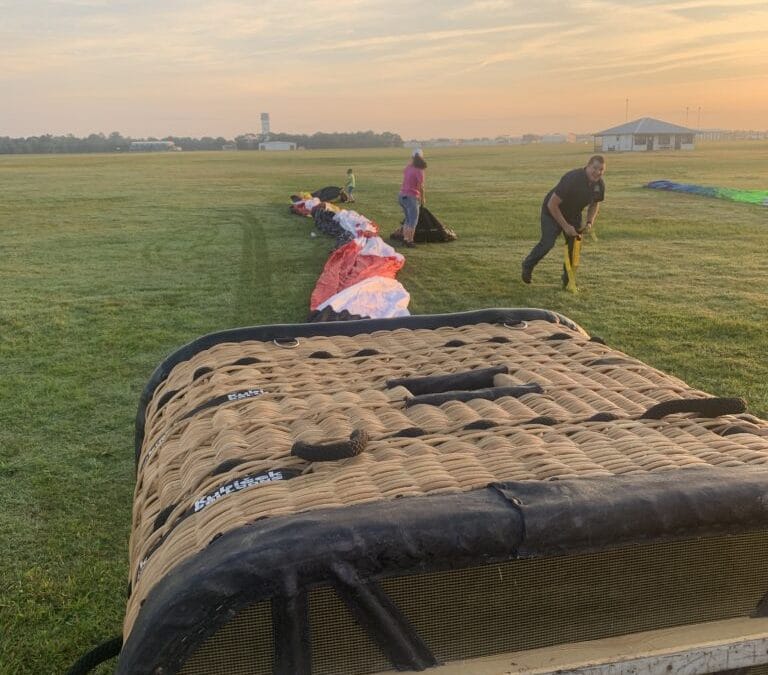 Hot air balloon pilots will tell you that flying them is something that gets under your skin, a passion that ignites your soul—almost like the burners that keep their balloons aloft. But pursuing that passion can also be a way to make a living. Balloon pilots with business savvy often turn what starts as a hobby into a side job that not only pays for the travel and expenses associated with ballooning, but can also build college funds for their kids, or be a secondary income for their families. And, for those who hustle and have the good fortune of landing a corporate advertising contract (or two), it can become a full-time career.

The Up Up & Away Florida Hot Air Balloon Festival held May 6 through 8 in Lakeland was a showcase for business-oriented balloonists—who flock to dozens of festivals year-round to promote corporate brands, and/or sell passenger flights and tethered balloon rides.

Patrick Smith, a full-time property casualty insurance agent for Aviation Insurance Resources (AIR) who is also a certificated commercial balloon pilot, traveled nearly 1,000 miles from Frederick, Maryland, to the festival with his wife, Meagan, and four children. The couple, which owns and operates Smith Ballooning LLC/Tailwinds Over Frederick, a balloon ride business, go to multiple festivals throughout the year, and offer flights in and around their hometown.

Smith says the business, which is building college funds for his kids, marries well with his full-time career. As the program manager for the lighter-than-air division at AIR, when he’s setting up and flying one of his four balloons at festivals, he’s also available to meet with new and existing AIR clients. “Coming to festivals like this, this is how I connect with my insured,” he says. But he maintains the insurance sells itself. “I’m able to go out and just be a pilot…When I’m out here I rarely think about the insurance side. But I do wear the [AIR company] shirt.”

At the Up Up & Away Florida festival, Smith flew first-time balloon passengers Judy Rasberry and her brother Wally Lewis in his Maryland One balloon—which portrays the Maryland flag on its envelope. Smith says taking people on their first balloon flight is his favorite part of the business. It was Lewis’s 70th birthday and the flight was his sister’s birthday present to him. “Wally was so excited,” Smith says.

The balloon business can be tough, though. Typically, weather patterns—especially winds—are optimal for ballooning in the early morning and the late evening. Depending upon where you live or operate, this gives pilots only two, somewhat short timeframes to fly—and not a lot of scheduling flexibility. That’s why most balloon pilots operate their business as a side job.

Chris and Amanda Sabia would agree. “It’s always full-time, part-time, if that makes sense,” Amanda says. “Because of the weather, you can’t count on it 100 percent of the time, so you got to have another job.”

Both commercial lighter-than-air pilots, the Sabias are also Realtors, and Chris is a CRJ captain for a regional airline. “He got his real estate license to help me; and I got my balloon license to help him. We stay busy,” Amanda says.

Because their real estate and airline pilot jobs are relatively flexible, they’re able to devote a substantial amount of time to their balloon business: Kansas City Aerosports, which focuses on brand promotion, aerial advertising, events, and sales.

Since 2001, the Sabias’ bread (and butter), literally, has been Wonder Bread. Their balloon company is the exclusive owner/operator of the Wonder Bread Hot Air Balloon. Discovered by Wonder Bread when they did their first commercial for a Fox News TV affiliate in Kansas City, the corporate contract launched the Sabia’s balloon operation from giving local rides and promoting small businesses to national product branding.

The Wonder Bread Hot Air Balloon, piloted by Chris Sabia, was the first to inflate at the Friday night balloon glow event at the Up Up & Away Florida festival, held May 6-8. [Photo: Sara Withrow]

“Once we got onboard with Wonder, we started traveling the country,” Chris says. “We did about 17 to 18 cities every year from May to October. We traveled coast to coast, north to south, flying at events and festivals, just promoting the brand.”

This year, the Sabias have about 15 festivals scheduled for Wonder Bread. Maximum airtime is their goal, as the balloon envelope promotes the “wonder” of ballooning, which, incidentally, is what the bread was named for. To that end, the Sabias were the first to inflate their balloon at the Friday night balloon glow at Up Up & Away Florida, despite a relatively brisk surface wind (for balloons).

A few hundred people gathered to watch as pilots and crew also erected the Cosmic Crisp and the Freedom Flyer/2nd Wind balloons, and all three pilots ignited their burners in concert—cued by an announcer from a nearby stage. Leery of the surface winds, nine to 10 other balloonists lit up the night with “candlestick burns” from their gondolas—without inflating their balloons.

The balloonmeister/flight director at the festival, Scott McClinton, became the de-facto meteorologist at the event, warning balloon pilots of impending weather. In this case, a front that had dipped into central Florida created wind gusts exceeding 20 knots aloft, canceling Saturday’s flight activities. At the Sunday morning launch, however, upwards of 20 balloons took to the sky.

McClinton says many balloon pilots count on flying passengers and giving tethered balloon rides at festivals to pay for their expenses and earn income. And tethered balloon rides, where the balloon ascends approximately 25 to 75 feet in the air while tied down, can be quite lucrative. “You can put four to six people in a basket at a time and the average tether ride turnaround time is 4 to 6 minutes,” McClinton says. Charging $20 per person or more, a pilot can rack up a profit over a weekend.

Balloons take to the air on Friday May 6 at the Up Up & Away Florida festival. [Photo: Sara Withrow]

McClinton has taken his balloon business to the next level, combining event management (balloonmeister activities) with aerial advertising/promotions, balloon flights, and tethered rides. The additional revenue streams make his business more immune to weather incidents that can threaten daily balloon operations and festivals.

McClinton employs three full-time staff and has 13 or 14 part-time employees. His oldest son, Matt, a licensed attorney, is the chief operations officer, and his youngest son, Adam, a fixed-wing flight instructor, manages the company’s Charlotte, North Carolina, location. And, McClinton’s childhood friend, Gary Dunlap, is his right-hand-man and the safety officer at festivals.

Like the Sabias, McClinton has been fortunate to get advertising contracts. “We have five sponsors now,” he says. They include national brands: US Bank (NYSE: USB-A), Kroger (NYSE: KR), and AT&T (NYSE: T). “My advice is if you want to make a million dollars ballooning, start with a two-million-dollar [goal], that way you’ll make a million,” he says with a laugh.

“Ballooning is more than just the rides; it’s a passion for flying but it’s also the people that are involved.”

It’s Not About the Money

Beyond money-making, ballooning has other rewards. Balloon pilots say it’s a tight-knit community, where fellow pilots and crew become like family. Patrick Smith, for example, is the “middle brother” of a pilot group that meets at festivals roughly three times annually, but keeps in touch year-round. “It is a family,” says Jessica Warren, who owns and operates American Balloons with her husband, Tom, and manages the hot air balloon event at the annual Sun ’n Fun Aerospace Expo. “This is your village. If you needed something, a balloonist would help you out no matter what you needed. Ballooning is more than just the rides; it’s a passion for flying but it’s also the people that are involved.”

For Smith, it’s also about honing his piloting skills. A former flight instructor who earned an aeronautical science degree from Liberty University, he says every pilot should consider getting a balloon rating.

“[With ballooning] it’s so still, very micro winds, small changes in direction, altitude, it’s an exacting form of flying. It’s harder than flying an airplane, I believe,” Smith says. With slim margins of safety, no brakes, no landing gear, and no target landing spot, ballooning is a challenge that can be addicting.

“I would love for every airplane pilot to take two flights,” Smith says. “Because adding a category on to your airplane certificate is very easy and two flights will tell you. You might buy a balloon after two, like me.”

For McClinton, the best part of ballooning is the connections you make with people. One of his passengers, in particular, left an indelible mark on him. The passenger had recently suffered a heart attack and spent nine days on a ventilator in the hospital. Her friends booked a balloon flight with McClinton to celebrate her life.

GALLERY: Up Up and Away Balloon Festival

“We take off. She was just amazed; she was looking around…I didn’t know it at the time, but they, literally, had just picked her up from the hospital, brought her out and got in the balloon,” McClinton recalls.

Subsequently, each time this woman survived another serious illness, her friends would book another balloon flight to celebrate her recovery. One day, McClinton got another call. “They said we want to buy her another balloon ride. I said, ‘Cool.’” He pauses, “We spread her ashes….She paid for four balloon rides. I gave her the last one for free. That’s the cool thing about this job. I took this lady full circle.”

The post How To Make a Living as a Hot Air Balloon Pilot appeared first on FLYING Magazine.