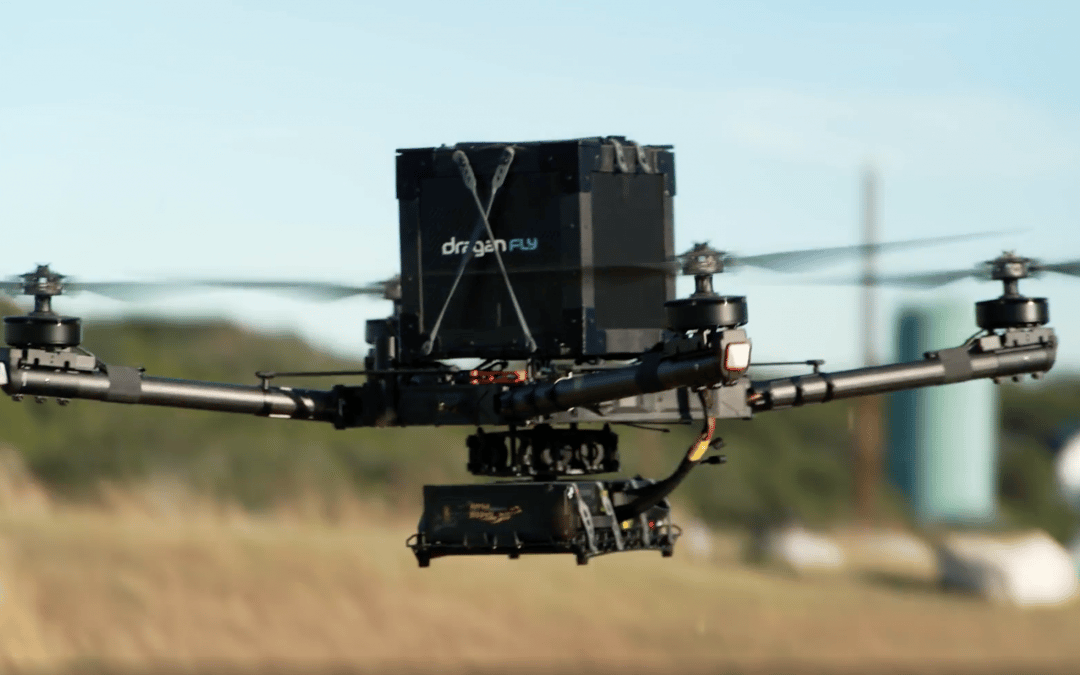 In a war zone, no one wants to walk up to a drone that lands without warning.

That’s one of several lessons the makers of Draganfly (NYSE: DPRO) drones have learned on the fly while operating in Ukraine, according to company CEO and co-founder Cameron Chell.

The medical response drones are outfitted with a temperature-managed payload box capable of transporting up to 35 pounds of medical supplies, such as blood, insulin, syringes, and wound dressings. The search-and-rescue variants are a high-endurance, multirotor drone capable of providing optical and infrared imaging to map certain areas and locate survivors.

As of Friday, RSU was using one Draganfly medical response drone (MRD) and two situational awareness drones that fly at an altitude of 4,000 feet, are very quiet and difficult to see, Chell told FLYING.

More are on the way. Five additional MRDs that have been upgraded from a 10-kilometer range to 20 kilometers, as well as five search and rescue drones, are being shipped to Ukraine this week, he said.

The increased range is one of several upgrades Draganfly has made to its drones for operations in Ukraine’s hostile war zone environment.

“They also have advanced optics, advanced first-personal flying capability, autonomous capability. They’re like a notch up from the original one that was sent over,” he said. “We learned a bunch from the first one that was [sent] there.”

The MRD drone’s payload box, for example, was initially top-loaded but is now capable of being delivered by a quick-release feature.

“They can either fly the equipment or the supplies in top-loaded on the drone, so somebody has to grab them from the drone, or they can be winched down or quick-released from about three feet off the ground. It takes about two seconds to do that,” Chell said.

The logistics of getting the drones into the Ukrainian theater has also been a challenge, the company has found. Once shipped from the U.S., there’s been about a two- to three-week lead time for the drones to arrive.

“We’re getting that down faster,” Chell said. “Basically, they go a bunch of different ways [and] they end up in Poland,” he said. “It’s tricky when you’re sending drones across international borders. And then, of course, the batteries are hazardous materials.”

The company now has a store of batteries in Europe that fit these particular drones, for example.

“Even in the best of times, it would take, you know, a couple or three weeks to get equipment there,” he said, adding, “Faster is always better, but we’re getting better at it.”

The ongoing conflict in Ukraine required technical upgrades, too.

“Basically all around the communications,” Chell said. “Encryption is incredibly important. Anti-jamming technology and techniques are incredibly important. The LTE networks that operate in that area operate on different frequencies. They are on 900 megahertz there, so we had to switch those comms out. And we had to gain local knowledge, as well, in terms of what altitudes are best or hardest to get jammed at?

“It’s a tricky situation,” he added. “You put a drone up, and nobody knows whose drone it is, so you’re as likely to cause confusion or create problems with Ukrainian troops or just Ukrainian civilians. They’re not used to a drone being a humanitarian device.”

RSU is working to communicate with Ukrainian forces in the region to coordinate its flight path, the organization’s president and founder Iryna Vashchuk Discipio told FLYING in April. “We hope they won’t get shot down,” she said. “With Russians shooting people, they will definitely shoot down a drone.”

As of late last week, none of the drones had been shot at, according to Chell, who added: “but we fully expect that will happen.”

In the U.S., the Draganfly platform has been used for public safety applications, such as ferrying medical supplies to emergency first responders in Texas.

“The protocol [in Texas] is that the drone lands on the ground, and that personnel come up, and just simply lift the—it’s a top-mounted payload—and so they lift the supplies off the top of the drone,” Chell said. “Well, civilian or otherwise, nobody in Ukraine’s gonna walk up to a drone, especially if they don’t know what’s coming and it just lands there. That’s the last thing they’re going to do, so we had to design a quick release system underneath.”

“You put a drone up, and nobody knows whose drone it is, so you’re as likely to cause confusion or create problems with Ukrainian troops or just Ukrainian civilians.”

When using the quick-release feature, the drone hovers above the target location for a couple of seconds and drops the temperature-controlled box containing insulin and antibiotics to the ground before taking off quickly.

While drones used for military surveillance typically hover for extended periods to try to get location coordinates, the MRD is never stationary.

“These [MRD] drones, the biggest advantage they’ve got going for them right now is they’re mission driven, they have a very specific purpose, so they’re moving in and out very quickly,” Chell said.

The search-and-rescue drones, by contrast, don’t tend to have this problem because they are being deployed in areas with search teams where there isn’t an immediate threat of active conflict. “Everyone is able to get deconflicted because they know there’s a search and rescue operation happening in that particular area,” Chell said.

Drone operation in Ukrainian airspace has become more prevalent since Russia’s invasion in late February. The Turkish-made Bayraktar TB2, for example, has played a critical role in Ukraine’s defense. The drones are capable of carrying up to four laser-guided munitions that have a reputation for being effective against ground-based targets, such as Russian tanks and mobile air defense systems. They have a flight range of up to around 186 sm, and they can fly up to 27 hours at a maximum altitude of 25,000 feet. Takeoff, landing, and flight control are all fully automated.

In April, a 1,500-pound TB2 drone was credited as being an integral component in an Ukrainian operation that sank the Soviet-era missile destroyer Moskva. According to reports, Ukrainian forces used the drone to distract the Russian war ship’s air defenses before striking it with Neptune missiles.

From military applications, to humanitarian response, drones are changing the nature of modern warfare, Chell said.

“Drones have been the big equalizer. They’re a force multiplier, they can completely help level the playing field,” he said. “Literally, you can put up a $2,000 consumer drone and you’ve now got reconnaissance, you’ve got troop coordination, they can drop grenades. It’s nuts,” he said.

The bigger impact, however, likely remains to be seen with the use of drones for humanitarian aid, search and rescue, mapping and surveying, reconstruction, and demining—an initiative Draganfly is currently working on, Chell said. The applications in a hostile area could be conducted at a fraction of traditional costs, without the potential risk to lives.

“It’s game changing. It’s absolutely game changing,” Chell said. “I think we’re just seeing the beginning of not only the impact that drones will have for Ukraine, but actually the impact on both warfare and humanitarian and reconstruction. This will be the use case that will demonstrate an entire new type of platform being introduced into conflict.”