Huntsville aka ‘Rocket City’ Packs a Punch for Aerospace Fans 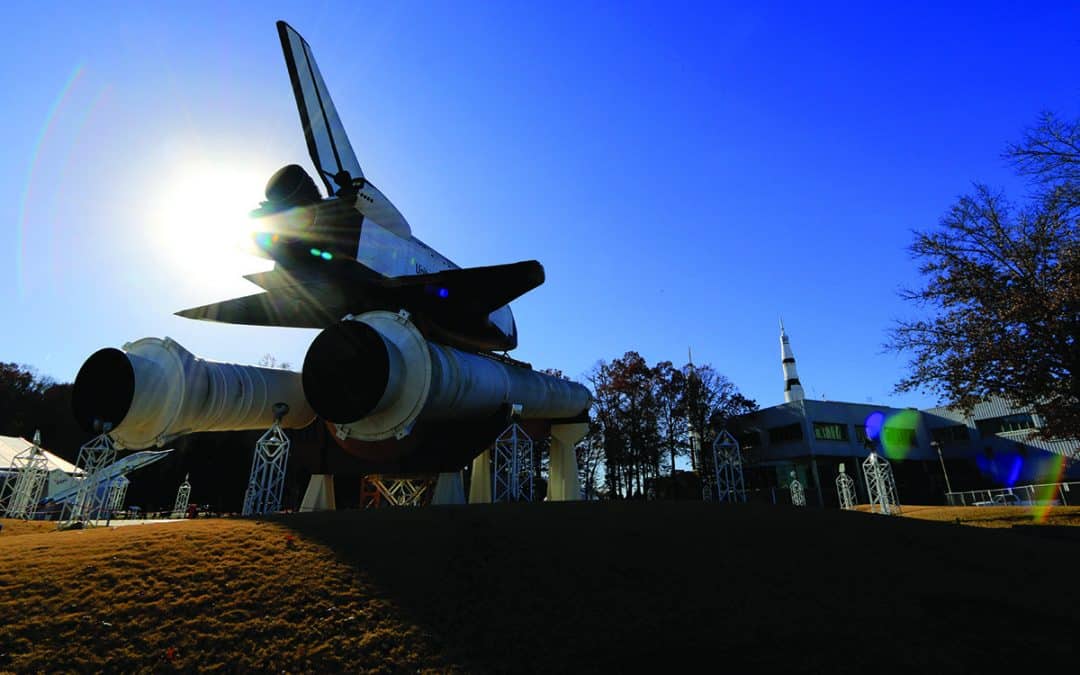 For an outsider, northern Alabama may seem an unlikely place for an aviation and aerospace center. But for those of us who know the history of Huntsville, aka Rocket City, as it’s been called since the 1960s, it makes perfect sense.

A popular pilgrimage site for aviation and space enthusiasts since the 1970s, Huntsville is known for being the birthplace of rocket and missile technology in the U.S. It’s here that the first rockets were developed that sent satellites into space and put men on the moon. At NASA’s Marshall Space Flight Center, located on the Redstone Arsenal Army base, scientists also designed modules for the International Space Station (ISS) and figured out how to propel the space shuttle.

Today, staff at the NASA Payload Operations Center monitor ISS science experiments round-the-clock from their mission center on the Army base, while others develop the Space Launch System rocket, which promises to take humans back to the moon, and beyond. The U.S. Space & Rocket Center, an affiliate of the Smithsonian and the official visitor’s center for NASA’s Marshall Space Flight Center, is a tourist attraction that also inspires youth to pursue aviation and space careers. The center’s renowned Space Camp, an avant-garde STEM education program when it launched in 1982, has trained nearly a million students. Its graduates include NASA and European Space Agency astronauts, airline pilots, and more. Building upon the region’s space legacy, the FAA recently licensed Huntsville International Airport (KHSV) as a commercial space reentry site.

Located in the Tennessee River Valley, the city is surrounded partially by mesas and low-elevation mountains associated with the Cumberland Plateau. Known for its karst topography—which is characterized by sinkholes, underground streams, and caves—before Huntsville earned its nickname as Rocket City, it was known as Cave City. Huntsville’s home county, Madison, has 240 caves, and at last count, the state had more than 4,700 caves. One of the city’s earliest white settlers, John Hunt, for whom the city is named, built his home near today’s Big Spring, which flows out of an underground cave near the town’s center. It makes sense why the National Speleological Society (NSS) has its headquarters in Huntsville.

Also known for its caves, the Huntsville area is home to 240 caves, at last count, and is a favorite destination for spelunkers of all skill levels. [Credit: Adobe Stock]

With the large number of caves in the area, spelunking is a favorite activity. The Huntsville Grotto, an internal organization of the NSS, coordinates monthly caving activities suitable for novices and for those with more experience and specialized equipment. There are several caves in the area that also offer guided tours. About an hour south of Huntsville along Hwy. 65, you’ll find Rickwood Caverns State Park. The cave features a 1-mile path that descends up to 175 feet below the earth’s surface. Another nearby cavern is Sauta Cave, which is a 40-minute drive from Huntsville. While you can’t enter this designated National Wildlife Refuge, in the summer you can view a nightly exodus of the up to 400,000 federally endangered gray bats that call it home. In the winter, both gray and Indiana bats hibernate there. One of the state’s best known public caves is Cathedral Caverns State Park, which offers cave tours, hiking, and camping, and is also a short drive from Huntsville. The cave has “one of the largest stalagmites in the world,” which stands 45 feet tall.

Ecotourism is a growing economic segment for the city of Huntsville and environs, which is known for its biodiversity and recognized globally for its variety of freshwater turtles, fish, snails, mussels and crayfish. [Credit: Adobe Stock]

The mountains surrounding Huntsville offer lots of hiking and camping options. Called the “Downtown Mountain,” Monte Sano Nature Preserve, operated by the Land Trust of North Alabama, is one of the largest urban nature preserves in the country. Just 2 miles from the city center, the 1,107-acre preserve offers more than 25 miles of hiking and biking trails, some of which connect to neighboring trail networks at Burritt on the Mountain and Monte Sano State Park.

Paddlers may enjoy a kayaking trip on nearby Flint River, which starts north in Tennessee and meets the Tennessee River about 10 miles south of Huntsville. An Alabama Scenic River Trail, the Flint offers 48 miles of paddling from its northernmost access point at Bell Factory to Ditto Landing. Several outfitters provide kayak and canoe rentals and transportation.

Populated by multiple varieties of bass, bluegill, longear sunfish, channel catfish, and bullheads, the Flint is popular for fishing as well. Bringing the kids to Huntsville? Brahan Spring Park, located within the city limits, has a playground and splash pad as well as a lake populated with bass, crappie, and catfish.

Ecotourism is also growing in the Huntsville area. Alabama ranks No. 4 in the U.S. for biodiversity and is recognized globally for its wide variety of freshwater turtles and fish, snails, mussels, and crayfish.

Dedicated to conserving the region’s ecosystems, the 112-acre Huntsville Botanical Garden offers year-round programming, nature trails, a children’s garden, a birding trail, and boasts “the nation’s largest open-air butterfly house.” Annual events like the Arbor Day Races’ 5K and 3K runs, and the holiday-themed Galaxy of Lights walking and driving tours invite visitors to experience the garden in different ways across the seasons.

Huntsville’s historic Big Spring Park is a downtown gathering place enjoyed by visitors and locals alike. The spring and a canal that at one time was used to transport locally grown cotton by boat to the Tennessee River were incorporated into the park in the early 1900s. Later, a lagoon and fountain were added. Today, the park regularly hosts concerts and other community events.

Art aficionados should check out Lowe Mill Arts and Entertainment, which claims to be the largest, privately-owned arts facility in the U.S. The remodeled factory houses 131 working studios for more than 200 artists and craftspeople, seven art galleries, a theater, several performance venues, and restaurants.
Looking for a place to shop, dine, and mix with the locals? Bridge Street Town Centre on the west side of town is a popular outdoor mall. It has a movie theater, an interactive children’s fountain, Venetian-style gondola paddle boats that you can rent, and a full-size
carousel for the kids.

Celebrations light up the sky around the Saturn V rocket displayed at the U.S. Space and Rocket Center. The center hosts several annual events and is open year-round for visitors. [Credit: Adobe Stock]

It goes without saying that the city’s main attraction is the U.S. Space and Rocket Center, which has one of the largest collections of rockets and space-related artifacts in the world, including one of three Saturn V rockets that German scientist Wernher von Braun and his team designed and built at nearby Redstone Arsenal to send Apollo astronauts to the moon. The center’s Intuitive Planetarium, the only one of its kind in the Southeast, offers immersive astronomy experiences featuring 8K digital technology, as well as movies that are projected on the full dome.

You’ll also want to stop at the historic marker on Franklin Street behind Alabama Constitution Hall Historic Park, as it commemorates the 25th anniversary of the Apollo moon landing: July 20, 1994. Embedded in the concrete walkway in front of the marker are the moon boot prints of astronaut Alan Shepard and the shoe prints of 25 local school children.

Originally called Twickenham, a name chosen by LeRoy Pope, who donated the land for the town, in 1811, Huntsville was incorporated and renamed in honor of John Hunt. In 1819, state leaders gathered here to petition Congress for statehood and to write the state’s constitution. The Alabama Constitution Hall Historic Park and Museum celebrates this history.

Spared largely from destruction during the Civil War, the city has antebellum homes that tell the story of the Old South. Walking tours of the Twickenham Historic District offer a look at the state’s largest collection of pre-Civil War era homes. Visitors can also tour the Weeden House Museum, a home/museum built in 1819, and the Historic Huntsville Depot and Museum, which is listed on the National Register of Historic Places. The third floor of the depot, built in 1860, displays preserved graffiti on its walls written by Civil War prisoners who were kept in the depot’s former bunk room.

In the 1940s, Huntsville was selected as a location for chemical weapons manufacturing for the war effort, and the Army established a 1,250-acre base, Redstone Arsenal. After World War II, the base became the rocket and missile facility where Wernher von Braun guided the development of the Redstone, Jupiter, and Pershing missiles, and the rockets that sent the first U.S. satellite into orbit and the first astronauts to the moon. These efforts earned the city its nickname of Rocket City.