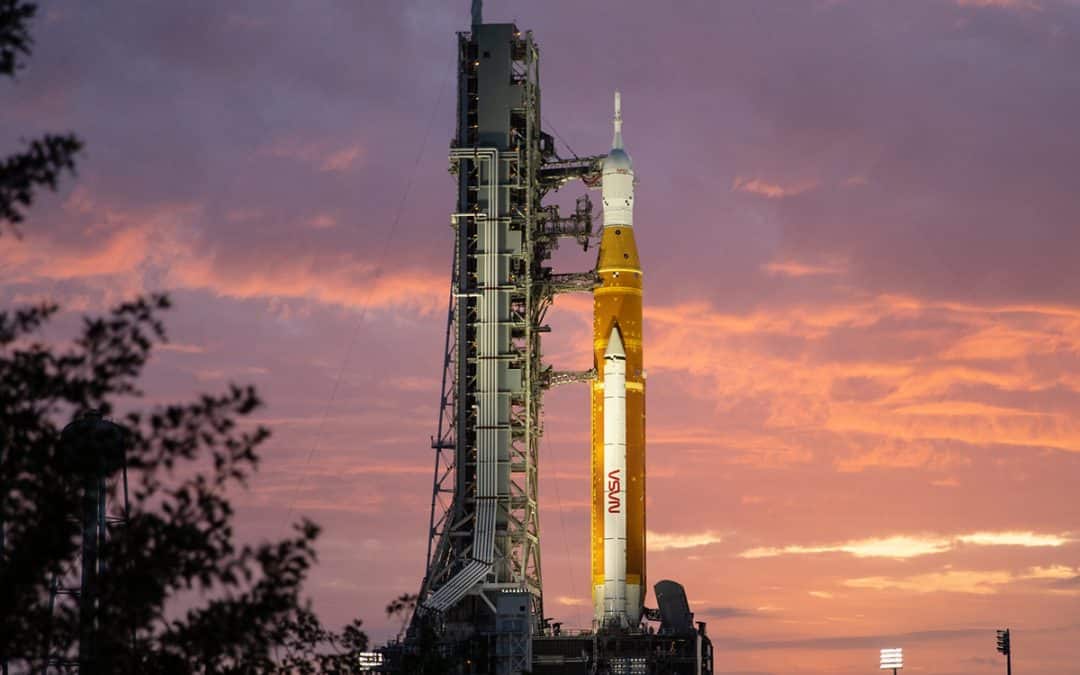 You’ve got to hand it to the folks at NASA. They know how to take challenges in stride.

The Artemis program has faced numerous delays after NASA waived off launch attempts on August 29 and September 3 because of mechanical issues, and again in late September, owing to weather concerns stemming from Hurricane Ian.

Last Friday, NASA began to prepare for the next window of opportunity: a liftoff attempt at 12:07 a.m. EST on Monday, November 14. The Artemis I Space Launch System (SLS) rocket and Orion spacecraft were rolled out to Launch Pad 39B. The 4-mile move from the Vehicle Assembly Building (VAB) was slow and methodical, taking several hours to complete.

In the interim, however, a tropical storm, which would later become Hurricane Nicole, formed and struck Florida, prompting NASA to push the launch to one of its backup dates: November 16.

Preparing for a Storm

Last week, as Hurricane Nicole began to form as a hybrid low-pressure system near Puerto Rico, NASA was already keeping its eye on the storm and its potential impact. During a media event, Jim Free, associate administrator Exploration Systems Development Mission Directorate at NASA Headquarters, expressed confidence in the technical preparations for the spacecraft but noted that a developing low-pressure weather system had captured the launch team’s attention.

During the media event, Free said the team would continue with its planned November 4 rollout to the launch pad.

“We’re confident in the decision process that went into that,” Free said at the time. “We talked about a lot of the same things, many things that we talked about with the hurricane (Ian).”

At that time, the storm was forecasted to bring sustained winds of 25 knots with gusts between 35-40 knots to the Cape Canaveral area. During the week, however, the subtropical system gradually strengthened. By the time the hurricane made landfall Thursday morning near Vero Beach, it had intensified to a Category 1 hurricane packing 70 mph winds.

Earlier in the week, on Tuesday, the National Weather Service issued a hurricane warning for all of Brevard County where Cape Canaveral is located, along with warnings for surrounding counties. Located near the forecast cone and close to the projected landfall area, Kennedy Space Center and the surrounding Space Coast communities were forced into storm preparation mode.

NASA switched into its HURCON mode, which follows a set of weather preparation guidelines based on the timing of an approaching storm. This process includes having a Rideout Team (ROT) deployed to secure and monitor the launch pad and other vital areas.

The Orion spacecraft sits atop the SLS rocket after being rolled out on November 4th. [Courtesy: NASA/Joel Kowsky]

Tuesday, as the storm approached, NASA officials confirmed the SLS rocket and Orion spacecraft assembly would be able to handle Nicole’s winds without damage.

“The SLS rocket is designed to withstand 85 mph (74.4 knots) winds at the 60-foot level with structural margin,” NASA said in a statement. “Current forecasts predict the greatest risks at the pad are high winds that are not expected to exceed the SLS design. The rocket is designed to withstand heavy rains at the launch pad, and the spacecraft hatches have been secured to prevent water intrusion.”

Wind gusts at the launch pad, however, exceeded the design specifications, according to a local meteorologist.

“… LC-39B, where @NASAArtemis is located has peaked out their winds at 100 mph … That’s beyond design limits of the rocket to ride out a storm,” Eric Burris, a meteorologist at TV station WESH 2 said in a tweet Thursday morning.

As of Thursday afternoon, NASA had not yet commented on wind gusts at the launch pad, or provided updates on the condition of the rocket.

Wow… sooo LC-39B, where @NASAArtemis is located has peaked out their winds at 100mph.

That’s beyond design limits of the rocket to ride out a storm… pic.twitter.com/un1GZSvuVA