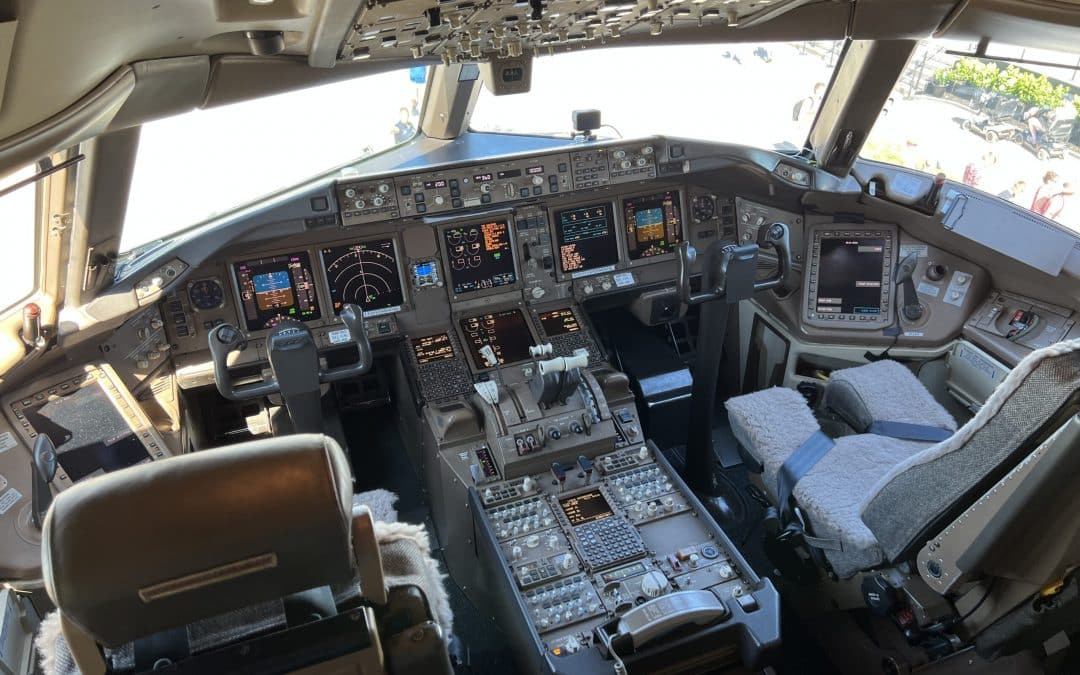 Celebrating a decade of turning airliners into flying test labs for environmentally friendly technology, Boeing brought the towering 777 to this week’s EAA AirVenture in Oshkosh, Wisconsin.

Throughout the passenger cabin of the widebody twinjet, orange devices–connected by tightly wrapped wiring–are strategically strapped to the floor.

With this equipment, flight test crews will gather performance data on a slew of new technology that could be included on airliners in the very near future. A wearable heads-up display currently being tested might allow pilots to see an enhanced vision system that could improve operational efficiency. Embedded in the wing surfaces, new smart vortex generators will be put through their paces, to determine if they can help the jet save fuel.

“We take these interesting technologies out of the lab and put them into an operational environment where we can see how they really perform compared to the lab environment,” said our host, Boeing ecoDemonstrator program manager Rae Lutters.

The number of flight test racks on this aircraft is expected to grow from one to six. [Photo: Thom Patterson]

To capture data from these new technologies, the airliner is outfitted with a flight test rack that will gather, display, and store live data during flight testing. Eventually, five other racks like this will be installed on the airliner, Lutters said.

The airliner will also flight test a blend of 30 percent sustainable aviation fuel (SAF)—the emerging new fuel made from renewable resources, such as used cooking oil and grain. Increasingly, SAF is being touted as one way to decrease carbon fuel emissions across the aviation industry. SAF burns cleaner than fossil-based fuels, and several airlines have been testing it in their fleets as a way to reach net-zero emissions by 2050.

Flight test crew piloting this ecoDemonstrator are expected to continue testing a head-worn heads-up display with an enhanced vision system (EVS), which was first tested in 2019. “What we’ve added this year is a camera that’s going to look outside and gather real-time terrain information about what’s going on in their field of view,” Lutters said. The device is intended to improve safety by enabling pilots to gain additional situational awareness during flight, especially in low visibility conditions.

The heads-up display system is being developed in collaboration with a company called Universal Avionics.

“Pilots are really excited about this,” she said.

Also on schedule for testing: one of the largest Boeing-made parts created by additive manufacturing—or what many know as 3D printing. Flight test engineers plan to fly the aircraft with an additive-manufactured engine bracket designed to secure wiring in one of the 777’s huge turbofan engines.

Ideally, components made with this process result in effective, lightweight aircraft parts that would help lessen the jet’s total weight, thereby saving fuel.

Outside a window overlooking the right wing, near its leading edge, we see a small rectangular device called a vortex generator embedded into the flight control surface. Test pilots will experiment with these devices during takeoff and landing to improve stall characteristics and efficiencies, Lutters explained. They don’t change the equation significantly when the aircraft flies at altitude.

After 10 years of Boeing’s ecoDemonstrator program, 230 projects have been tested across nine airplanes, including this one. Historically, about a third of those projects have actually been developed and entered operational status.

Overall, the program is about bringing the best new technologies aboard revenue-producing passenger flights in a relatively short time frame.

“The ecoDemonstrator provides us with a means to test technologies off of the certification programs,” Lutters said. The strategy aims to implement these new ideas more quickly—within one to five years—on Boeing aircraft.

The post Inside Boeing’s 777 ecoDemonstrator appeared first on FLYING Magazine.