Inside the Career of a Sport Pilot CFI 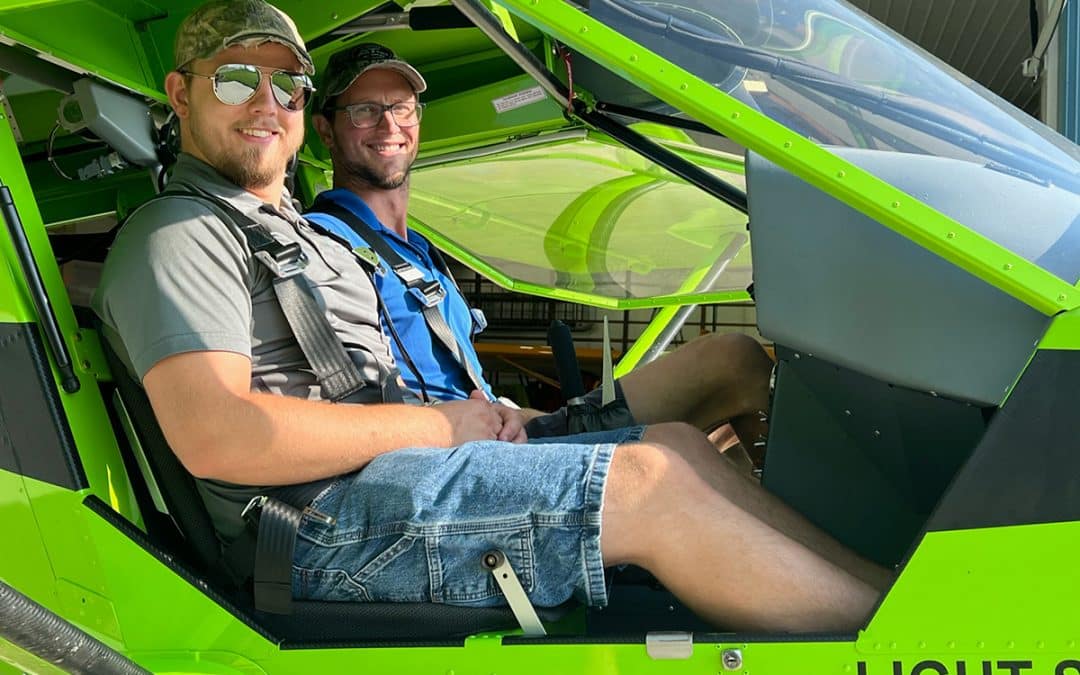 As a missionary in Peru, sport pilot CFI Jake Leonard learned quickly that aviation was going to be extremely beneficial in his effort to reach deep inside the jungle and preach the gospel to previously unreached people groups. He started flying in Peru to cut the two- to three-day, 400-mile boat trip (one-way) from Iquitos to his remote destinations, but Leonard realized he gained immense satisfaction from teaching others to fly, so he earned his sport instructor certificate.

With approximately 500 hours now in his logbook, Leonard is busy teaching sport pilot students from McKnight Airport (5OI8) in Johnstown, Ohio, operating from the field’s two turf runways in a Quicksilver Sport 2S, a 1938 Taylorcraft BC-65, a 1946 Taylorcraft BC-12D, and a pair of Aeroprakt A22 LSAs. Teaching under the banner of Heavenbound Aviation, Leonard is able to reach a wide spectrum of sport pilot students as well as certificated students who desire to earn a tailwheel endorsement or receive Part 103 ultralight training.

In speaking to FLYING, Leonard makes it abundantly clear that when it comes to teaching zero-time sport aviation students, there is a long list of variables that can determine the time and cost of training for each student.

Let’s dive deep into this topic, and view the career of a sport pilot CFI, from an instructor’s perspective.

READ MORE: An Inside Look at Modern LSA Ownership

CFI Jake Leonard performs the ceremonial cutting of the T-shirt tail after his student, Jeff Still, successfully soloed in the yellow 2014 Aeroprakt A22LS behind them. [Photo: Andy Humphrey]

Before the first lesson, Leonard digs into the student’s mission to determine just why they are seeking to earn their sport pilot certificate (which he calls an “SPC”). “We interview every potential student and try to establish what their aviation goals are,” Leonard said. “Being that we train in multiple different aircraft (Taylorcraft, Aeroprakt, and Quicksilver), knowing what the student’s goals are is very important in determining what aircraft they train in. Also what aircraft the student wants to own/fly after they get their license is important in determining what aircraft we train them in.”

There are many things to consider before a plan to train a student is made. Leonard asks if, for example, the student plans to fly a Kitfox, a Zenith, an RV-12, or maybe a low-mass, high-drag ultralight? Do they plan to fly tailwheel or nosewheel? What avionics do they want, touchscreen and autopilot or old-school steam gauges? “Once we have figured out what their overall mission is, we ask if they just want to fly on calm evenings and enjoy the sunset, or do they want to travel and do a lot of cross-country flying? Are they going to be flying off of a 5,000-foot paved runway, or their own 600-foot farm strip with a barn at the end? We try very hard to determine the best fit for each student and train them in the way that would be most helpful in their mission. Everyone receives the same fundamental training, but once they have their basics down, we press forward with training suitable to what their mission is,” Leonard explained.

READ MORE: You Can Be ‘Hands-On’ With Developing Future LSA Standards

Your Cost and Time May Vary

While the FAA has set a minimum number of training hours to earn an SPC, Leonard said he sees wide variations in the actual number of hours it takes to prepare his sport students for their practical test (check ride).

“It all depends on the learning ability of the student, and how well they are able to absorb and then apply the information that is being given to them,” Leonard said. “I would say the two biggest variables to this are age and determination. If the student is a young and determined 30-year-old, they have a really good chance of completing their SPC at minimums. If the student is 60-plus, then they might have close to 50 hours to get their license.”

The training is the same for all students, Leonard said. “Typically we are going to spend the first 5 to 10 hours just on air work (ground reference maneuvers, steep turns, slow flight, and stalls) because I really want the student to know how to feel the airplane. We often will cover up the airspeed indicator on practice landings because I believe acquiring the skill of ‘flying by the seat of your pants’ can be life and death in aviation. After that, we move on to landings, and usually whatever time it takes to master the air work is about what it’s going to be to master the landings. Once the student solos, we start planning their cross country and doing checkride prep.”

The frequency of lessons is, just like students earning a private ticket, a key factor in the total time it takes to pass a check ride. “The 65-year-old students that are only flying one hour a week are going to be way over the minimum hours required, while the motivated 25-year-old flying 3 to 4 hours a week has a good chance of getting it close to minimums,” Leonard said. “I would say the average is 25 to 40 hours depending how often they fly, what aircraft they fly, and how quickly they learn.”

Leonard added that the sport pilot written test can be one of the biggest inhibitors to people getting their SPC. “If a student doesn’t start their ground school until after they start flight training, they usually put it off because all they want to do is fly. If a student comes to us and they already have their written test done, usually we can get them through their SPC pretty quick. It all comes down to motivation and determination,” he said.

READ MORE: Across the USA in an LSA

For any CFI, a student’s first solo can be a moment of elation or trepidation, and sometimes both. “I can feel both joy and anxiety watching my student lift off on their first solo,” Leonard said, “because it is an incredible feeling! Seeing their face when they climb out of the airplane with their big smile is truly awesome! I love being able to be the first one to shake their hand and congratulate them on their solo. Being able to share a passion that I love so much, and seeing it become their passion after their solo, makes all the heart-thumping rough landings worth it!”

Leonard knows that these first solo flights can sometimes lead to great things, far beyond just enjoying the privileges of an SPC. “We have had a few students that went on to much more advanced ratings and certificates,” Leonard said. “One of our newest started training while he was in high school, and is currently at Bowling Green University in Ohio enrolled in the aviation program with plans to go on to commercial, CFII, and hopefully onto a charter operation. Another recent student is now enlisted in the U.S. Naval Academy and is hoping to fly fighter jets.”

As a man of faith, Leonard’s career as a sport CFI is closely related to his missionary work in South America.

“I never try to push my faith in Jesus on anyone, but when my students ask how or why I got into aviation, it brings up the conversation of my faith,” he said. “You get to know someone pretty well when you are in a small plane together for 20-plus hours.”

The post Inside the Career of a Sport Pilot CFI appeared first on FLYING Magazine.