Inside the Historic Mission to Refuel an Orbiting Satellite 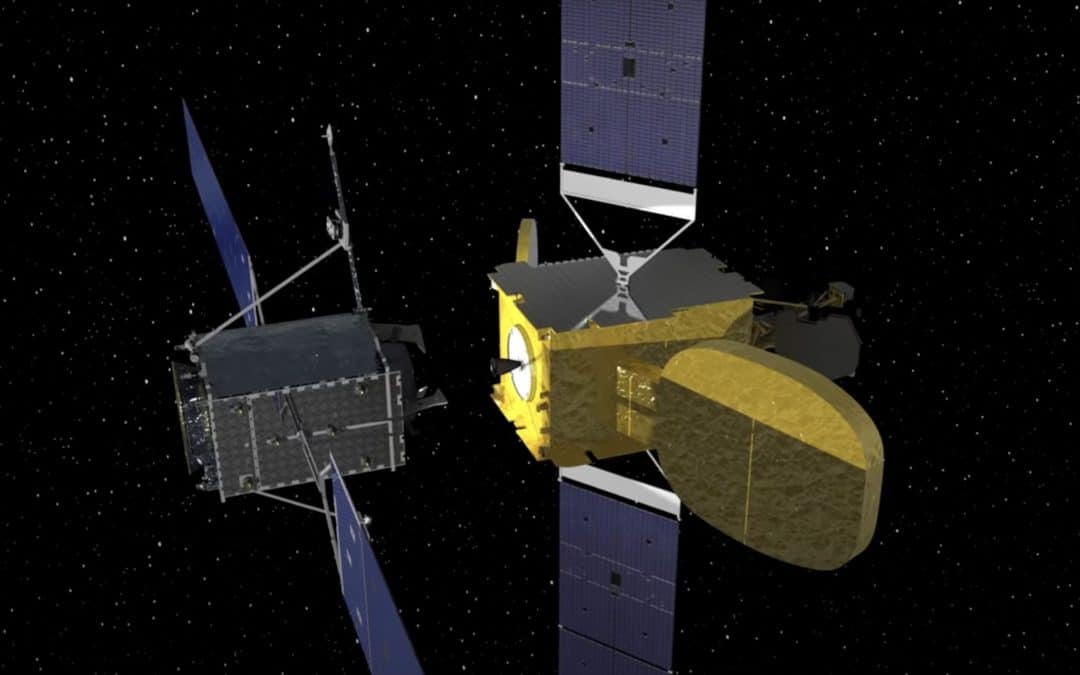 In a nondescript building outside Washington, D.C., a team of engineers, scientists, and technicians are making history with technological breakthroughs that have taken space satellite operations to the next level.

The spacecraft is called a Mission Extension Vehicle (MEV). On February 25, 2020, the minivan-sized MEV-1 captured and refueled an Intelsat (OTC: US INTEQ) communications satellite called IS-901 orbiting Earth in GEO— about 22,000 miles from Earth—essentially beginning a new operational era of commercial satellite servicing.

Satellite servicing has been a longstanding dream of the space community. It has enormous potential to save millions of dollars each year, protecting and maintaining the world’s orbiting infrastructure. Many of these satellites are communication relays that are critical to bouncing your phone and video signals anywhere around the globe.

Last year, SpaceLogistics replicated its historic achievement—docking with a communications satellite supporting 18 million customers on Earth and performing its mission without any disruptions.

“Lots of companies are talking about aspirations, we talk about accomplishments,” said SpaceLogistics president Rob Hauge.

After all, SpaceLogistic’s parent company leads the industry team for NASA’s James Webb Space Telescope—the largest and most powerful space telescope ever built.

Hauge and his colleagues showed us around the lab, explaining the groundbreaking work that’s been taking place here, where engineers have conducted more than a thousand MEV mock test flights, preparing for upcoming missions.

“It’s the same as certifying an aircraft,” said Quenten Duden, Spacelogistics business development and operations, civil and space. “It’s not just a design meets a design. It’s the characterization of the design so you can statistically prove it. For mission assurance, it’s a very important part of this—just like it’s an important part of aviation.”

Duden, a lifelong GA pilot, points out parallels here that many aviators would recognize. “To me that’s the magic of this effort,” he said.

Inside the Lab:  ‘Puppeteering’

Let’s go inside SpaceLogistics, for a moment: Dominating the lab are mockups of satellite and spacecraft components, including sensors, thrusters and other equipment. Under the mockups sits a high-precision flat surface that’s critical for docking tests. We see multiple computer stations, where MEV team members monitor and test complex docking software, sensor suites, capture technology, and other systems.

It is here where engineers “create the puppeteering” of the mockups, as Terence Hickey puts it. Hickey is manager of SpaceLogistics’ Rendezvous Proximity Operations and Docking (RPOD) Robotics Lab. “We feed what we need to do into those robots and move these mockups around based on the testing and scenarios we’re running through.”

“It’s all hard work,” Hauge says, “but when you’re talking about RPO and D, the D (docking) is the hard part. It’s a whole other level of complexity.”

Into Space: How the MEV Flies

In a nutshell, a typical MEV mission starts with the spacecraft itself. SpaceLogistics engineers program it per the requirements of the satellite it will refuel. Next, a rocket launches the MEV into space, where it uses a very efficient propulsion technology to boost it into GEO in the vicinity of the target satellite. In about three months, the MEV closes in on its target and flies autonomously to predetermined waypoints.

“The approach is a flight plan,” says Duden, who also serves as a mission architect at SpaceLogistics. “When you fly into an airport you’ve got noise corridors, you’ve got multiple ATCs, you’ve got handoffs. This is the same thing. It’s just managing flight in space.”

Hauge, a retired U.S. Air Force officer whose father flew KC-135 refueling tankers, compares piloting the MEV to the old flying discipline of “staying ahead of the airplane” when making control inputs.

“It’s pretty much the same type of thing we’re talking about here,” he says. “We’re not in any rush. We get everything all set, and we give the spacecraft the ability to autonomously go to its next waypoint. Once it gets there, it stops. And then we reassess everything. It’s all very well choreographed.”

The MEV controls its position near a target satellite with small Reaction and Control System (RCS) thrusters. The attitude of the spacecraft has to be adjusted for the sun, to prevent shadows from interfering with the MEV’s sensors. Operators also have to make sure the MEV doesn’t block the target satellite’s antennas or solar panels.

“There’s a correlation between instrument-rated flight and the ILS system and how we approach and dock a spacecraft,” says Duden, who’s been flying since he was a teenager, crop dusting farms in Southern Arizona. “It’s also a mix of bush flying: You were at the sandbar yesterday, it’s different today. How do you solve that in a nine-minute window?”

Satellite IS-901 as seen from SpaceLogistics’ MEV-1 during the 2020 mission. MEV-1 is seen here about 20 meters from IS-901 and approximately 22,000 miles above Earth. [Courtesy: Northrop Grumman]

If operators can’t solve a problem within the designated time frame, there’s another option which also has aviation parallels. MEVs can perform go-arounds—or what SpaceLogistics calls calibration approaches. As the MEV nears a target satellite, engineers on the ground are watching via visual cameras or other sensors. They may want to tweak the MEVs position.

“When you do that—to set yourself up again with the sun in the right place and everything oriented—it’s a three-, four- or five-day process,” says Gregg Herbert, chief engineer for the company’s satellite servicing operating unit. “You can’t just instantaneously get back to where you were and start over again.”

Since the beginning of the commercial satellite age in the 1960s, satellite operators have been faced with the inevitable reality that their “birds” will run out of fuel long before their payloads become nonfunctional. In fact, about 15 to 20 perfectly good satellites are intentionally retired and sent to a satellite “graveyard” orbit every year simply because they’ve run out of fuel, according to SpaceLogistics. The cost of each satellite puts the loss of potentially useful satellites in the millions each year.

These satellites are not only costly, but they can directly impact our daily lives. In addition to phone and video transmissions, GEO weather satellites warn the world about approaching hurricanes and other bad weather. Other satellites have critical national security functions.

Until now, purchasing a GEO satellite was a bit like being forced to buy a new car, knowing that you couldn’t refuel it or repair it or change it for 10 years. During NASA’s Space Shuttle era, astronauts were limited to servicing satellites in low Earth orbit (LEO).

NASA’s Space Shuttle fleet was enlisted five times to service the Hubble Space Telescope in low Earth orbit (LEO). But LEO is thousands of miles away from GEO, where the MEV can service satellites at a much lower cost. [Courtesy: NASA]

“Satellite servicing holds out the promise of turning that traditional model into how we currently own cars,” says space policy expert Brian Weeden, director of program planning at Secure World Foundation. “You can put gas in them. You can change the oil. You can repair them. You can put in an aftermarket stereo if you want. That’s where we’re headed.”

About 10 years ago, the dream of on-orbit satellite service inspired a breakthrough idea: SpaceLogistics realized that most GEO satellites come equipped with a liquid apogee engine.

Eventually, company engineers discovered they could design a semi-universal refueling system for satellites with these engine types. In theory, a MEV would rendezvous with its target satellite, extend a lance with a probe into the throat of the satellite’s thruster and deposit new fuel.

Bringing the idea to fruition came with numerous challenges. GEO satellites are racing through space at roughly 2 miles per second, as they maintain a constant position over specific locations on our rotating planet. Piloting these minivan-sized satellites and their solar panels with wingspans the length of airliners requires precise skills, allowing for very little margin of error.

Multiple breakthroughs were necessary for the MEV to make history in 2020. “Together with the software, the image processing, and to do it remotely and autonomously, and for the accuracy that we needed…that was the big challenge,” Herbert says.

But if you had to single out one key element, Hauge says you have to consider the MEV’s unique capturing mechanism, culminating with a small metallic, finger-like probe attached to the end of the MEV’s lance.

Before a satellite is captured, the spacecraft approaches, inserts its lance inside the engine’s cone, and then pushes the probe down the engine’s throat. The probe’s key components include spring-mounted fingers and sets of strategically placed wheels that let the probe smoothly roll into the cone with minimal contact.

“What we’re trying to do is make sure we don’t create any debris by damaging the spacecraft,” Hauge explains.

Colliding with space debris can be the death of any satellite. In fact, engineers are working on future satellite servicing spacecraft whose mission will include disposing some of the more than 30,000 pieces of dangerous space junk currently orbiting Earth.

Another important debris prevention strategy in the delicate dance between the MEV and the satellite is managing inertia.

“Our spacecraft weighs more than 5,100 pounds and yet what’s holding the two together is just enough force to do the job,” Hauge says.

A mockup inside the RPOD Robotics Lab bristles with sensors such as visible and infrared narrow field-of-view cameras to replicate SpaceLogistics’ MEV spacecraft. [Photo: FLYING/Stephen Yeates]

It’s critical to minimize friction between the probe and the nozzle, Duden says. “And you want to minimize the time that you’re actually pushing, because if you push too long, you’ll push the satellite away. You’ll run out of stroke on your lance and your probe, and you’ll be done.”

“We spent a lot of time on that—getting that friction down,” he says.

The MEV’s probe was developed over a couple of years, going through two prototypes before it was finished. It may be small, but it yields big results.

“That little device, that’s just the tip,” Hauge says. “We’ve put in a tremendous amount of effort for what is essentially universal docking. To get to that point—that was really the secret sauce for us.”

In conjunction with DARPA, the MRV’s tools will include a robotic arm developed by the U.S. Naval Research Laboratory. Its capabilities will expand on the MEV’s skill set to include detailed inspection, repair, and active removal of space debris.

A few years after that, perhaps sometime in the 2030s, SpaceLogistics plans to develop its Mission Assembly and Repair Vehicle (MARV) to manufacture and assemble spacecraft while in orbit.

By showing us the capabilities of the MEV, SpaceLogistics engineers and scientists inside this lab offered just a glimpse of what’s yet to come, in the never-ending quest to fully master the potential of space.

The post Inside the Historic Mission to Refuel an Orbiting Satellite appeared first on FLYING Magazine.