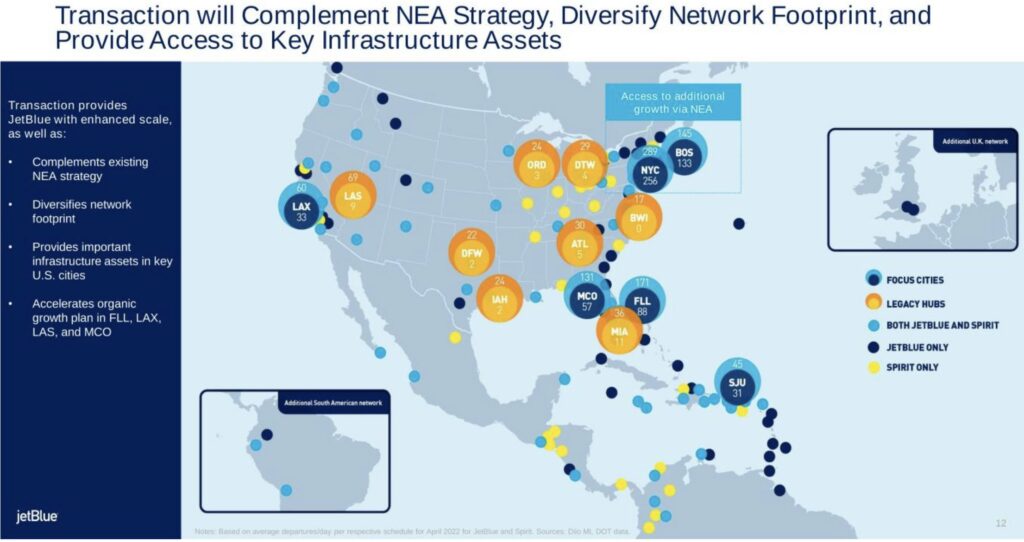 The airline said in a statement that its “superior proposal” of $33 per share to Spirit shareholders would represent a more than 50 percent appreciation on the Spirit share price at the time of the offer on April 4.

When Frontier and Spirit announced their merger in February, that proposal offered Spirit shareholders 1.9126 shares of Frontier plus $2.13 in cash for each Spirit share they own. In that case, Spirit shareholders’ shares would carry a $25.83 per Spirit share, and a premium of 19 percent over Spirit’s closing share price when that deal was announced.

In a statement, JetBlue CEO Robin Hayes called the potential combination a “gamechanger” and highlighted his airlines’ partnership with American Airlines through their ongoing Northeast Alliance (NEA) as an added benefit.

JetBlue credits NEA for helping scale the number of flights in the New York area from 200 to 300 daily. By combining with Spirit, JetBlue says Spirit’s operation would allow it to expand the impact of NEA nationwide.

Furthermore, JetBlue claims this tie-up with Spirit would allow them to compete against the “dominant ‘Big Four’ airlines.”

However, Spirit executives didn’t seem entirely happy about the generous offer, even calling it “unsolicited” in a statement to its shareholders. The airline is obligated to present the proposal for consideration to its shareholders, which could potentially upend the plans with Frontier altogether if shareholders prefer the richer deal.

To further complicate things, the Frontier-Spirit grouping promised no layoffs, but for its part, JetBlue said it would review business models to see what works.

“JetBlue is committed to working with labor leaders representing crewmembers and team members at both airlines to ensure the combination supports the needs of those that operate the airline, especially as Spirit team members join JetBlue,” the airline said. “In locations where JetBlue does not currently insource, it would plan to conduct a full review to evaluate Spirit’s staffing model and determine the optimal path forward for the combined company.”

Another cause for concern, which Hayes concedes, is the different business models both carriers use—Spirit being a low-cost carrier while JetBlue being a full-fare operator. JetBlue argues that they would be able to find synergy without raising prices on passengers.

“While JetBlue and Spirit are different in many ways, we also have much in common, including focusing on keeping our costs low so we can profitably expand,” Hayes said. “We would conduct a full review of Spirit’s product offering, operational and customer technology, and talent pool to optimize the combined airline,” Hayes said.

Both airlines operate aircraft in the Airbus A320 fleet family, though JetBlue also flies a series of Embraer E-190s set to be retired. Altogether, the combined airline would have 455 aircraft with 312 Airbus aircraft on order.