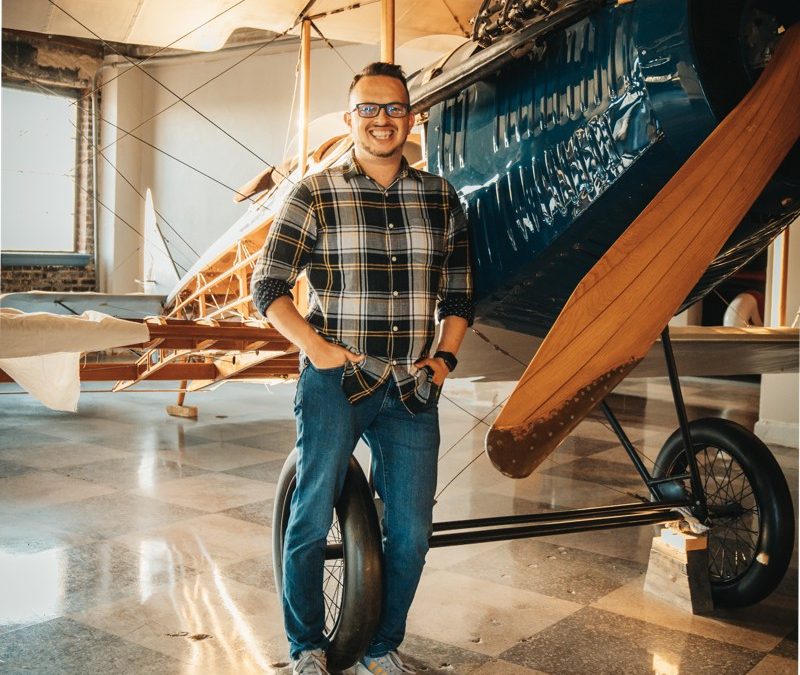 If walls could talk then the ones that hold up the former Wichita Municipal Airport terminal building would have plenty to say. They’ve certainly witnessed their fair share of stories over the years.

This key on-field landmark was completed in 1935 and was largely funded by New Deal and Works Progress Administration (WPA) allocations. During its heyday in the early 1940s, the airport was one of the busiest in the nation. In 1944, for example, an airplane was either taking off or landing there every minute and a half.

“It was the fourth busiest airport in the country, and one of only six places where you could get a layover for a transcontinental flight in the United States. There were almost 600 flights here a day.” said Ben Sauceda, executive director of the Kansas Aviation Museum.

Outside of the sheer number of flights accommodated by the terminal, the list of those who have walked its floors is equally impressive. The list includes Amelia Earhart, Howard Hughes, and Wiley Post.

One Chapter Ends, Another Begins

The building saw its last commercial airline passenger in 1954, when the airport was transitioned to military control after a new municipal airport was built across town. At this time, the United States Air Force and Kansas Air National Guard started using the building primarily for office space. After 30 years, though, it was determined that the site was no longer needed for administrative purposes and the building sat vacant awaiting its next chapter.

The terminal’s rebirth came thanks to the Wichita Aeronautical Historical Association, who sought a dedicated space to house its growing collection. This early group created what is now known as the Kansas Aviation Museum, which has called the former Wichita Municipal Airport terminal building home since 1991.

The preservationist group wasn’t ready to move in right away and spent several years cleaning up the site after choosing it as the place for their Sunflower State focused aviation museum.

Sauceda provides a brief glimpse into the hard work that has gone into getting the building back to its former glory.

“Sam Frey [a founding and current Board of Trustees Member of the museum] recreated the stencils needed to replicate that scheme on the rest of the ceiling.”

Along with thousands of artifacts and aircraft, the 48,000 sq. ft. building itself helps to tell an illustrious and compelling story that attracts the attention of visitors interested in aviation’s past.

“The halls of the museum are filled with stories of yesteryear,” Sauceda said. “The layout of the museum highlights the ingenuity of plane manufacturing, the entrepreneurship of aviation visionaries, and the intricacies of design and art of aircraft.

“Each level of the museum tells a different story of the many facets of aviation history.”

The historic airport isn’t the only reason that the town received the title of “The Air Capital of the World.” Aircraft manufacturers have also helped to craft the town’s identity. These businesses, totaling nearly three dozen at the peak before the Great Depression, were important to industry development.

Both the well-known and forgotten aircraft created by these manufacturers are showcased by the museum, as well as an impressive collection of other artifacts, original technical documents, and photographs. The heavy curatorial work undertaken by the museum ensures that local and statewide aviation history is not forgotten.

“Through the ongoing work of our volunteers, many planes of days gone by get to see another day of life as restoration of planes such as our 1930 Watkins Skylark and 1944 Beech Staggerwing. We also work to preserve some of the newer planes such as our Beech Starship and Beech 18.”

Many of the museum’s vintage, military, and business aircraft are housed within the three-story, art-deco terminal building. The site is on the National Register of Historic Places, and consequently is at the forefront of the group’s preservation activities.

The staff has found that by being based at this heritage site (in addition to utilizing other buildings and outdoor storage space), the group has been better able to weave Wichita’s and Kansas’ rich aviation history for visitors.

The view from the control tower, which dates to 1941. [Photo: Kansas Aviation Museum]

“We are getting ready to start some interior work on new exhibits, such as the Children’s Education Center,” Sauceda said. “Our overall goal with these efforts is to showcase as much of the design work of the structure as possible.

“False walls will be needed in some places, but we will still use the existing walls when able as backdrops for these additions.”

For those that are unable to see the museum in person, they can take an abbreviated self-guided tour here.

Which exhibits does Sauceda think you shouldn’t miss? He offers three:

The Vintage Aircraft Room, where six planes are currently showcasedThe Exterior Ramp Space, where more than a dozen airplanes are stagedThe Control Tower, which was completed in 1941 and was the first in the nation to have slanted windows

Visitors can also watch inbound traffic around the city, including at the adjacent McConnell Air Force Base. KC-135s and KC-46s are currently based there, and B-29s were once built in a building seen from the tower.