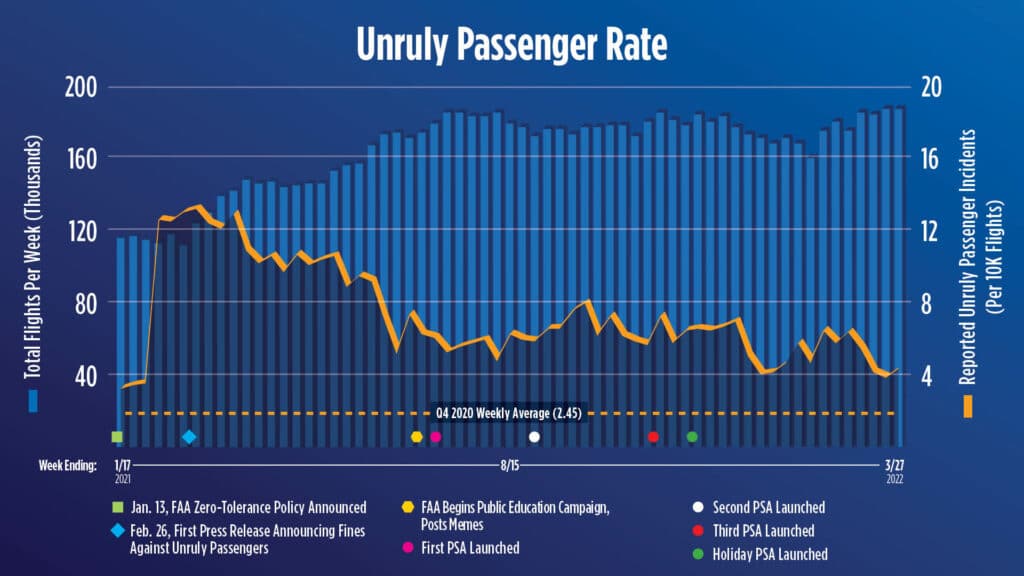 Lawmakers want to create a universal “no-fly” list for passengers who misbehave on commercial airline flights.

Each airline currently maintains its no-fly list that they forward to the FAA, which then proposes penalties. However, this leaves loopholes because unruly passengers could book a flight on another airline. Therefore, for an industry-wide no-fly list to work, lawmakers propose that the FAA provide a list of unruly passengers to the TSA. They would be in charge of overseeing the entire program and other means and terms of enforcement.

How It Would Work

TSA would notify banned fliers about their status and provide guidelines and opportunities for appeal. In the conference, Reed said the bill would serve as a deterrent, ideally, and called on the FAA, TSA, and Department of Justice to reduce these incidents significantly.

“We must put a stop to violence on aircraft,” Reed said, in defense of cabin crew, whom he called “the very definition of frontline workers.”

How The FAA Deals With Unruly Passengers

Coincidentally, the FAA announced last week that it had proposed as much as $2 million in fines against unruly passengers since the beginning of the year. That includes the biggest penalties to date, $81,950 and $77,272; both stemming from incidents in July last year.

The agency said the fine of $81,950 came from an incident on an American Airlines (NASDAQ: AAL) flight on July 7 in which a passenger tried to open a cabin door and assaulted flight attendants.

As for the fine of $77,272, one passenger on a Delta Air Lines (NYSE: DAL) flight allegedly also tried to exit the plane midflight and bit another passenger multiple times.

U.S. Transportation Secretary Pete Buttigieg first gave notice that these fines were coming on The View, where he said, “If you are on an airplane—-don’t be a jerk,” ahead of the FAA’s announcement.

As for the fines, it took the FAA until August to propose $1 million in fines in 2021. Meanwhile, it only took four months into 2022 to double that amount.

“When flights are diverted and have to land somewhere outside the flight path, that throws things off—enough is enough,” Swalwell said. “If you commit violence in the sky, it may be your last flight.”

He also expects that as mask mandates in airports and flights are relaxed, fewer incidences should follow.

In February, Delta Air Lines CEO Ed Bastian called for implementing a national no-fly list and essentially laid out the playbook that the new bill suggests.

“I have proposed that any person convicted of a crime because of an onboard disruption be added to a national, comprehensive “no-fly” list of unruly passengers,” Bastian said. “While each airline can take the initiative and do its part, only a comprehensive list overseen by the federal government can close the loopholes and prevent disruptors from flying.”

Various airlines and crew member unions have thrown their support behind the bill. After the announcement, the Air Line Pilots Association (ALPA), the largest pilot union in the world, thanked the senators and said this would increase safety and security.