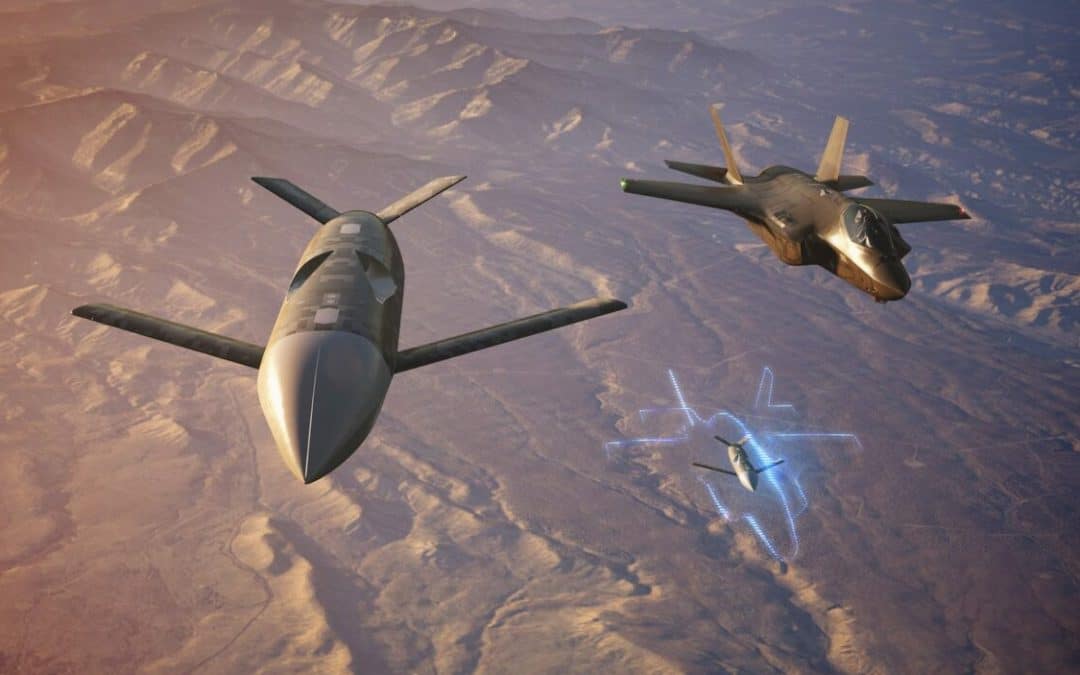 In the not-too-distant future, fighter pilots will likely be juggling a network of autonomous drones in addition to their own flight decks. In this combat scenario, drones fly ahead into harm’s way and, through the power of artificial intelligence, relay information back to their operators.

It’s a concept that Lockheed Martin (NYSE: LMT) says it is investing $100 million of its own money into to develop. The initiative, called “Project Carrera,” is set to explore human-machine pairing technology through demonstrations of its F-35 fighters teamed with unmanned Speed Racer drones equipped with capabilities such as sensing or electronic warfare. Speed Racer is a missile-shaped unmanned aircraft under development at Lockheed.

The initiative emerges as military leadership champions the concept of pairing unmanned air combat platforms with piloted aircraft as a cost-effective way to build mass for the services.

“With distributed teaming, pilots can extend the reach of networked sensors, increase the survivability of piloted platforms, and enable data collection, fusion and distribution that informs their decisions and achieves tactical execution,” Lockheed said.

“This is not going to be a one-off stunt,” John Clark, vice president and general manager of  Lockheed’s Advanced Development Programs –  also known as Skunk Works – told reporters this week, according to Breaking Defense. “What we’re really focusing on is a systematic build up where we can evaluate that human and uncrewed system interaction, and understand how those behaviors build up over time.”

Lockheed’s $100 million investment includes $20 million earmarked for F-35 upgrades, $42 million for “teaming enabling” technology and $38 million for “battlespace multipliers,” such as satellites, according to the news outlet. The results from the project will then be used by Lockheed when it makes a competitive bid for the Air Force’s Collaborative Combat Aircraft, which is expected to occur in fiscal 2024.

Early phases of Project Carrera will focus on defining unmanned aircraft core behaviors, while later phases will focus on how autonomous drones can collaborate with piloted aircraft to execute a “kill chain,” or structure of attack, in a mission, The Drive reported. The project will also explore air launching drones, such as the Air Force’s experimental Rapid Dragon program that is experimenting with airdropping palletized weapon systems out of cargo aircraft.

Air Force officials are in early discussions about purchasing the drone, previously known as Loyal Wingman, which Kendall said could be a “risk reduction mechanism” for the NGAD platform. The 38-foot-long MQ-28 unmanned combat air vehicle with a 2,000 nm range has been in development for the Royal Australian Air Force since 2019 and is considered a foundation of Boeing’s Airpower Teaming System.

Last week, during the Defense News Conference, Kendall said the MQ-28 could potentially provide an operational experiment for the Air Force. “One of the things we need to do as we’re developing the uncrewed combat aircraft mission equipment capability and finalizing the requirements is to start to learn how an aircraft like that would fit into an operational unit,” he said.

“The expectation is that these aircraft can be designed to be less survivable and less capable, but still bring an awful lot to the fight in a mixture that the enemy has a very hard time sorting out and dealing with, and that you can even intentionally sacrifice some of them to draw fire, if you will, to make the enemy expose himself,” Kendall said. “But keeping costs under control is part of the equation, and not having a human being at risk is another part of that.”