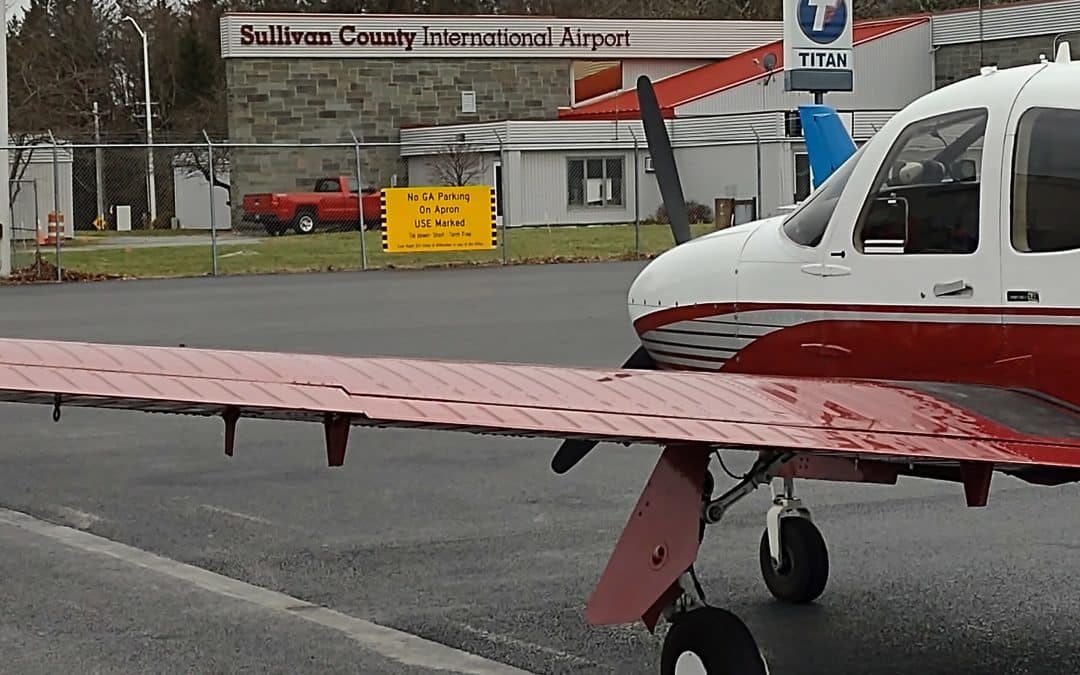 There are exceptions, though, like Sullivan County International Airport (KMSV). Perched on a hilltop, dominating the rural landscape, the complex is easy to spot from 10 miles away—or more. It’s so big that you might expect to call in to ATC as you approach, but the field is non-towered.

For pilots accustomed to smaller airports, Sullivan’s 6,300-foot runway, which is 150 feet wide with grooved pavement, can seem like an embarrassment of riches. It would be difficult (though far from impossible) for the average 172 driver to overshoot such an enormous strip. Indeed, when I was training for my private, my instructor never took me there because, he said, there was no challenge to it.

After getting my certificate I began flying there regularly while hopscotching the region to collect hours and practice takeoffs and landings. I often wondered how many consecutive touch-and-gos I could perform on that long runway but never tested the concept.

Years later, when working toward endorsements for complex and high-performance aircraft, we made several visits to KMSV because the setting gives pilots extra space, physically and psychologically, to focus on handling, speed control, and other tasks besides simply getting on the ground safely. This is why the airport is also a popular destination among pilots pursuing instrument ratings or practicing approaches to stay current. There’s a little more breathing room.

READ MORE: Why Haven’t You Flown to Ellenville Yet?

Tranquility might also be an attraction for advanced students. The radio is usually quiet, and you often have the pattern to yourself. I have rarely encountered other traffic at Sullivan, even though the place was designed to handle swarms of private aircraft and regional airline operations.

Located in Bethel, about 90 miles northwest of New York City, the airport opened in 1969, which was, by coincidence, just in time for the original Woodstock music festival. Longtime residents still talk about helicopters shuttling performers from the airport to the venue just a few miles away. While classic images of Woodstock focus on concert goers parking their Volkswagen vans on the side of the road and hiking to Max Yasgur’s farm, lots of folks also arrived in private aircraft.

The long-term plan behind the airport’s development was aimed at breathing new life into the vacation resort industry that dominated the Catskills region for decades through the middle of the 20th century. By the 1960s, operators of hundreds of Catskills resorts could feel a downward trend in the industry. Growing popularity of new destinations like the Carribean islands, made accessible by mainstream air travel, drove a significant shift in the market.

County and state officials worked with operators of the biggest resorts to push the airport plan, figuring the general aviation boom would bring in more travelers. Small airlines began using the airport as well. The former regional carrier Mohawk Airlines flew routes between KMSV and numerous destinations including Montreal and Toronto, which put International in the airport’s name.

But the airport never really hummed with activity the way its developers envisioned. Gradually the old resorts yielded under the weight of changing preferences, and the airport grew quiet.

Today there are still lots of things to do in the Catskills, like hiking, shopping, dining and going to shows. Like many upstate towns, Bethel and nearby Monticello saw an influx of former city dwellers during the pandemic. Air traffic still swells considerably during the summer, an employee told me. Interestingly, one of the biggest draws, he said, is Bethel Woods, an arts and entertainment center built on the former Woodstock site.