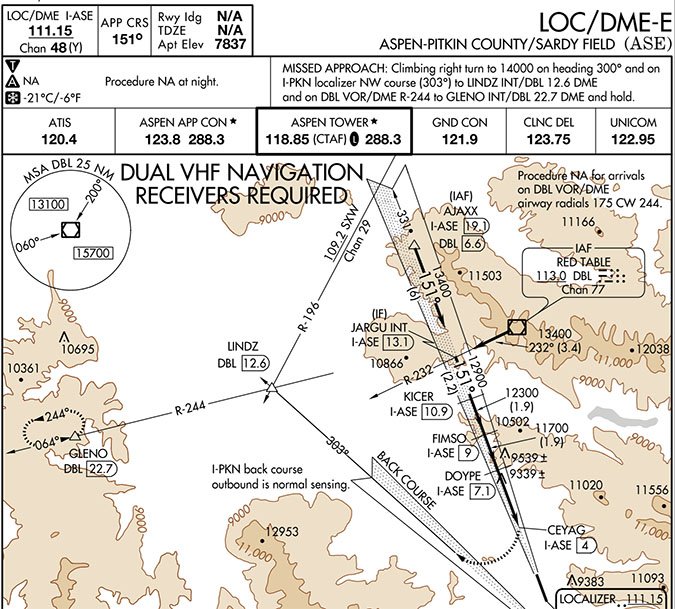 Every instrument approach procedure we fly ends in one of two ways: We either see the runway environment and land, perhaps after circling to align ourselves with a runway, or we don’t. When we don’t, we fly a missed approach procedure designed to get the aircraft back to a safe altitude and position from which the next steps can be taken. Those next steps can include trying the same approach again, shooting a different one or diverting to a different airport. It’s not that hard.

And missed approaches themselves shouldn’t be that difficult: Set climb power and either fly straight ahead or turn one way or the other toward a nearby fix once reaching a specified altitude. The exact missed approach we’re to fly is displayed on the plate itself or is as directed by ATC in our approach clearance. Regardless, each miss requires adding power, climbing, probably turning and maybe holding. Yet pilots can’t seem to stop having accidents while flying a miss. So we took a look at some recent NTSB accident reports to learn more about how pilots are missing the miss. They seem to break down into two main categories, and we’ve supplied an example of each.

One of instrument flying’s most persistent accident causes is spatial disorientation. The FAA defines spatial orientation as “our natural ability to maintain our body orientation and/or posture in relation to the surrounding environment (physical space) at rest and during motion.”

On January 18, 2011, a Cessna 172 pilot decided to practice instrument approaches in IMC. After a successful VOR procedure, the pilot conducted a low approach to the runway and was then cleared direct to the VOR, to hold northeast at 3000 feet MSL and to advise when he was ready to begin a second procedure, an ILS approach. The pilot told the controller he had gotten himself “a little out of whack” and that he was “just trying to straighten it out.”

Radar data revealed the airplane had begun to turn right and continued turning right for about 150 degrees before radar contact was lost. The airplane then struck a tree, a travel trailer and a pickup truck, killing the pilot, someone on the ground and injuring a third person. The NTSB’s probable cause statement: “The pilot’s loss of airplane control during a missed approach due to spatial disorientation.”

How To Prevent Spatial Disorientation

To learn how more about spatial disorientation and help prevent it from causing an accident, the FAA recommends:

• Take the opportunity to experience spatial disorientation illusions in a Barany chair, a Vertigon, a GYRO or a Virtual Reality Spatial Disorientation Demonstrator.
• Before flying with less than three miles’ visibility, obtain training and maintain proficiency in airplane control by reference to instruments.
• When flying at night or in reduced visibility, use the flight instruments.
• If intending to fly at night, maintain night-flight currency. Include cross-country and local operations at different airports.
• If VFR-only, do not attempt visual flight when there is a possibility of getting trapped in deteriorating weather.
• If you experience a vestibular illusion during flight, trust your instruments and disregard your sensory perceptions.

On October 13, 2014, the pilot of a Piper PA-46-310P Malibu was returning to his home airport. Weather included a 200-foot overcast and five miles of visibility in light rain and mist. Witnesses reported hearing and seeing the airplane break out of the clouds, fly over the runway at about 100 feet AGL, then disappear back into the clouds. Shortly after the airplane was seen over the airport, it struck a line of 80-foot-tall trees about 3600 feet north-northwest of the airport and subsequently impacted the ground and a large tree near a residence.

According to the NTSB, “Although it is possible that the pilot may have experienced spatial disorientation, there was insufficient evidence to conclude that spatial disorientation contributed to the accident.” The rather unhelpful probable cause finding: “The pilot’s loss of airplane control while attempting to fly a missed approach procedure in instrument meteorological conditions.”

This accident actually strikes us as more of a controlled-flight-into-terrain (CFIT) situation: Witnesses heard the engine at a high power setting, but the pilot apparently never initiated a sustained climb and flew beyond the airport into trees. In our view, the pilot never transitioned to flying the miss.

How do we fix these two ways to screw up a missed approach? Some ideas from the FAA on how to prevent spatial disorientation are in the sidebar above. Mainly, however, our view is that becoming and remaining proficient when flying instruments is key.

There is a wide range of stimuli pilots experience, especially when maneuvering in IMC during an approach. It’s always tantalizing for us to begin transitioning away from the instruments if and when we break out, when we really should be doing nothing. But we often can overdo it and transition away from the instruments before we’re really finished with them, or the approach.

The loss-of-control/CFIT type of missed-approach accident strikes us a completely different problem, involving a basic airmanship failure. Perhaps it involves trimming for the approach and not the miss, failure to set climb power or a reluctance to climb away from the runway we wanted to land on—or some combination—but many pilots seem to motor off along something resembling the missed approach procedure without really climbing as they should. The results are predictable and repeatable.

Instrument flying isn’t natural for humans, which is why we can’t do it without training. Next time you’re out shooting practice approaches—and we all need the practice—pay attention to how you fly the miss.

This article originally appeared in the April 2017 issue of Aviation Safety magazine.

The post Missing The Miss appeared first on AVweb.