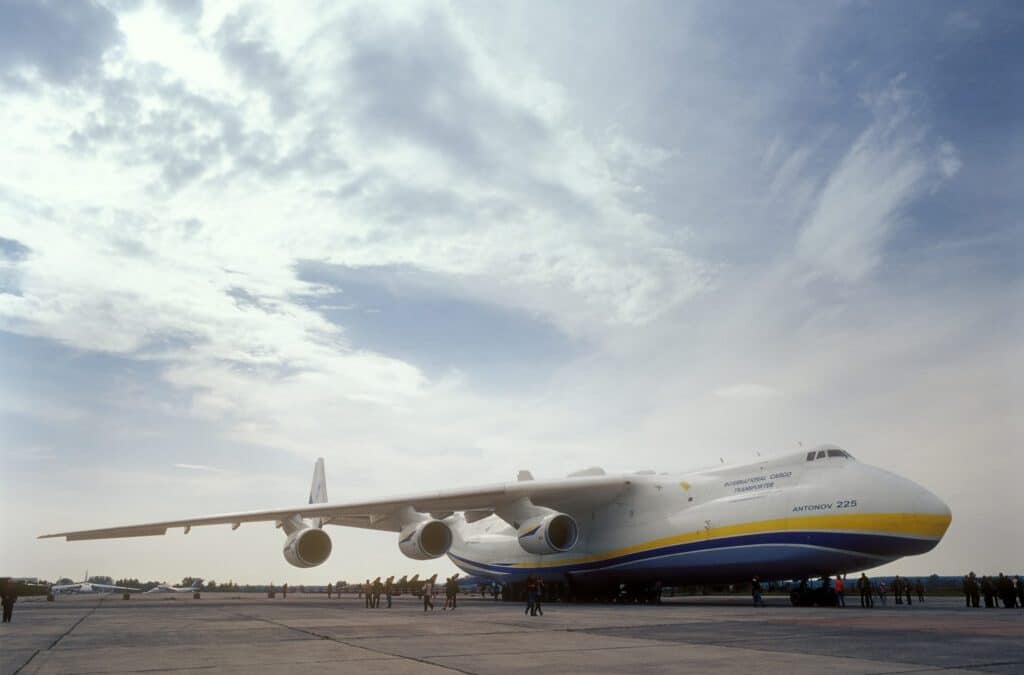 The Antonov An-225 Mriya, the world’s largest cargo airplane and relic of the Soviet space program, has died. It was 33 years old. Does that sound like the first line of an obituary? Well, if any aircraft deserves to be mourned, the An-225 certainly qualifies.

In the weeks since the iconic airplane was destroyed at Gostomel Airport (UKKM) during Russia’s invasion of Ukraine, admirers from around the world have expressed shock and sadness. Painful images on social media show Mriya’s mangled wreckage painted with Ukrainian yellow and blue stripes.

Now, a campaign to revive the majestic, four-story-tall, twin-tailed transport, offers a tiny shred of hope that the dream may return.

‘I Still Can’t Believe She is Gone’

The painful worldwide reaction to the death of Mriya—Ukrainian for “dream”—is perhaps most palpable on social media, where admirers have shared their thoughts. Facebook’s Antonov An-225 Mriya fan page—just one of many such pages—boasts more than 90,000 members.

“So very heartbreaking,” posted Petra Eva. “I want to block these images out of my mind and envision her as being in safety somewhere. Unfortunately, now after seeing these images, the reality is completely different… I still can’t believe she, Mriya, is gone, destroyed.”

Another admirer, Paul Rowbotham, wrote, “I was lucky to catch the An-225 three times. Once at Prestwick and twice at my local airport Manchester.”

Jakob Varming wished his fellow fans goodbye. “It is time to leave this group as there is no Dream anymore and it will not rise as a Phoenix for sure.”

Why Mourn an Airplane?

For some, it may feel inappropriate to mourn an airplane amid so much human death and misery. The loss of Mriya pales in comparison to the war’s human toll and its millions of desperate Ukrainian refugees. A plane can be rebuilt. But the thousands of people who’ve died in the fighting are gone forever, and without question that fact is infinitely more tragic.

What is worth mourning is the loss of a powerful symbol for Ukraine and the global aviation community at large. Mriya  represented a truly historic technological achievement: an airplane larger than any other commercial or military jet that could fly up to 250 tons at least 4,000 km (2,485 sm) in about five hours.

A Unique Set of Attributes

Mriya was born during the Cold War at the Antonov Design Bureau facilities in Soviet Ukraine, rolling out for the first time in November 1988 with a unique set of attributes: a 290-foot wingspan, twin vertical stabilizers, and robust landing gear with dozens of wheels.

Just like any accomplished person, Mriya and its crews took those attributes and built a resume for the history books:

At the dawn of the 21st century Mriya was blessed with a second act, as a commercial heavy transport. [Shutterstock]

By the 2010s, Mriya had inspired numerous online tributes, including countless Facebook pages and Instagram accounts. At nearly every destination, Mriya drew onlookers. Sometimes, the crowds were huge: In 2016, more than 15,000 people reportedly showed up to watch it land at Australia’s Perth Airport (YPPH).

Some came to simply gawk at the freakishly big airplane. Others came to marvel at the sight of something so heavy taking flight. They were fascinated with Mriya’s six wing-mounted turbofans. They were enraptured by its trademark Antonov high-wing design.

In a world full of factory-produced airliners that look virtually the same, the An-225 was one of a kind.

In fact, Mriya was the first Soviet aircraft to feature “power-by-wire controls with no mechanical linkages between the throttle levers and the engines,” according to Yefim Gordon and Dmitriy Komissarov in their 2020 book “Antonov’s Heavy Transports.”

Later, Antonov was put in charge of his own facility and relocated to Ukraine. There, he developed several important Soviet aircraft, including the world’s largest turboprop—the An-22— as well as the An-124 Ruslan heavy transport.

Although he died shortly before Mriya’s first flight, Antonov’s Ukrainian-based company was held up by Moscow for generations as a shining example of industrial prowess.

The Story Behind the Number 225

According to Gordon and Komissarov, the An-225 received its numeric designation in the 1980s from Soviet aerospace engineers, who envisioned a reusable space transport system that would enable horizontal, suborbital launches instead of traditional, vertical lift-offs from the ground. Mriya was initially conceptualized as an in-flight launch platform for the Soviet space shuttle. To accomplish that, engineers estimated the jet’s maximum payload capacity would have to be 225 tons to carry a spacecraft and its external fuel tank—hence the An-225.

Mriya’s maximum payload ended up being even higher: 250 tons. Although it never launched a space shuttle in flight, An-225 did serve as a transport, carrying the 60-ton spacecraft piggyback to the Paris Air Show in 1989.

The Forgotten An-225 Twin

By the early 1990s, Mriya’s success prompted plans to build three additional An-225s. Shortly after work began on a second aircraft, the Soviet Union collapsed, leaving the twin An-255 unfinished and largely forgotten. Kyiv took ownership of the Antonov Design Bureau when Ukraine declared independence in 1991.

At the dawn of the 21st century Mriya was blessed with a second act, as a commercial air transport for some of the heaviest equipment in the world, including steam generators and power transformers.

In 2018, the second An-225 airframe was reportedly sitting in a hangar on the outskirts of Kyiv “somewhere between the city’s Nyvky and Sviatoshyn metro stations,” according to CNN.

Photos showed the plane disassembled inside a huge facility, including its fuselage, wings, nose gear, and tail. Completing the plane would cost between $250 million and $350 million, Antonov’s An-225 director Gennadiy Silchenko told CNN at the time. Earlier this month, Ukrainian state defense organization Ukroboronprom estimated that rebuilding the An-225 would cost about $3 billion.

In fact, Mriya’s manufacturer has already set up a fund to “revive” the jet. The Antonov Company is soliciting donations.

Prospects for a Mriya II seem uncertain now, given the continued fighting in the region. But maybe. Someday.