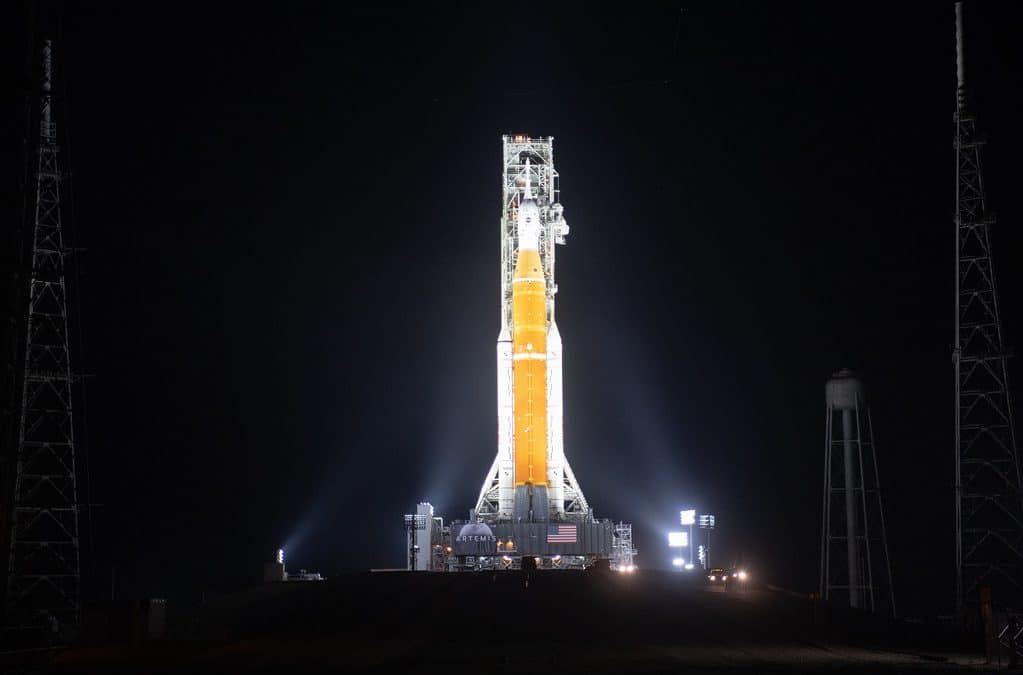 KENNEDY SPACE CENTER, Florida (FLYING) — The world’s most powerful rocket has made its way to the launchpad—with its sights set on the moon.

NASA’s Artemis I rocket, including its Space Launch System (SLS), was unveiled to the public Thursday, sitting atop the agency’s massive crawler transporter. Hundreds of space enthusiasts lined up near the Vehicle Assembly Building (VAB) at Kennedy Space Center to watch history slowly stroll down to Launch Complex 39B.

Capt. Victor Glover, an Artemis astronaut, spoke with FLYING about the Orion spacecraft, which could take him to the moon.

“It’s got four seats, it’s got these three screens, lots of buttons, and some joysticks—it looks like the cockpit of a fighter aircraft or a really expensive gaming console, if you’re one of those really serious gamers,” he said. “Honestly, to the casual observer, it looks like an Apollo spacecraft.”

With his prior experience on the International Space Station, there’s a good chance that Glover could be selected as the first person of color to set foot on the lunar surface. FLYING asked the former naval pilot about what that meant to him.

“I actually try hard not to think about that,” he said. “Don’t get me wrong, it’s a dream of mine to walk and work on the surface of the moon, but as soon as I go further than that, and I start thinking about the details of that, you can start to build up these expectations.

“Right now, what I’m focused on is my job, working on the hardware to develop the Human Landing System, to support events like this, and then, to make sure that I’m healthy and technically ready, in case my boss does want to assign me to one of those missions…if that day does come, it would be truly amazing.”

NASA’s SLS rocket with the Orion spacecraft aboard is seen atop a mobile launcher as it rolls out of High Bay 3 of the Vehicle Assembly Building for the first time to Launch Complex 39B. [Photo: Jeremy Kariuki]

Deputy general manager for Jacobs Space Operations, Bradley McCain, also spoke with FLYING about how it feels to be a part of such a historic mission.

“It’s very exciting. For me personally, I was 7 years old when man landed on the moon,” he said. “I grew up across the river here from Kennedy Space Center…Events like these matter, not only to me and the people who worked on the program, but to the folks that are watching from TV that can’t come out here today to watch these things. You don’t know who you stimulate to go into these STEM sciences.”

Jacobs is responsible for several upgrades to the crawler transporter, which stands 580 feet tall and weighs over 6 million pounds without a payload.

The rollout to the launch complex is a very tedious process, where the crawler can only move about one mile per hour, in order to minimize vibrations that could damage the rocket. The journey from the VAB to Launch Complex 39B took several hours for the SLS, and every inch toward its destination is just as nerve-wracking as the last.

“The crawler has been tested many times,” McCain said. “You’re nervous, only in that, it’s the first time. We’re confident that it can do its job.”

Currently, there is no exact date for the Artemis I launch, but you can be sure to find all the latest updates here and on Twitter @FLYINGMagazine.