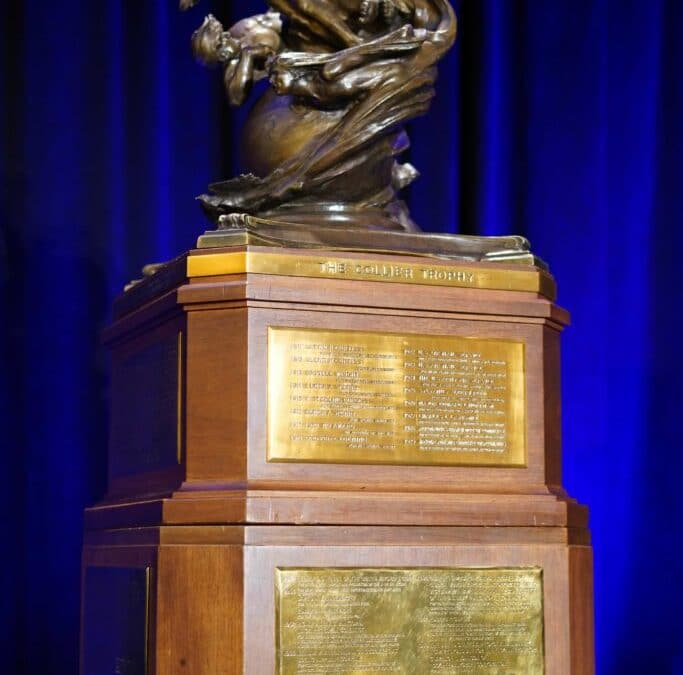 NASA’s Jet Propulsion Laboratory Ingenuity Mars Helicopter Team has been awarded the Robert J. Collier Trophy for “… the first powered, controlled flight of an aircraft on another planet, thereby opening the skies of Mars and other worlds for future scientific discovery and exploration.”

The Ingenuity helicopter made history on April 19, 2021, when it deployed from the rover Perseverance and hovered above Mars surface for 30 seconds, “becoming the first aircraft in history to make a powered-controlled flight on another planet.”

In a statement announcing the award Tuesday, the National Aeronautic Association (NAA) stated: “One hundred and seventeen years after the Wright brothers succeeded in making the first powered flight on our planet, the Ingenuity Mars Helicopter performed this amazing feat on another world.”

“While NASA’s Ingenuity Mars Helicopter team expanded the flight envelope by 100-million miles, we know we didn’t do it alone,” said Larry James, interim director of NASA’s Jet Propulsion Laboratory in Southern California. “For it was the efforts and ingenuity of those women and men who developed and tested cutting-edge vehicles before us that helped make powered-controlled flight on another planet possible. That our Mars Helicopter name will now appear on this iconic trophy alongside so many of these air and space giants is an honor, and fuels us to continue exploring the skies over the Red Planet.”

On Tuesday, NAA Chairman Jim Albaugh celebrated the achievement, saying in a statement, “The challenges of autonomously flying a helicopter in the atmosphere of Mars cannot be overstated. This accomplishment truly warrants and has earned this year’s Collier Trophy.”

Since 1911, the Collier Trophy has been awarded annually for “… the greatest achievement in aeronautics or astronautics in America, with respect to improving the performance, efficiency, and safety of air or space vehicles, the value of which has been thoroughly demonstrated by actual use during the preceding year,” according to the NAA.

The list of Collier recipients represents a timeline of air and space achievements, marking major milestones in the history of flight.

Other finalists this year included:

The 525-pound bronze trophy is on permanent display at the Smithsonian’s National Air and Space Museum in Washington, D.C. It will be formally presented to the Mars team on June 9 in D.C.