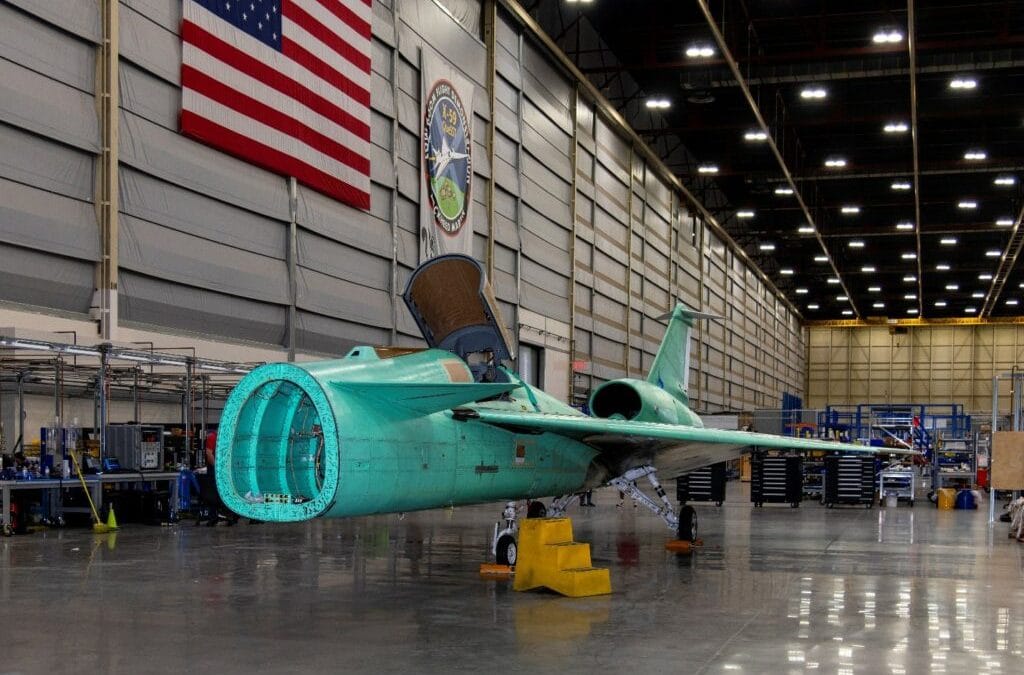 Earlier this week, NASA announced that the X-59 had arrived back at the Skunk Works facility after months of critical ground tests at Lockheed Martin’s facility in Fort Worth, Texas.

California dreamin’… of flight at the speed of sound without a loud sonic boom!

The X-59 is back at @LockheedMartin’s Skunk Works, where final assembly, engine install & system checkouts will take place! Stay updated as we move closer to first flight: https://t.co/SImKhyvdcL pic.twitter.com/04YQutH7PZ

“California dreamin’…of flight at the speed of sound without a loud sonic boom!” NASA said Wednesday on social media. “The X-59 is back at @LockheedMartin’s Skunk Works, where final assembly, engine install & system checkouts will take place!”

Late last year, NASA announced the X-59 airframe had been removed from the jig system that provided external scaffolding support and that the aircraft was being readied for next steps, which included a first “power on” of the aircraft’s internal systems.

The aircraft, which has been under construction since 2018, was then trucked to Lockheed Martin’s facility in Texas for structural tests. There, it underwent ground testing to ensure it could hold up to flight loads and stresses, as well as going through fuel system calibration and testing.

“With its return to California, the X-59 will undergo further ground tests as it approaches full completion of its development and continues to make progress on its way to first flight,” NASA said Monday.

Demonstration flights are slated to begin in 2024, according to NASA.

In addition to collecting data, the X-59 flights will also be gauging the public’s reaction to supersonic “thumps.”

The aircraft’s distinctive nose, which comprises nearly a third of the aircraft’s total length, is designed to shape shock waves during flight and reduces loud sonic booms as it flies at supersonic speeds of about 660 mph (574 knots) at sea level.

“The X-59 is designed to fly faster than the speed of sound without producing the typically loud sonic booms that occur when an aircraft flies at supersonic speeds,” NASA said. “The advanced X-plane will instead reduce that sound to a quiet sonic ‘thump,’ which will be demonstrated in flights over communities around the U.S. starting in 2024.”