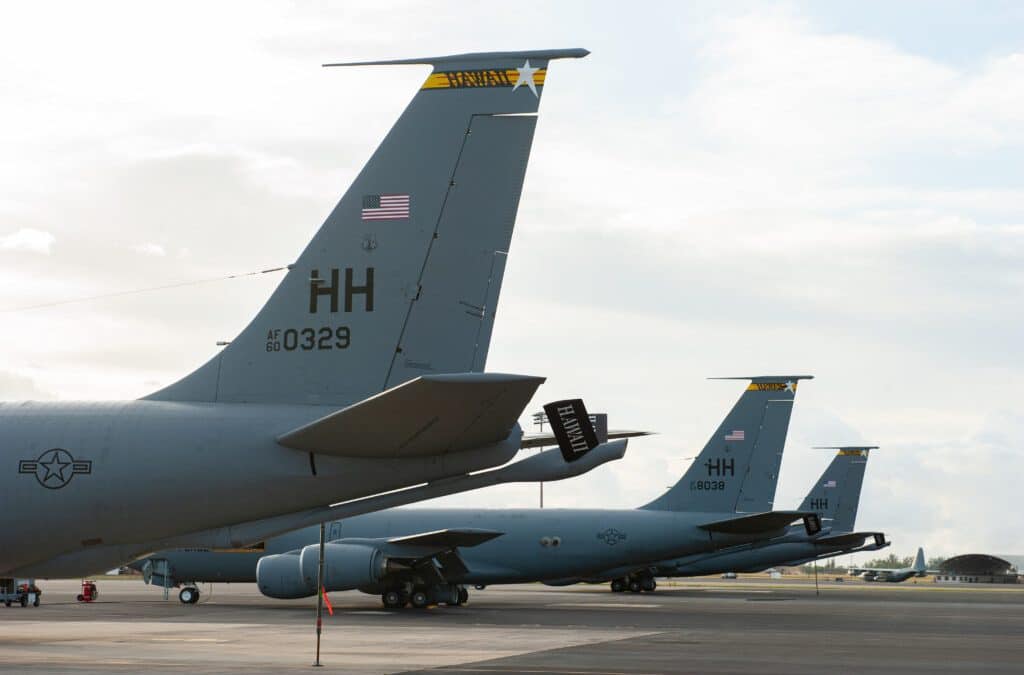 The National Museum of the U.S. Air Force (NMUSAF) will soon add to its collection a KC-135R Stratotanker that is not only an example of one of the service’s most iconic aircraft, but also the first aircraft to conduct tri-level fueling.

The Air Force is retiring the aerial refueler with serial number 60-0329 after decades of service, and it is slated to be delivered to the Wright-Patterson Air Force Base, Ohio, museum on Saturday, April 30.

The aircraft, which performed the unprecedented triple aerial refueling operation in the Gulf of Tonkin in May 1967, is a significant addition to the museum, according to officials.

The refueling feat occurred when the KC-135’s crew received an emergency request that Navy aircraft were in immediate need of refueling.

“A downed U.S. Navy pilot needed to be rescued in Southeast Asia,” William McLaughlin, reference curator at the museum, told FLYING in an email. “Two Navy F-8 fighters provided cover for the pilot. For several hours, two Navy A-3 tankers kept the F-8s fueled and flying, but the group was dangerously low on fuel. The KC-135 was in the area of operations when its crew responded and refueled the tankers while they simultaneously refueled the fighters,” he said.

“This was tremendous because the KC-135 happened to be in drogue and probe configuration so that it could fuel two F-104s as its original mission,” McLaughlin said.

“The downed Navy pilot was surrounded by AAA [anti-aircraft artillery] and the Navy F-8s were doing their best to save their guy,” he added. “A valve goes down on one of the F-8s that keeps him from being able to use the fuel he has onboard. The operation itself is highly tenuous. From a pilot perspective, the KC-135 crew must keep their plane steady because it’s refueling the A-3s who are also having to fly a steady course because they have an F-8 getting gas.”

Not only was the operation the the first time that tri-level fueling had ever been conducted, it was done in a combat zone, McLaughlin said.

The KC-135 aircrew would go on to be awarded the 1967 Mackay Trophy for most meritorious flight of the year.

“An Air Force KC-135 crew is surrounded by Navy planes that are barely in the air over another downed pilot,” McLaughlin said. “Our KC-135 crew takes their plane into hostile airspace to save lives and they do. This was the first time that a refueling crew was ever awarded the Mackay Trophy, and they deserve the recognition.”

Adding the aircraft to the museum’s collection puts a spotlight on the big picture story of the aircraft, along with its flight crew.

“This is why we say that we are the keepers of their stories,” McLaughlin said. “We try to have aircraft that demonstrate the advancements in airpower, but also keep the people in the forefront of the conversation. I think 60-0329 fits that goal perfectly.”

A look at the serial number of the iconic aircraft (60-0329). [Courtesy: Department of Defense]

The Stratotanker was fielded in the late 1950s in order to extend the reach of Strategic Air Command during the Cold War. When it entered service in 1957, the KC-135 became a modernization milestone when it replaced propeller driven tankers of the post-war period. It’s an aircraft that the Air Force continues to fly today.

“The success of the KC-135 is demonstrated in its lifecycle,” McLaughlin said.

The Air Force initially purchased 732 KC-135s, the last of which was delivered in 1965. The service currently has an inventory of 396 aircraft: 153 in active duty, 171 in Air National Guard and 72 in Air Force Reserve.

“The KC-135 Stratotanker’s in-flight refueling capability is the foundation on which many other Air Force operations are built,” McLaughlin said. “Not only is the KC-135 an iconic plane, but its telescoping boom system and other upgrades revolutionized aerial refueling. In-flight refueling is a combat multiplier that provides the flexibility needed to have a dynamic Air Force.”