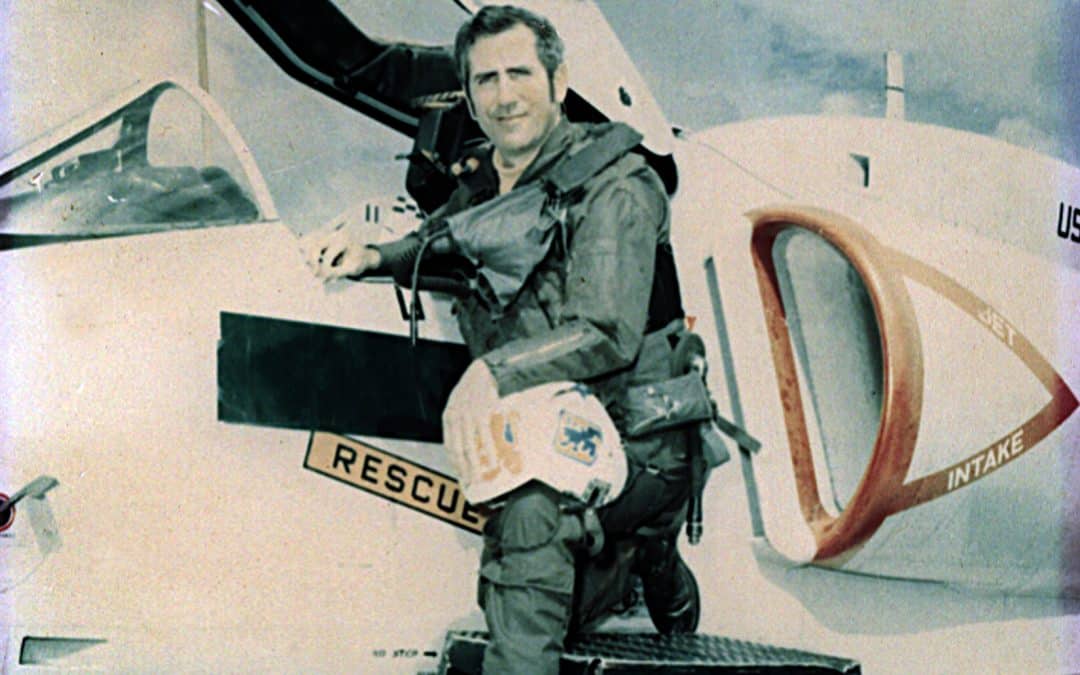 Editor’s Note: Navy Commander Chuck Sweeney began his Naval career as an engineer, testing electronic equipment but quickly became interested in flying. He set his sights on becoming a tailhook pilot, and while in Naval Postgraduate school, applied to fly the Douglas A-4 Skyhawk. It was a fortuitous career goal. In 1972, Sweeney was awarded three Distinguished Flying Cross medals for strikes against the North Vietnamese, all conducted in the span of a week. The DFC citation is awarded to members of the U.S. armed forces for acts of heroism or extraordinary achievement during aerial operations. Here are excerpts from a recent conversation with Sweeney, who is the current president of the Distinguished Flying Cross Society, lightly edited for space and clarity, as told to FLYING.

I was determined I was going to get into a jet. [The Navy] sent me to Naval Postgraduate School, trying to make me smarter. I tried avoiding that, but they said no. But while I was there, I applied to go fly the A-4 Skyhawk. My wife said, “You’re too old. They won’t take you.”  I said, “Yes, they will.” I was 33 at the time. But they were losing so many pilots that they took me. I said, “They were looking for cannon fodder, and I can do that.” That got me into A-4s.

[In late summer 1972 during the Vietnam War, Sweeney was abruptly reassigned to a carrier to replace the executive officer of Attack Squadron 212, who had been shot down and was listed as missing in action.]

I was out there, probably two weeks or so. We had had a storm. We were launching the aircraft, and it was the last flight of the day. I was leading three other airplanes, and then we broke off. Two went one one way and two the other. We were looking for targets.

The other two found targets. They found some trucks. They did a no-no and they made multiple runs. On the third time they went to bomb the trucks, the wingman got hit. It was dusk, it was a heavy overcast. It was the last flight of the day—it wasn’t dark but it wasn’t light. And you could see his plane was on fire. It looked like a Roman rocket coming out, and it was climbing, trying to get altitude but also trying to get over the water. He managed to get maybe 3 miles offshore. The plane’s engine had quit and so he was losing altitude but when he felt he was overwater, he ejected. It worked perfectly.

He landed in the water. I became what they call the on-scene commander. The SAR—search and rescue commander. I was in charge of getting him back.

The rescue helicopter had shut down for the night, but they launched it from the destroyer. And I sent two A-4s to escort the helo up to where we were.

I assigned four other aircraft to go after—I knew there would be some [North Vietnamese anti-aircraft artillery] sites. I assigned my wingman because I figured there was a coastal defense gun that would open up some time, and I assigned him to take that out. But I was doing all this, writing everything down on my keyboard, just a 5-by-7 piece of paper, trying to keep tabs of everything.

The helicopter finally shows up. They flew over and they went maybe 1,000 yards, and then they dropped their smoke light. Usually the helicopter drops a smoke light so that they can get the direction of the wind down at water level.

When they went over him, the swimmer jumped out of the helicopter and landed in the water with the survivor. He’s only 2 and a half miles offshore of Vietnam. That took guts, that really did.

They finally picked him up. I was circling, all of us, we’re orbiting out over the water. One of the times, I guess I wasn’t paying attention, and I got a little too close to land. One of the AAA guns opened up on me. [They had figured out] who was in charge. And I thought, “I still have my six bombs, maybe when this is over, maybe I’ll find a place to get rid of them.” It was kind of a dumb thought, but I thought it.

[The rescue helicopter] picked up the swimmer and the pilot. They reported that they were in the helo and they were on their way back to the destroyer. So I reported [that back] to the admiral. I thought, everything’s hunky dory. Nobody’s been hurt. It’s time to get rid of my six bombs. And I started heading to work. I was only maybe 3 miles from the AAA site. And this voice came up on the radio. It was the deepest voice I had ever heard. And it said, “Flying Eagle 312, this is Jehovah. Report all chicks feet wet.” Well, Flying Eagle 312 was my call sign. Jehovah is a personal callsign of the admiral. And he was asking for me to report that everybody was out of the water and that everybody was safe. I thought, “Should I drop my bombs?” In microseconds, I processed it. He can’t see me. He only knows what I’m telling him. So I went in and dropped my bombs, got some secondaries and I actually saw the gun barrel come up. And then I got back over the water and reported, “all chicks feet wet.”

A couple of days later, they assigned me to lead what was called an “Alpha strike,” which I called a gaggle. It’s about 35 aircraft going after a single target in North Vietnam. It was the first time I had ever led one in combat. I’d say it was a successful mission, we got pretty good coverage on the target. I can’t say we got it all, but they weren’t going to be operating for quite a while.

Then the next day, I led another Alpha strike. I had three other aircraft with me, but we were on the very left side of the whole flight. We were headed in, and then we were supposed to make a right hand turn. About that time, SAMs—surface to air missiles—we got signals that they were launched. And you could actually see them take off. And you couldn’t tell for a while who they were tracking. You just knew it was coming toward our group.

As one got closer, I realized that it had my name on it. The rule with how you handled that was—back in those days, and they still do it against that particular missile—was when it looks like a flying telephone pole, you do a barrel roll around, and it can’t follow you.

[In training] I kept asking, “I’d like something more definite than that.” They said, “Trust us. You’ll know it when you see it.”

Sure enough, this thing came up, and by this time it was close enough, I could tell we were the target. The four of us. When it looked like a flying telephone pole, I did a barrel roll to the left and the other three planes stuck with me. They knew that was their salvation too. And the missile didn’t hit us.

It went somewhere and probably blew up, or maybe went up and then came back down and blew up. I don’t know. Once it passed us, I didn’t care.

In the meantime, the whole rest of the group made their right turn, so now I had to catch up. I did just as they were turning in toward the target. We had some more SAMs and AAA come up. We got to the target area and our target was actually underwater so had to pick it out on another target. We hit a couple of trains and we got some secondaries and survived, and came back out. I was awarded another DFC. I ended up with three of them in a week. I wasn’t bored.

To me, it didn’t change anything. I was very, very glad I kept my squadron mate out of the Hanoi Hilton. That was a big thing to me. I was just glad everything worked out. We were able to do that. But everybody else that was on that flight with me did what they were trained to do.