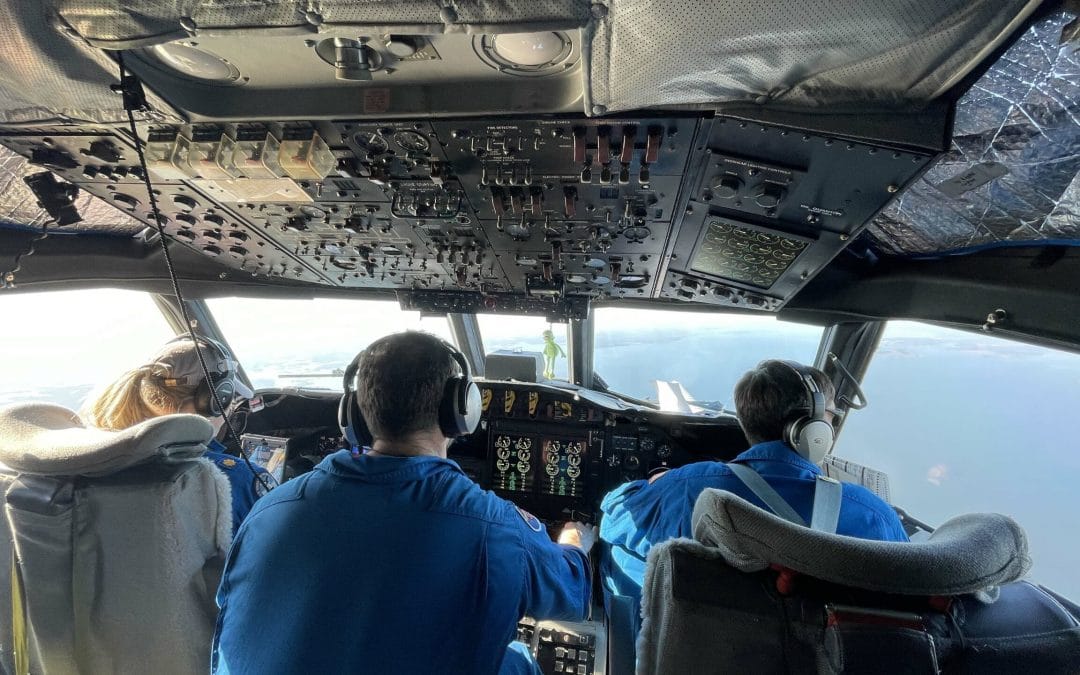 It’s an approximately three-foot-long drone called Altius. These small, fixed-wing drones are launched from NOAA’s Lockheed WP-3D Orion twin turboprops and are designed to fly into the most active parts of a hurricane at lower altitudes and remain aloft for one to three hours. The drones then send precious weather data back to the Orion, which would be flying at altitudes around 8,000 to 10,000 feet.

“This new technology is going to really advance what we know about how storms form—not just where they’re going—and when a storm is going to form and when it’s going to intensify,”  NOAA Corps Lt. Cmdr. Becky Shaw told FLYING on Friday.  “We’re going to have the whole story on the storm now.”

Since the 1960s, NOAA pilots have been putting it on the line to fly through some of the roughest storms nature has to offer. Based at Lakeland Linder International Airport (KLAL) in Lakeland, Florida, NOAA’s hurricane hunter fleet includes two Orions that essentially perform as flying research labs for studying storms. The team’s third aircraft is a twin-turbofan Gulfstream IV-SP, which is used to fly above and around hurricanes.

Currently, NOAA is completing safe separation and communication tests of the drones, to make sure they deploy as designed and can effectively send data back to the aircraft. They’re launched in tubes from openings on the underside of the P-3s. A small parachute deploys, which triggers the unfurling of the drone’s wings. At that point the drone begins controlled flight.

The Altius drones are different from dropsonde devices which NOAA currently uses to study hurricanes. Dropsondes are data-gathering objects that are released from aircraft and parachute to the ocean surface. As they fall, they send information to the aircraft about air temperature and pressure, wind speeds, and humidity. These devices offer a snapshot of storm conditions, while the new drones will be able to measure changing conditions over time.

Altius is not intended as a replacement for dropsondes, Shaw said. Instead, the data from Altius will be used to augment what scientists learn from dropsondes.

Not only does this kind of data help scientists understand the structure and intensity of each storm, it also gives people in a storm’s path ample time to prepare for disaster or evacuate, if necessary.

Flying into the Storm

Shaw—a graduate of the U.S. Naval Test Pilot School—shared with FLYING a few details about the actual flight dynamics of piloting an airplane into a hurricane. In a phrase, she said, the experience is “really incredible.”

During flight inside a hurricane, “I’m not touching the power levers at all. The wind speed and the windsheer will change very quickly, so the flight engineer is actually moving the power levers really quickly. If you’ve seen the videos online, you’ll see they go to max power, then to idle—and you never fly an aircraft like that. But in a storm you have to, because the wind can change so quickly.

“In the left seat, I’m just doing everything I can to hold wing level and to have the pitch at 210 knots. 220 is our turbulent air penetration, and then what we call 200, slow. In the brief we’ll say, ‘I’m going to fly 210. If we get down to 200 knots and you’re at max power and there’s still no changes, we’re still being slow (and that happens most normally), I’m going to start to pitch down to get some speed back.’

And that’s the only time you’re going to prioritize your air speed over altitude—because you need to get that altitude for the science data.”

Although the current NOAA Hurricane Hunter fleet remains in good condition, she estimates the Orions will be replaced around 2030 with a turboprop type that has yet to be determined.

Meanwhile, the first operational Altius drones are expected to be sent into storms soon.

“We have a couple more milestones we need to make in order to sign off the new drones for fully operational crews,” she said. NOAA expects to hit those milestones within the next two weeks. “We’re very close.”

Shaw believes NOAA is leading the way when it comes to flying drones from aircraft.

“We’re doing it safely and we’re doing it systematically and we’re creating a lot of really good lessons learned,” she said. “Even though we’re an oceanic and atmospheric organization—through our test team, our science team, and our engineering team—we’re pushing forward on aviation as well.”