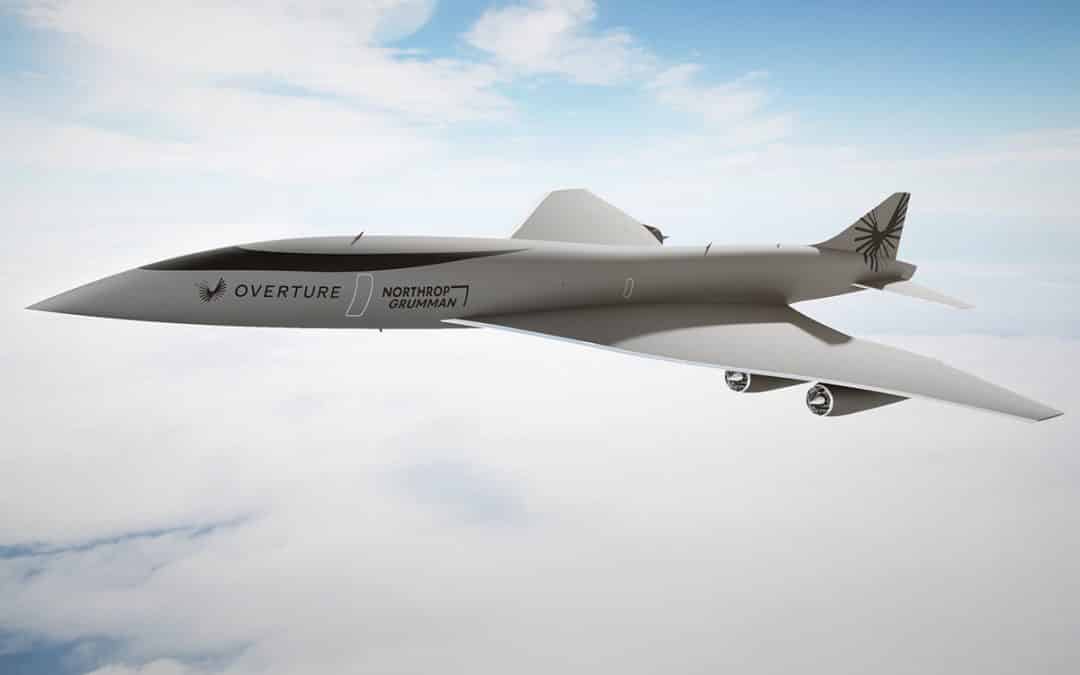 If it feels like you’ve been hearing about Overture for a while, you’re right. Boom has been developing Overture since 2016 and the company says it isn’t expected to enter service until at least 2029.

On Tuesday at the U.K.’s Farnborough International Airshow, Boom announced it has joined forces with the iconic company that led development of the James Webb Space Telescope, the U.S. Air Force B-2 Spirit stealth bomber, and NASA’s Apollo LEM lunar lander.

Overture is designed to fly at speeds up to Mach 1.7 over water with a range of 4,250 nm. In addition to the military variant, Overture unveiled a refreshed design for its airliner Tuesday, which Boom said, is the “culmination of 26 million core-hours of simulated software designs, five wind tunnel tests, and the careful evaluation of 51 full design iterations.”

The aircraft will now be powered by four wing-mounted engines instead of two wing-mounted engines and a rear engine. It will also include a contoured fuselage and gull wings. Response to the redesign initially seemed to raise more questions than it answered. The revelation of Northrop Grumman’s involvement has helped to fill a few gaps in the program’s trajectory.

The military variant, Boom said, would be a supersonic aircraft tailored for quick-reaction capabilities. It would carry up to 80 passengers for missions that require rapid response, such as delivering medical supplies, or providing emergency medical evacuations. The aircraft, Northrop Grumman said in a news release, could “surveil vast areas faster than conventional aircraft.”

“Time is a strategic advantage in high-consequence scenarios, from military operations to disaster response,” said Blake Scholl, Boom founder and CEO in a news release Tuesday. “This collaboration between Boom and Northrop Grumman unlocks Overture’s unmatched high-speed mission capability for the United States and its allies.”

Tom Jones, president of Northrop Grumman Aeronautics Systems, said in a released statement that by teaming up, the two companies “can ensure our military customers have variants of Overture for missions where advanced system capabilities and speed are critical.”

Where Can You Fly Supersonic?

During the 19 years since the last flight of Concorde in 2003, several projects have been announced aimed at returning civil supersonic travel to the airways.

Lockheed Martin and NASA are developing a faster-than-sound research aircraft with a quieter sonic boom. Spike Aerospace—based in Boston—is working on a supersonic business jet called the S-512. California-based Exosonic is designing an uncrewed supersonic aircraft that it hopes will lead to a quiet supersonic passenger airliner.

Boom’s sub-scale test article—XB-1—is expected to make its first flight later this year, the company told FLYING. But flight testing of civil aircraft at supersonic speeds over land has been tricky since the FAA banned supersonic overland flights in the 1970s under Part 91. The ban was a response to broken windows and other damage from sonic booms.

Generally, the U.S. Air Force requires its supersonic flights take place over open water, above 10,000 feet, and at least 15 miles off shore. Supersonic operations over land must be conducted above 30,000 feet or, when below 30,000 feet, in specially designated areas approved by the Air Force and the FAA.

Aircraft traveling faster than the speed of sound (about 750 mph at sea level) produce shock waves—the sudden onset and release of pressure produces a sonic boom. In fact, the most powerful sonic boom on record measured 144 pounds per square foot, according to the U.S. Air Force. (That  boom was produced by an F-4 flying slightly faster than supersonic, at 100 feet agl.)

In 2021, prompted by “development of a new generation of supersonic aircraft,” the FAA issued a rule “modernizing the procedure for requesting a special flight authorization to operate in excess of Mach 1 over land in the United States.”

Boom told FLYING it has been “working with the FAA on a [special flight authorization] per [Part] 91.818 to allow supersonic overland flights in specified areas, such as the ‘supersonic corridor’ in the Mojave Desert.”

When flight testing begins for Overture, Boom told FLYING it plans to “evaluate testing in supersonic corridors that are available,” but the company currently expects to perform flight tests along the Eastern seaboard near the Overture “superfactory,” in Greensboro, North Carolina. Boom says it will break ground on the new facility later this year.

Meanwhile, aviation authorities in Kansas say they’re ready for a surge in civil supersonic aviation. In 2020, the state inked an agreement with the FAA creating an official Supersonic Transportation Corridor (SSTC), covering a 770 nm swath of Kansas prairie just north of the Oklahoma border. Kansas says the route—which is within range of several airports—can accommodate sustained flight at speeds as high as Mach 3.

“Our vision is to build a robust flight test infrastructure, centrally located in the U.S., where [the] FAA and general aviation manufacturers can collaborate to certify emerging aircraft technologies safely in a more expeditious manner,” Bob Brock, Kansas director of aviation, told FLYING. “We’re working with the National Institute for Aviation Research at Wichita State University to deploy an array of acoustic sensors in key locations across the state to monitor the effects of aircraft noise.”

The data, along with live telemetry from test aircraft, is expected to help engineers improve aircraft performance, and study potential sonic impact on the environment.

“Right now the technologies that they’re using, and the altitudes that we’ve actually selected for this activity are above 39,000 feet,” Brock said. “That altitude is high enough to actually mitigate the noise impact in a way that we really believe is going to be very nominal, of any impact on the ground.”

“I don’t think that there could be a more exciting time for growth and transportation, than during a time when growth is desperately needed across the whole country.”

Brock pointed out that Kansas has 138 airports. Aircraft manufacturing and other economic impacts from aviation, he said, total $20.6 billion statewide.

“Within Kansas, we have roughly 19,300 people that are either building, designing, or working with aircraft,” Brock said. “The state has the resources and skilled workers to field 2,000 new jobs in the first year of aircraft manufacturing,” he added. “That is part of the reason we think Kansas is a great place to advance these type of technologies because we’re already good at that.”

In a separate project,  NASA and Lockheed Martin are expected to fly the X-59 supersonic research jet later this year for the first time. [Courtesy: Lockheed Martin]

In Palmdale, California, NASA’s X-59 program, in partnership with Lockheed Martin, aims to build a supersonic demonstrator that reduces sonic booms to a gentle thump. The jet’s long nose and other features are designed to reduce noise by shaping the shock wave. After its first flight, which is expected later this year, NASA plans to fly X-59 over selected U.S. cities to collect data on impact from the sonic thumps. That data will be shared with the FAA and the International Civil Aviation Organization. In the future, the data might be useful in the establishment of rules for supersonic civilian operations over land.

“That’s where public awareness really comes in as critical—working with companies and local elected officials to highlight that there are these technological advances that will really be beneficial to the community,” Shilad told FLYING. “We can achieve both. You can achieve noise mitigation and support industry growth at the same time. It’s a win-win situation.”