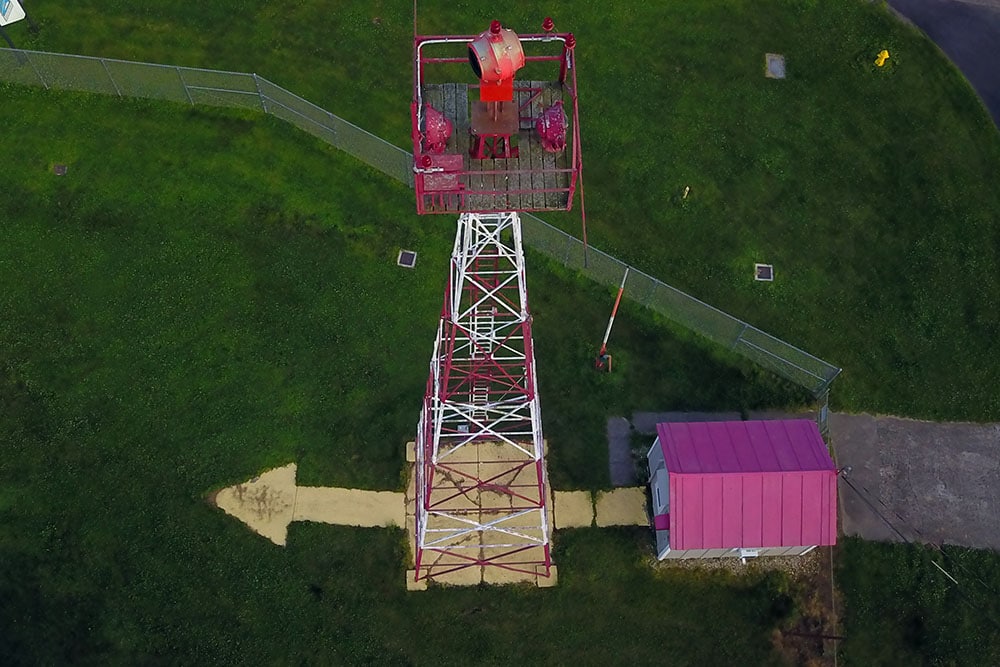 Just about every pilot today knows the mantra, “Follow the magenta line,” as a reference to the line GPS navigation systems use to lead us to our destinations. But almost 100 years ago, airmail pilots advanced commercial aviation when they began following yellow arrows.

The arrows were 50 to 70 feet long, made of concrete and positioned across the U.S. often at three-mile to five-mile intervals to mark airways that connected major cities on the mail routes. They were part of a rapidly developing system that included the introduction of rotating beacons and airfield illumination for aerial navigation at night, according to the National Postal Museum.

It’s easy to mount an informal scavenger hunt, especially since many of the remaining sites are at airports.

Flying was an analog endeavor during the 1920s when airmail was new. Pilots, typically in open-cockpit biplanes, followed the beacons to stay on course, and as they passed over, they looked down at the arrows, which formed bases for the steel towers on which the beacons were mounted. The arrows, also illuminated at night, pointed toward the next station and were especially helpful when visibility was poor, and pilots could not see the next beacon. IFR minimums were still years away.

Today, pilots can spot the remaining (or remains of) the arrows. There are reportedly more than 100, mostly in western states like Nevada, Wyoming, Utah, and Oregon but also stretching east into Ohio, Pennsylvania, and Connecticut. The website Arrows Across America includes history, photos, and GPS coordinates of 126 concrete arrows. These relics make it possible to retrace parts of the original routes and get some sense of the difficulties airmail pilots faced.

It’s easy to mount an informal scavenger hunt, especially since many of the remaining sites are at airports.

The arrows tended to outlast the towers and utility sheds that accompanied them and are often all that is left on former beacon station sites. A few, however, have been preserved or restored.

One well-kept example that still has its tower and beacon is at Guthrie/Edmond Regional Airport (KGOK) in Guthrie, Oklahoma. Airport manager Schellon Stanley said she began sprucing up the beacon site after taking the manager job in 2015. Repainting the weatherbeaten arrow was a highlight of the project, she said.

Pilot Barnard Kemter and others bent on preserving aviation history have maintained a beacon station at Newark-Heath Airport (KVTA) in Heath, Ohio, which once served as an intermediate landing field on the airmail service’s Cleveland-Philadelphia airway.

Today, as pilots fly with glass panels, GPS, synthetic vision, and ever-improving autopilot technology, the idea of following arrows on the ground and a strip map on your lap may seem primitive. But the system was a breakthrough at the time because it allowed airmail pilots to fly more accurately and reliably at night.

Before the network of beacon stations, mail would be transferred to trains at night and put back on aircraft the following morning. This inefficient system got the mail across the country faster than trains alone but wasn’t a big improvement. Flying the mail day and night was a turning point that got the U.S. government to take airmail seriously. This was the beginning of the airline transport system we know today, the Postal Museum says.

Between 1918 and 1927, the U.S. Post Office Department ran the national airmail service after a brief period when Army pilots carried the mail. The post office set up airmail routes, acquired aircraft and hired and trained pilots. In 1927, the department turned the operation over to private contractors but its influence remained vital.

Because passenger demand was scarce, early airlines made most of their revenue from contracts to carry mail. As safety improved with the rapid advancement of aircraft technology during the “golden age” between the wars, more people were willing to travel by air, and doing so became somewhat more accessible.

Within 10 years of the post office privatizing air mail service, the mail fleet moved from fabric-covered biplanes to metal airliners like the Douglas DC-2 and DC-3, which were more hospitable for passengers.

The network of airmail beacon stations arguably gave commercial aviation the well-timed boost it needed to make the transition from its barnstorming origins to the global powerhouse it is today.

So on your next cross-country flight, set a course for one or more of the former navigation sites and try to spot them. And think about using a paper chart and pilotage, just for kicks.