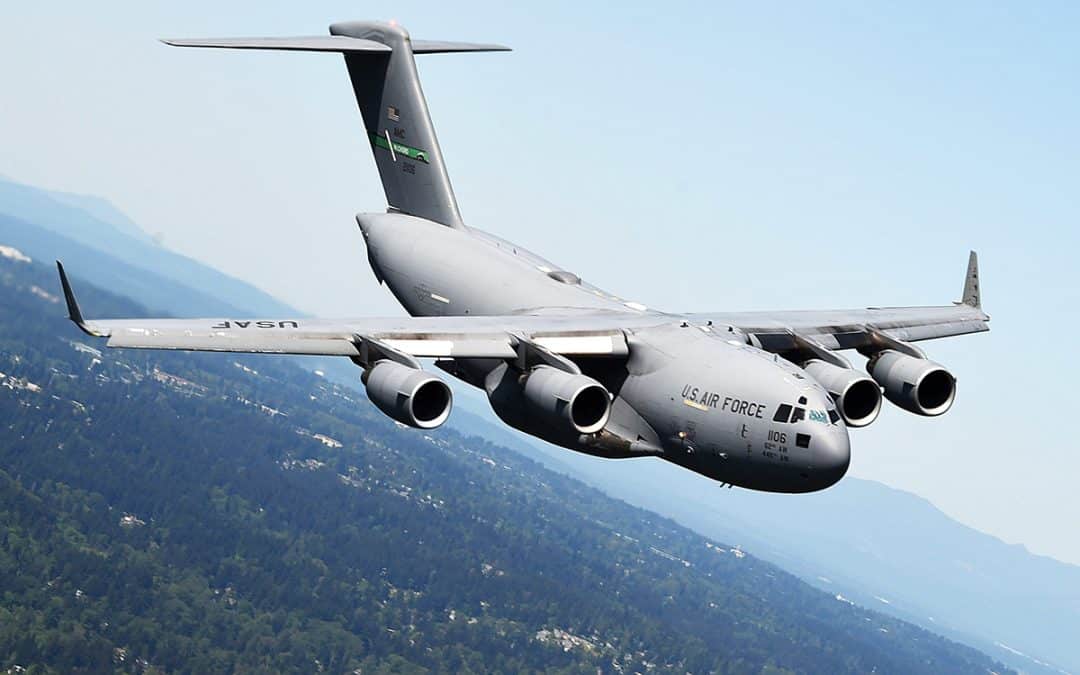 Faster than a Lockheed Martin C-130 with more agility and lower maintenance costs than a C-5, the McDonnell Douglas/Boeing (NYSE: BA) Globemaster III strategic airlifter—affectionately dubbed The Moose—has proved to be the master of short-field takeoff and landing capability.

This week, a Globemaster operated by the C-17 West Coast Demonstration Team based at McChord AFB (KTCM) in Tacoma, Washington, was among the stellar airplanes on hand at EAA’s AirVenture airshow in Oshkosh, Wisconsin, celebrating the 75th anniversary of the U.S. Air Force.

The jet’s talent with short-field takeoffs and landings, a fast cruise speed of 450 knots, and an effective cargo capacity helped this successful platform support military operations around the world. Even in Hollywood, the C-17 has become somewhat of a go-to platform for action films, starring in several remarkable movie stunts—whether it be digitally created or in real life.

Walk Through the C-17 Flight Deck

When you step onto the flight deck of the aircraft,  you’re met with a relatively spacious area, including two jump seats. But the first thing that may catch your eye are the control sticks that are used to fly the C-17, instead of the yoke control columns found on the flight decks of other airlifters.

On Wednesday, Maj. J.R. Greenway and Maj. Nick Cooley hosted FLYING on a video walk-through of the C-17 flight deck and the jet’s flight characteristics, including its ability to fly like a much smaller aircraft.

A key element of the aircraft is a flap system developed by researchers at NASA in the 1950s. Known as the “externally blown flap” or “powered-lift system,” the Globemaster can make slow, steep approaches while carrying heavy cargo loads.

Steep approaches allow pilots to make precision landings on short runways. In the jet’s flap system, exhaust from pod-mounted engines impinges directly on conventional slotted flaps and is deflected downward to augment wing lift. According to NASA, aircraft with blown flaps can operate at roughly twice the lift coefficient of conventional jet transports.

The Business End of the C-17

Inside its enormous cargo hold, you see the business end of the C-17. The jet not only has capacity to carry and airdrop more than 100 soldiers and their gear, but it also has the ability to airdrop palletized supplies and military equipment by parachute, including Humvees, eight-wheeled Stryker armored vehicles, and other cargo.

Designed to airdrop 102 paratroopers and their equipment.

Engines are based on the commercial Pratt and Whitney PW2040 which are also used on the Boeing 757.

Each engine is rated at 40,440 pounds of thrust and includes thrust reversers that direct the flow of air upward and forward to avoid ingestion of dust and debris.

As you might expect, the C-17 is quite the fuel guzzler, which has prompted the Air Force to target a program aimed at reducing its fuel consumption.

Last year, the C-17 passed 4 million total flight hours, as the Pentagon seeks to maintain the effectiveness of a fleet with an average age of 16.5 years. Last year, Boeing was awarded a $3.4 billion contract to keep the U.S. C-17 fleet flying for the next 10 years.

According to National Defense Magazine, U.S. Air Force Brig. Gen. Ryan Samuelson, Air Mobility Command’s deputy director of strategy, plans, requirements and programs, said the C-17 will continue to fly into the late 2050s and 2060s. So it appears that The Moose will be loose for some time to come.