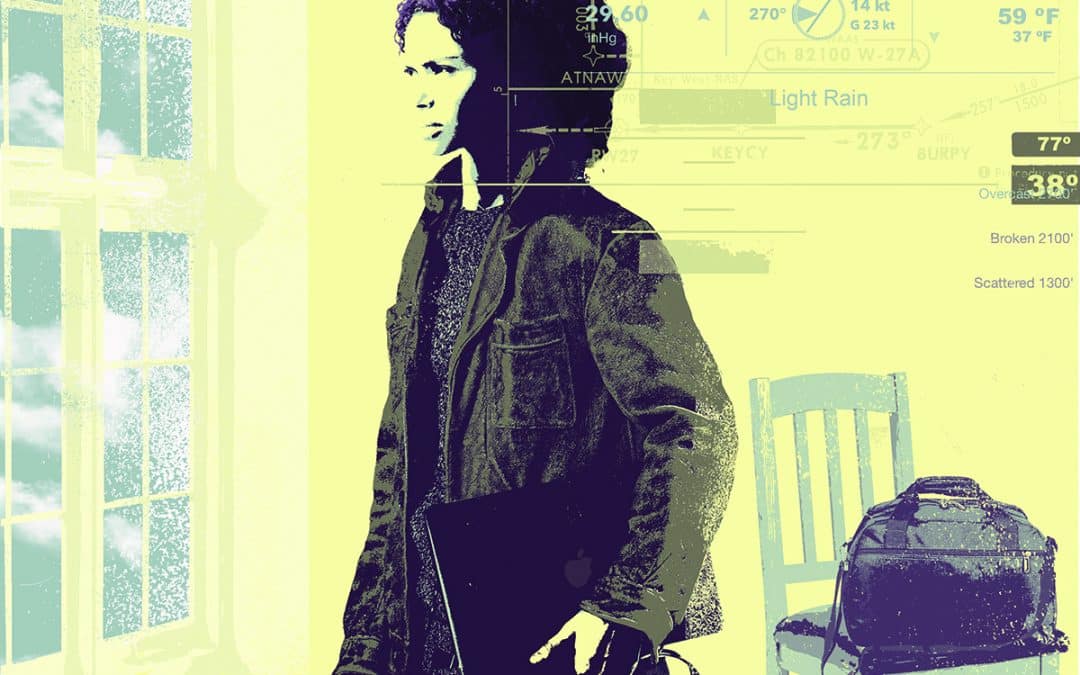 There’s good reason why flight instructors place weather limitations in a student pilot’s logbook. These limitations must be in place because most student pilots don’t have the experience to determine where their skill ends and luck begins. Once you’ve earned your sport or private pilot certificate, it’s your responsibility to establish your personal weather limitations—and abide by them on every flight.

The purpose of having personal limitations is to mitigate risk. Personal limitations are predicated on pilot experience level, familiarity with the airplane, knowledge of the area, the weather, and the nature of the mission. They cover much more than just weather considerations.

As a student pilot, you learned about the “Swiss cheese model” that results in accidents. When all the risks line up—the holes in the cheese—accidents happen. The FAA has provided pilots with checklist tools (IMSAFE and PAVE) to help identify and assess risk before each flight.

IMSAFE guides the pilot to check if they are affected by illness, medication, stress, alcohol, fatigue, and/or emotion and eating. PAVE prompts the pilot to consider: pilot currency/skills, airplane condition, en-Vironment (includes weather), and external pressures.

If anything pops up for you when you run through either checklist, identify the risks, and ask yourself if they can be safely mitigated.

Is the No. 1 VOR in the aircraft in need of a VOR check? Do you need it for the flight? If the answer is yes, could you take care of it?

How is the weather? Will it be a challenge? Could you reschedule for later in the day after the weather improves?

Thunderstorms in the region in which you plan to fly should give pilots pause. If storms fall in a line, passing through that line requires a 40 nm gap between cells—in order to make a safe transit, according to the author. [Photo: Adobe Stock]

One of the first things an aviator learns is that there is a big difference between FAA-defined currency and pilot proficiency. Often it’s the lack of proficiency that gets pilots into trouble—sometimes when they have non-pilot passengers on board.

Although three takeoffs and landings within 90 days make you current according to FAA regulations, you may want to impose a personal limit, such as, “I will not fly with passengers or in marginal VFR unless I’ve flown within the preceding two weeks,” or “If it’s been more than 60 days, I will remain in the pattern for X number of touch and gos before I depart the area.”

Most pilots take great pride in their skills, and some go so far as to write down a commitment to maintaining proficiency and currency, noting, “I will make an effort to fly at least three times a month, for at least two hours.” This is followed by a plan to remedy the situation if they cannot keep the commitment, such as “If it has been more than 45 days since I have flown, I will take a qualified instructor with me.”

Many FBOs have a policy like this written into their rental agreements. For example, some require that if you have not flown one of their aircraft in the preceding 90 days, you must fly with an instructor.

SCENARIO 1: WHEN THE WEATHER IS BELOW YOUR PERSONAL WEATHER LIMITATIONS

THE WEATHER IS MARGINAL VFR and it is late afternoon. You’re a VFR pilot on day 86 of the 90-day currency cycle, so you rush out to the airport to get in three takeoffs and landings. In two days’ time you have promised to take your boss’s kid for a flight. You have a little more than an hour before sunset, and you are not night current. The winds are calm. As you turn on to downwind, you notice fog is starting to appear about three miles off the departure end of the runway. What are your options?

• You could rush to try to get those three takeoffs and landings in before the fog gets worse.
• You could make a full-stop landing and finish your currency flying tomorrow.

In the time it took you to read that last sentence, you probably identified the risks: a rushed and rusty pilot rushing the pattern leads to a rushed landing, and those elements can put you behind the airplane.

What would you do? You know from training and experience that three touch-and-gos usually take about a half an hour to complete. In theory, there’s time to get them all done. Do you feel confident in your ability to safely finish the currency flight, or would you feel better trying tomorrow? What is the worst that could happen? Is this flight worth the risk?

Flying in an unfamiliar airplane is like cooking in someone else’s kitchen—it can be disastrous if you don’t know where everything is or how it works. When you are flying a new-to-you airplane, raise your minimums. Even if you are instrument rated, you may want to keep the first flight in a new-to-you airplane in VFR conditions, especially when you are learning the panel or avionics suite. If the purpose of the flight is transition training to a faster or more complex aircraft, you may want to stay in VFR conditions so you don’t unnecessarily add to your workload and increase the learning curve.

You may not have any qualms about a few bumps or gusty crosswinds, but your passengers could have other ideas. Both can be terror- and vomit-inducing for the aviation challenged.

If you’re an instructor and you conduct an introductory or primary training flight, you probably have limitations set by the school or FBO (or their insurance company). You also have to ask yourself, “Would I want the learner to fly in this by him or herself?” It is up to instructors to model good risk management. There’s a time and place for challenging weather—but you want them to learn, not be intimidated.

If you are unfamiliar with the area you are flying in, raise the weather limitations—this is the enVironment part of PAVE. If you are a “flat-land” pilot and your normal VFR limitations are three miles visibility and a 1,000-foot ceiling, but you’re flying in mountainous regions, raise those limitations to five miles visibility and a 2,500-foot ceiling—especially if up until then you have only read about mountain flying.

If it is a new-to-you area, study the sectional chart ahead of time, in particular noting the VFR reporting points, visual landmarks, and pattern altitudes. You do not want to be heads down with the iPad or sectional while approaching the pattern to land. You should also seek out mountain-specific instruction from an experienced pilot before you go it alone over high-altitude and mountainous terrain for the first time.

SCENARIO 2: RENTING AN AIRCRAFT WHILE ON VACATION

KEEP YOUR EXPECTATIONS in check if you want to rent an airplane while on vacation. It is not like renting a car where you show your driver’s license, give them a credit card, and off you go. Most FBOs will want to see your pilot and medical certificates, give you an open-book test, and then have you do a flight with one of their CFIs before they rent to you. The checkout can run the better part of two hours. Know this before you go into the situation so you don’t feel pressured to cut corners to “get it done.”

One of the challenging aspects of this situation is that you probably don’t know anything about the FBO’s maintenance. You can, however, ask to see the airplane’s logbooks. Pay attention to the details. If the FBO smells like a fish tank or an ashtray, the CFI you are supposed to fly with shows up in dirty jeans and a T-shirt, and the aircraft looks about as rough as it can be, ask yourself if you really want to fly there. Even if they claim to be the “only game in town,” ask yourself if it’s worth the risk.

Remember, it just takes two holes to line up in the Swiss cheese to give you a bad day.

“Get-it-done-itis”—the close cousin to the deadly “get-there-itis”—can trigger poor decision making. Just about every airport has a story about a VFR-only pilot in a VFR-only airplane who did a scud run in his personal aircraft to get to the airport for a walk-in flight review.

In one example: It was the end of the month and the pilot insisted that it had to be done today, because the aircraft was going in for annual and it had been 23 calendar months since his last flight review. The pilot flew in from his grass strip about five miles from the airport. His assessment of the weather was, “it looked pretty good,” but after some questioning from the CFI, he admitted he had made the flight at 500 feet agl to avoid the clouds. He estimated the inflight visibility to be about two miles. He told the CFI that normally he would not fly unless he had at least a 1,000-foot ceiling and three miles visibility, but he “really, really, really needed to get this done.”

The CFI asked the pilot about his personal weather limitations. Was he comfortable during the flight? Would he have brought a passenger with him? The answer was “no” to both questions—settling the matter—that in making the flight, he broke his own parameters.

SCENARIO 3: THUNDERSTORMS: HOW CLOSE DO YOU GO?

ANOTHER TYPE OF WEATHER limitation strikes when thunderstorms boil up in the region in which you plan to fly. Most pilots have heard a common safety rule: Stay clear of any storm by at least 20 nm. If storms fall in a line, passing through that line then requires you to have a 40 nm gap between cells in order to make a safe transit.

This is probably one of the most readily “busted” weather limits out there, as pilots commonly fudge that distance by half. They get away with it—for a while.

And then, inevitably, they find there’s a good reason for the safety margin. That’s because cells often generate severe turbulence and toss out precipitation far from their primary visible cloud formations.

This is one personal limit you don’t want to bust.

This article was first published in the Q2 2022 edition of FLYING Magazine.