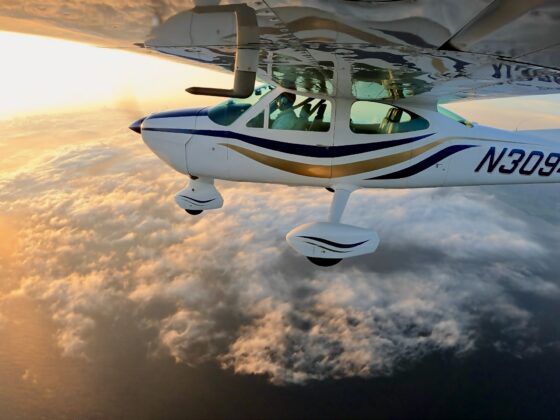 1 of 4
This is a still extracted from a GoPro Hero 9 video recorded while I flew my 1971 Cessna 177B Cardinal. Image by Jonathan Goldstein.

PICTURE OF THE WEEK: Summer Morning Over New York Bay

Happy July 4th featuring this 1948 Cessna 140, all polished up and ready for the camera. This shot was taken in the early evening on September 17, 2021 at John Wayne Airport (SNA) in Orange County, CA with a light summer breeze keeping the flag waving gracefully above. Photo by Jason Herman.

While flying out of Nephi, Utah, I was attempting to make a 500km (311 mile) flight to earn a Soaring Society of America Diamond distance award. I made it about 450km before the lift disappeared for the day around 7PM and I “landed out” at Salina-Gunnison airport. Shot while awaiting my buddies to come pick me up with my glider trailer. Taken with a Google Pixel 6 phone. Copyrighted photo by John H. DeRosa.

Level at 9,500 feet in a turbonormalized F33A Bonanza. 214 mph on 16 gph. No shortage of glass in this cross country beast. Picture taken with an iPhone by my daughter, Katie, from the back seat. Photo submitted by Gregory Gilbert.

Southbound to Bend, OR

The post Picture Of The Week, August 3, 2022 appeared first on AVweb.