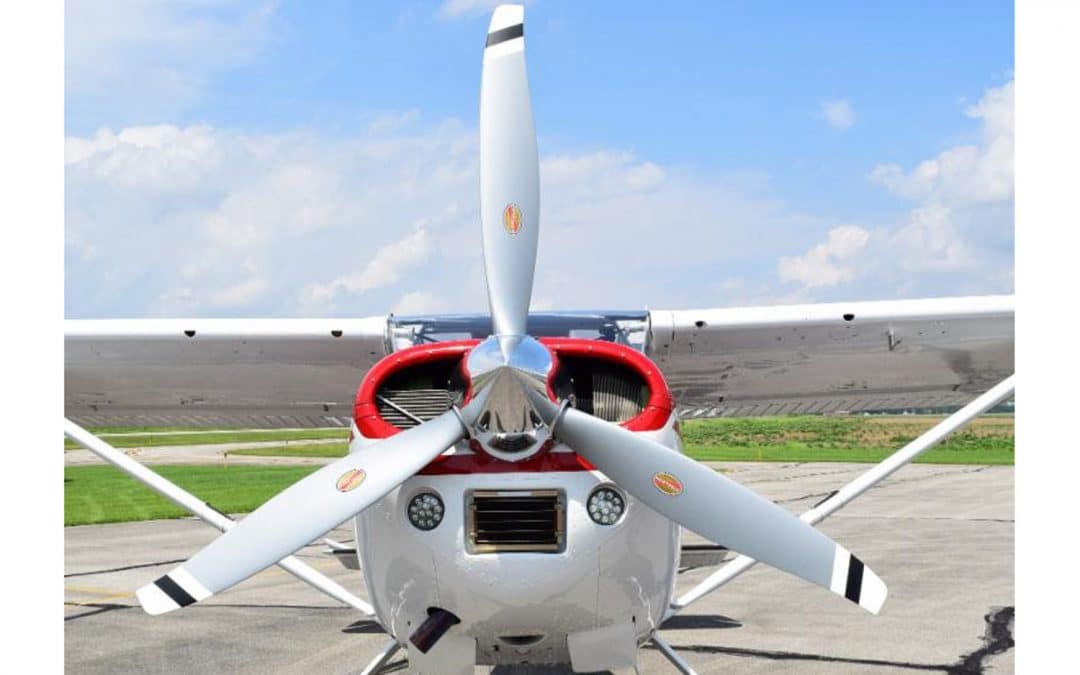 The learner stood in front of the airplane, checklist in hand as he performed the preflight inspection.

He double checked that the magnetos were off before moving to the front of the aircraft. The propeller of the Cessna 172 was in the horizontal position so he did not have a clear view of the engine compartment, nor could he see the alternator belt in order to inspect it. He was reluctant to get too close to the propeller as he had been reading about propeller safety—but how was he to finish the inspection without getting close to the prop? This led to a discussion about how to treat a propeller—I submit it should be treated like a big dog that you do not know—it could do something unexpected that could hurt you, so give it the respect it deserves.

Hazards of a Still Propeller

Although you shouldn’t be afraid of the propeller, you should understand what it is capable of doing—and never ever become complacent. There is a reason it is called a ‘propeller blade’—it can have sharp edges. I learned this one the hard way as a fledgling pilot.

I knew enough to make sure the magnetos were off and the key was out of the ignition before I approached the prop to inspect for “blade erosion, nicks, cracks, pitting, corrosion, and security” per the checklist. I positioned myself in such a fashion you would have thought I was about to have a knife fight with the prop—I was ready to dive away if the propeller moved. I reached out my right hand and (foolishly) ran my fingers over the top of the horizontal blade. There was a sharp pain in my right index finger and a lot of blood followed by a lecture from my instructor about being more careful. That was the day I learned how to use my thumbnail to check the edge of the propeller. I also learned how an A&P mechanic can file down the prop to remove a nick, then file the other side so that the propeller remains balanced.

It is not just sharp edges that can hurt you when the engine is off. If the magnetos are still engaged—if someone didn’t turn off the ignition properly, or there is a broken ignition wire and the spark is not grounded to the airframe, bad things can happen. If there is fuel left in a cylinder, moving the propeller in the direction of rotation—such as what’s done when one is hand propping an aircraft—can result in the propeller “kicking,” that is, moving with more force than you are expecting.

For this reason, if you need to reposition the propeller on the Lycoming or Continental engine—say to get a better view of the engine compartment and alternator belt during the preflight inspection—take care to rotate the propeller opposite the direction of normal travel as viewed from the cockpit. I learned this from Art Wegner, an A&P [airframe and powerplant mechanic] with more than 40 years of experience. Art advised, “Always best to be clear of prop when messing with it whatsoever.”

Richard Scarbrough, A&P mechanic and FLYING Magazine contributor, confirmed that the technique of rotating the propeller backward when it needs to be repositioned is safer than moving it forward in the normal direction of travel. However, he said he heard some complaints that this practice is bad for the vacuum pump, “but that has never been substantiated.” And many airplanes of recent vintage no longer have a vacuum pump in any case.

There are some times when you have to be close to the propeller—such as when you are hand propping an aircraft. This is common practice with aircraft that lack an electrical system, but as aircraft with electrical systems have become commonplace, the knowledge of how to safely hand prop an airplane has become very much like driving a five-speed. It can be a challenge to find someone who knows how to do it, and is comfortable doing it.

You will find instructions on hand propping in Chapter 2 of the FAA’s Airplane Flying Handbook, beginning with the warning: “Hand propping requires a team of two properly trained people. Both individuals should be familiar with the airplane and hand propping techniques. The first person is responsible for directing the procedure, including pulling the propeller blades through. The second person sits in the airplane to ensure that the brakes are set and to exercise controls as directed by the person pulling the propeller. When hand propping occurs, a person unfamiliar with the controls should never occupy the pilot’s seat.”

Other warnings include these: Have secure footing and never curl your fingers over the propeller because you could be pulled into it. Be sure there are chocks in front of the main wheels, and if this is not possible, the airplane’s tail should be securely tied down.

Also, (puts on Chief CFI cap) if the aircraft is a rental, you should be sure that hand propping is an approved procedure at the flight school or flying club, because many schools and clubs do not allow it for insurance reasons—and unauthorized hand propping can get you kicked out.

And, you have probably heard stories about hand propping that went bad—perhaps the pilot tried to do it themselves and the aircraft got away from them, coming to a stop after it collided with another parked aircraft or a hangar; or the person was run over by the aircraft; or worse yet, the person in the cockpit was not “qualified” and didn’t know how to shut down the engine and was injured in the subsequent crash. Sadly, these things still happen.

All pilots and mechanics know the greatest risk comes from the propeller when it’s turning, and the FAA tells us all about it in Advisory Circular (AC) 91-42D: “Hazards of Rotating Propeller and Helicopter Rotor Blades.” The AC notes that a propeller under power, even at slow idling speed, has sufficient force to inflict injuries. For this reason, special care has to be taken during so-called “hot loading,” which is when the aircraft engine is still in operation; therefore, the propeller is turning when people are loaded or unloaded.

The AC cautions against this practice, noting “the engine should be shut down before boarding or deplaning passengers,” however, sometimes this is not done.

In these cases, if there is no option but to hot-load, it’s a good idea for each passenger to be escorted to and from the aircraft by someone familiar with propeller safety, with the understanding that departure from an airplane with a propeller ahead of the cockpit be toward the rear of the aircraft, and when loading an airplane with the propeller turning, the passengers and their escorts should approach from the rear and depart to the rear.

When no escorts are available, pilots warn the passengers to approach from the tail and depart toward the tail. Never walk toward the front of the airplane, because when operating, the propeller disappears in a blur.

Sadly, even when the pilot instructs the passengers to disembark to the rear, they can fail to follow directions. Such was the case on October 16 in Georgia when a 21-year-old college student was killed when he was struck by the moving propeller of a Cessna 172. According to the Statesboro Herald, the student and a woman had been passengers on board the airplane. They had returned from a date at night, and according to authorities, after the airplane landed safely, the woman got off the airplane and walked toward the tail of the aircraft. The man disembarked and walked toward the front and into the propeller.

Even pilots are not immune to this kind of mistake. In 2008, a 26-year-old student pilot flying a Cessna 152 out of Atwater, California, was killed when he walked into a spinning prop at night. The airplane was being flown by another student pilot. Incidentally, the flight was operated in violation of FAR 61.89, which prohibits student pilots from acting as pilot in command of an aircraft carrying a passenger. According to the NTSB report, the students knew they were breaking the rules. They waited for the flight instructor, who had signed off the one pilot for what was presumed to be a solo flight, to leave the airport, then the second student climbed aboard. Upon returning after dark and worried about being caught, the student in the right seat hurriedly climbed out of the airplane— and into the propeller.

Avoid the ‘Hanging on the Prop’ Picture

Several aviation publications, organizations, and flight schools have rules against publishing photographs of people who are either standing in the prop arc or posing with their hand on the prop. The reason? It sends a bad message to the aviation-challenged who don’t know anything about propellers—it can be compared to checking to see if a gun is loaded by looking down the barrel. You’d never do that, would you?

So please, no hand-on-the-prop pictures. It doesn’t matter if you have Amelia Earhart standing on one side of you and Jimmy Hoffa on the other and Bigfoot is photo bombing—please don’t take that picture. Instead, go with the 3/4 shot of the subjects standing in front of the wing of the aircraft—it’s much more effective—it shows more of the airplane.