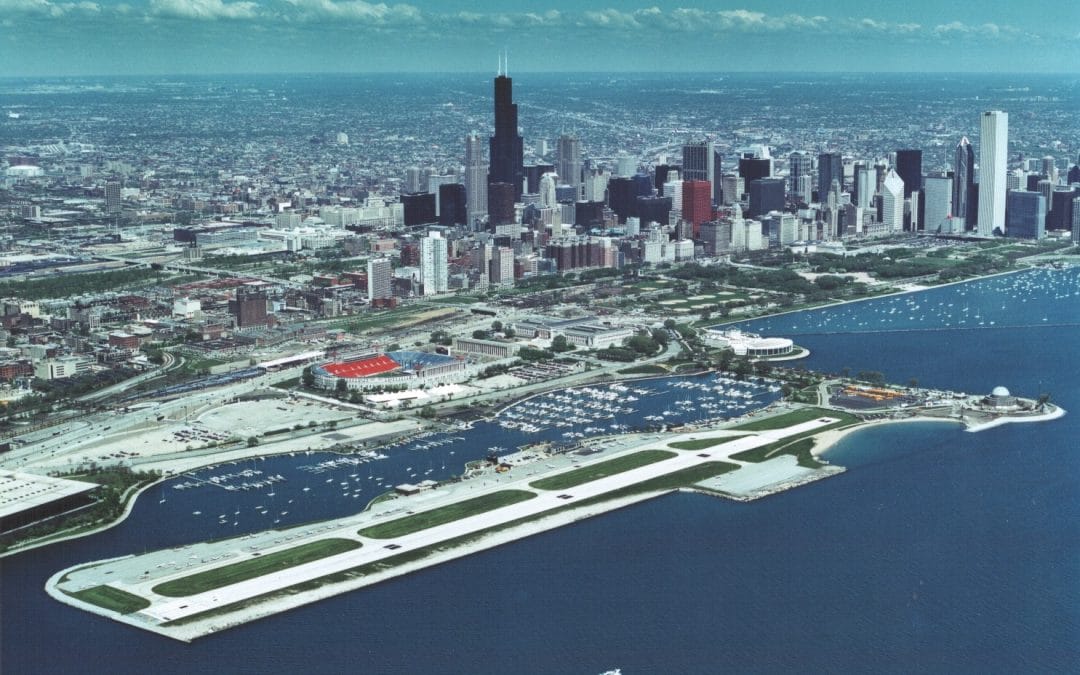 This phrase has become the battle cry of pilots seeking to prevent the closure of their local airports. For 50 years, Merrill C. Meigs Field (KCGX) operated near downtown Chicago. That came to an abrupt end one night in 2003 when heavy equipment was used to destroy the runway. As the 19th anniversary of the airport’s forced closure approaches, aviation groups want to be sure that the loss of the iconic airport—and what the closure represented—is not lost to the sands of time.

The airport was built shortly after World War II on Northerly Island, a human-made peninsula minutes from downtown Chicago. The airport consisted of 75 acres and had one runway. In 1952, the airport was named Meigs Field after Merrill C. Meigs, publisher of The Chicago Herald and Examiner and an aviation enthusiast.

The land, owned by the Chicago Park District, quickly became known as one of the busiest in the United States as it was used by both general aviation and, for a time, commercial carriers. Eventually, the airport added a control tower and an instrument approach.

In the 1980s, Chicago Mayor Jane Byrne suggested closing the airport and converting the land into a park. Local pilots, aviation advocacy groups, and businesses that appreciated the convenience of an airport so close to downtown objected to the idea. The FAA noted that the airport had received FAA grants, and each grant carried an assurance that the airport would remain open a set amount of time—usually 25 years—so that the grants could be amortized. The airport had most recently accepted a grant in 1976. Byrne dropped the idea only to have it picked up again by her successor, Richard M. Daley.

Daley shared Byrne’s opinion that the airport should be turned into a park. In late 1996, he instructed the parks department not to renew the airport’s lease and ordered Xs be painted on the runway. The X means a runway is closed.

In a matter of weeks, pressure from the state Legislature and the FAA resulted in the reopening of the airport with the understanding that the airport would remain open until at least 2026. The painted Xs were removed, and the airport resumed operations.

PHOTO GALLERY: A Look Back at Meigs Field

The aviation community fought back. Public forums with the FAA at EAA AirVenture were marked by audience members holding red-and-white signs that read “SAVE MEIGS FIELD.”

Meigs Field shortly after the destruction ordered by Mayor Daley in 2003. You can see the Xs on the runway. [FLYING Archives]

Then, just before midnight on March 30, 2003, heavy-equipment operators, acting on orders of  Daley, trundled on to the peninsula with orders to destroy the runway. The equipment operators gouged large Xs into the 3,900-by-150-foot runway. The Xs were actually trenches that were several feet deep.

As the sun rose the next morning, the damage to the runway was apparent and shocking. Aerial photographs of the mutilated runway were quickly disseminated on the internet. Among the first to see the damage was a pilot who had planned to land at Meigs but had to divert elsewhere, reporting to a surprised air traffic controller that the runway was no more.

One of the controllers who worked in the tower at Meigs later told the Chicago media he learned he was out of a job while driving into work and heard a local radio station reporting on the damaged runway.

There was outrage from the aviation community. “The Midnight Raid,” as it came to be known, occurred during Sun ’n Fun, the second largest fly-in held in the United States. Visitors to the event discussed the destruction of Meigs as one would discuss the death of a friend.

The morning after the closure, Daley held a news conference, during which he claimed the runway was destroyed in the name of security, alleging that aircraft could be launched from Meigs Field and used as weapons to attack downtown Chicago, similar to the attack on the World Trade Center on September 11.

The story quickly fell apart when the Department of Homeland Security stated that the airport’s proximity to downtown Chicago was not viewed as a risk and that no threats had been made against the Windy City.

Daley later changed his story, stating to several media outlets that the abrupt closure was done to prevent lengthy and costly litigation as various entities fought to keep the airport open.

The destruction was a surprise to many pilots, especially the owners of the 16 aircraft parked at the airport. Several weeks later, the FAA gave permission for the aircraft to depart Meigs using the taxiway as a runway.

Condemnation of The Midnight Raid was swift and vocal.

Aviation advocacy groups, including the Aircraft Owners and Pilots Association (AOPA) and the Experimental Aircraft Association (EAA), were quick to speak out against the airport’s destruction.

Phil Boyer, AOPA’s president at the time, called out Daley for what he called a lack of honor, noting, “The sneaky way he did this shows that he knows it was wrong.”

EAA president Tom Poberezny was attending the Sun ’n Fun Fly-in at Lakeland, Florida, when he heard about Meigs Field. He decried Daley’s actions, and within two weeks, became part of a general aviation coalition that lobbied the U.S. Senate to support the National Aviation Capacity Expansion Act, which called for the codifying of the historical political agreement between Illinois Governor George Ryan and Chicago Mayor Richard Daley to preserve Meigs Field for another 25 years.

For several months, pilot organizations and aviation groups lobbied for the repair of the runway and the reopening of Meigs Field.

The Midnight Raid was still a topic of discussion that summer when a pilot, on his way to AirVenture in Oshkosh, experienced a mechanical issue and made an emergency landing at the defunct airport. After repairs were made to the aircraft, the pilot continued to Oshkosh, where he addressed the media, saying he was glad what was left of the airport was still intact because it gave him a place to land without endangering persons or property on the surface.

Daley suggested that the pilot made the landing intentionally to embarrass him.

By August of 2003, the demolition of what remained of Meigs Field began. Within a few months, the once-vibrant reliever field was gone and replaced with grass and walking paths.

In 2005, the FAA fined Chicago $33,000 for closing an airport with a chartered instrument approach without giving the required 30-day notice. At the time, the maximum fine the FAA could levy by law was $1,100 per day. The city of Chicago appealed the fine, and legal fists flew back and forth for several months.

Aviation advocacy groups and elected representatives were quick to note the amount of the $33,000 fine would not be much of a deterrent for a municipality that wanted to close the local airport.

As a result, the Meigs Legacy Provision was passed as part of the FAA reauthorization bill. The provision increased the maximum fine per day from $1,100 to $10,000 per day for illegal airport closures.

In September 2006, the city of Chicago dropped all legal appeals and agreed to pay the fine of $33,000 as to repay the FAA for the $1 million of FAA Airport Improvement Program funds that were used to demolish the airport and build Northerly Island Park.

Today, Meigs Field is a warning when other airports are threatened. The message is clear: It could happen here.

In the 2005 documentary One-Six Right, which tells the story of Van Nuys Airport (KVNY) in Southern California, Phil Boyer warns viewers that all airports could go the way of Meigs Field.

“For 25 years, it was the little airport that could,” he states, “and now it is lost forever.”

For many years, Meigs Field was the default airport in Microsoft Flight Simulator. When you opened up the game, you found yourself on the runway with the Chicago skyline in the distance. Today, if you virtually overfly what was Meigs Field, you will find yourself flying over a park.