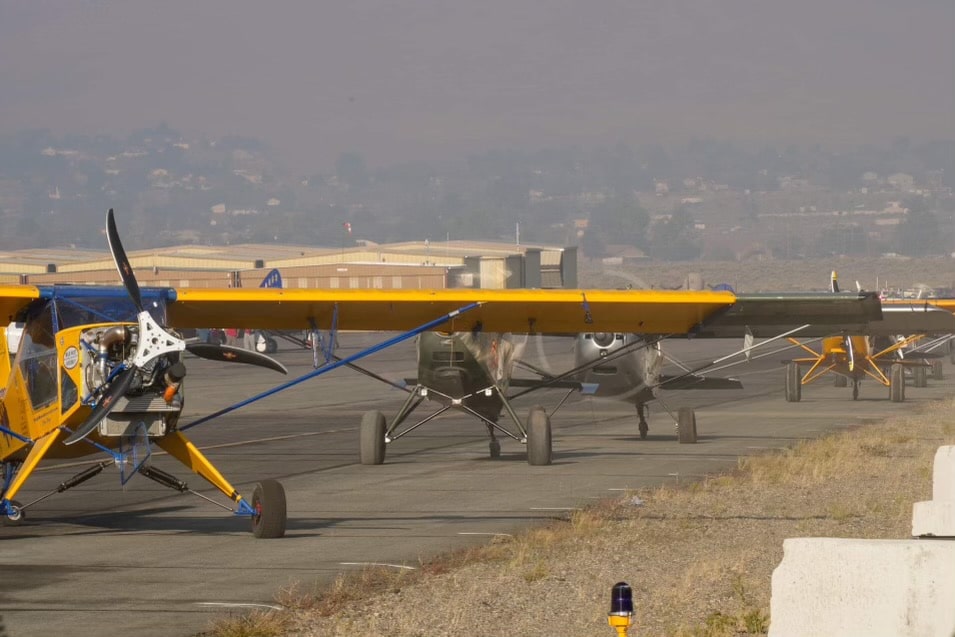 With beautiful weather but varying poor air quality and visibility from a nearby forest fire in California—which is typical this time of year—the STOL Drag National Championship at the Stihl National Championship Air Races at Reno brought competitors in from across the U.S. last week. The STOL Drag competition was once again a welcome addition to the schedule of race classes sponsored by the Reno Air Racing Association, as its versatility allowed it to move to the forefront of the show at a moment’s notice to entertain the crowd when the visibility was reduced below allowable race limits for pylon racing. STOL Drag’s visibility requirements were also reduced by the RVR (runway visual range) from 3 miles to 1 mile, which is well within the safety parameters for STOL Drag—allowing pilots to take the field in front of the grandstands and do what they do best: captivate the crowd.

I took the microphone—a breather from my duties as crew chief for Steve Henry—with Juan Brown (from the @blancolirio channel on YouTube). The grandstand fans and live streamers received the play by play as the Straight and Level Television documentary film crew followed along to help tell the story of the fastest growing segment of general aviation.

Pilots lined up on the recently graded dirt track going head-to-head down the 2,000-foot course after the famous “3-2-1, See ya!” signal given by Kevin Quinn to launch their aircraft toward the turn-around point. Several pilots quickly learned that at Reno’s altitude of 5,050 feet msl, their aircraft were not performing as well as they would have liked and this—coupled with a density altitude) of 6,500 feet—meant that much more ground distance was used up before they typically lifted their wheels from the ground.

In some cases, the taxiway that crossed the track had to be used for a launching ramp to get into ground effect as the heavier Cessna 182s and lower-powered light aircraft were eating up much more ground than they were used to. Many pilots were making adjustments to their aircraft to try and compensate.

Kevin Quinn launched the race with a trademark “3-2-1 See Ya!” [Credit: Cam Walton]

The 2021 reigning champion Toby Ashley did not show this year, robbing Steve Henry (his toughest rival last year) of the chance to demonstrate his upgrades against Sarge.

Psycho Billy will definitely be an airplane to watch at the upcoming STOL Drag World Championships during the High Sierra Fly-in at the Dead Cow Dry Lake in October.

Psycho Billy will be a contender to watch in STOL Drag competitions to come. [Credit: Bryan Weathers]

Another new aircraft on the scene was #85 LunaC—or Luna for short—another custom CubCrafters Carbon Cub built and flown by Cathy Page. She was still learning its intimate flight characteristics, which are vastly different from the Piper Clipper she flew last year.

A Section three crowd favorite was #66 Big Tuna, the Zenith 701 STOL flown by Jon Hakala at Reno for various reasons. The  #221 of Brian Steck, a beautifully painted and meticulously polished Legend Cub, got a taste of the desert when a fist-sized rock was kicked up by his tires and sent through his elevator, which was quickly (albeit temporarily) repaired.

A great time was had by all as the STOL Drag racers were the first class to qualify and race in the mornings throughout the week. This was fantastic, allowing for the tailwheel aircraft not to have to fly with a tailwind in either direction for their runs. However, the sun in the morning shone directly in the eyes of the pilots on the first half of the run, making it difficult to judge the line they had to land across, causing more scratches than at any previous event. But, that’s racing!

The morning sun shone in the racers’ eyes for half of the course, but all managed the glare through the dust. [Credit: Bryan Weathers]

In the end, Steve Henry’s turbocharged Yamaha engine on the Wild West/Just Aircraft Highlander—#44, Yee-Haw—was the airplane to beat, with its screaming 10,000-plus rpm echoing throughout the stands and hangars at the far end of the field. The noise drew people to watch this most unusual-sounding aircraft.

The slogan of “under a minute to win it” proved true, as 59 seconds was the time to beat at this altitude. Steve broke the minute time solidifying him as the 2022 National STOL Drag Gold Champion at Reno. Congratulations to all.