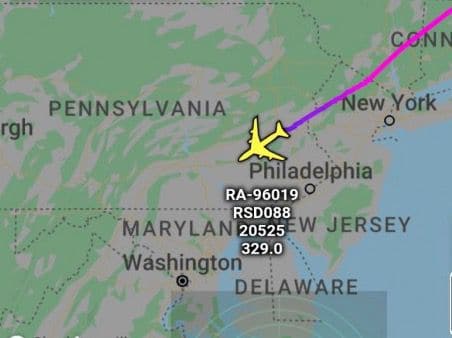 A Russian state-owned aircraft flew right through some of the U.S.’s busiest airspace to mop up some geopolitical business on the weekend. The Il-76 flew direct from St. Petersburg on Saturday to Dulles to pick up diplomats the State Department says are actually spies. On Sunday, FlightAware says an A320 using the same flight number (RSD88) was used to go from Dulles to JFK. The flight number then got assigned to an Il-76 apparently after retrieving Russian representatives to the United Nations. The Il-76 then took a circuitous route avoiding Canadian and European airspace on a long flight to Moscow. It was due to land in Moscow around noon local time on Monday. The aircraft was described on FlightAware as being from the Special Flight Detachment Rossiya.

Meanwhile Russia has effectively banned domestic airlines from flying international routes to prevent airliner leasing companies from seizing their aircraft. The lone exception is Aeroflot’s four-a-day flights to Minsk in Belarus, which Russia is using as a staging ground for its attacks on Ukraine. Earlier this week, leasing companies, most of which are based in Ireland, announced they were severing ties with Russian airlines as part of the broad sweep of economic sanctions being levelled at the Putin regime. Russia’s aviation authorities immediately “recommended” its airlines stop serving other countries.