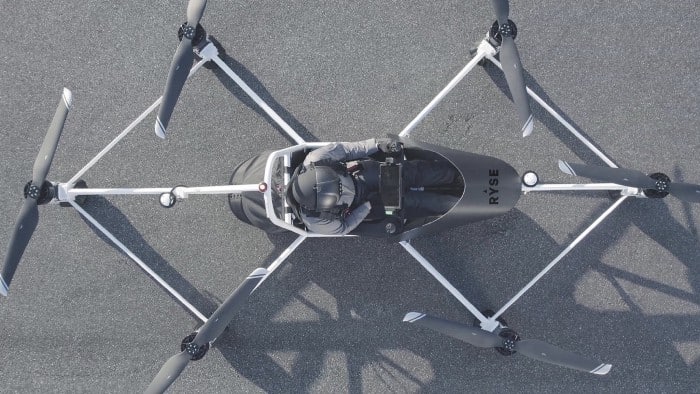 RYSE Aero Technologies said it has begun taking reservations for prospective buyers of its RECON ultralight eVTOL vehicle, which is aimed at farmers, ranchers, and other customers operating on large properties and in agricultural settings.

The Mason, Ohio, company said the single-seat aircraft uses six motors and automated flight systems that allow it to operate much like the small, radio-controlled UAVs that are familiar to consumers. Essentially, the craft maintains stability while the operator steers. Designed for simplicity, the aircraft uses battery packs that are easy to remove and recharge, like those used on electric lawn mowers, RYSE said.

The RECON will operate as an ultralight aircraft under Part 103 of the FAA regulations, the company said, adding that while users will require training to fly the vehicle, they will not need a pilot certificate. As an ultralight, the RECON also has the opportunity to enter the market sooner than larger, more complex eVTOLs that will require certification under standards the FAA is still developing.

RYSE said the RECON has a range of 25 statute miles and a top speed of 63 mph, which is slightly below the 55-knot limit set by regulations. Ultralight rules also forbid flying in controlled airspace, or over congested areas or open assemblies of people, so customers looking for a suburban commuter vehicle will have to wait for certified eVTOLs to become available.

“We have received countless requests from enthusiasts and agricultural buyers to purchase a RECON,” said Mick Kowitz, CEO of RYSE Aero Technologies. “We want to begin the purchase process by allowing future buyers to secure a position in line now, so when we begin production manufacturing, everyone can know what and when to expect delivery.”

The company said its reservation system lets customers claim what it calls an “assembly position” for a RECON and gives them a way to determine the date, time, and location of delivery. RYSE also said the initial round of manufacturing “will prioritize reservations for properties such as farms, ranches, and vineyards first, and then later accommodate reservations for more general property owners.”

RYSE said the reservation plan will allow it “to better manage the supply chain and more effectively meet customer needs.” The company said it expects to begin deliveries late this year.