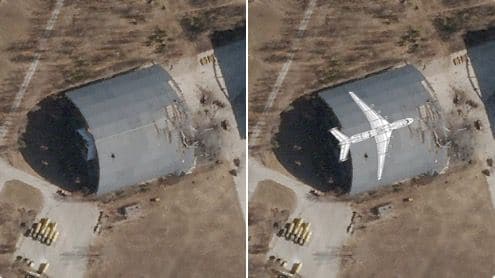 Some satellite imagery sleuthing by an expert in the field suggests there might be something, maybe even quite a lot, left of the AN-225 Mriya cargo aircraft reportedly destroyed in Ukraine last week. Paul Byrne, an associate professor of Earth and Planetary Science at Washington University in St. Louis, tweeted some recent satellite pictures of the hangar that houses the giant one-of-a-kind aircraft at Gostomel Airport in northern Ukraine. They show much less devastation than earlier views indicated. He took the liberty of superimposing the planform of Mriya on the fire-damaged hangar and says it may not be as bad as we first thought.

“Don’t count the #An225 out just yet—I’ve superposed this drawing onto what seems to be the jet’s exposed tailplane, seen in this image posted earlier by @CSBiggers,” he tweeted on Monday.  “Although there’s substantial damage to the hangar, most of the airframe is under the undamaged section.” The image shows that rather than being consumed by fire, the steel frame open-ended shelter (not an enclosed hangar) suffered damage to just one corner of the structure. Presumably, if the aircraft itself had caught fire, the structure over it would have shown damage.  “Of course, we won’t know until photos from ground level turn up—and even if the airframe escaped the worst of the damage it’s still entirely possible it’s no longer airworthy,” he tweeted. “But it’s also possible most of the aircraft, at least structurally, is undamaged. At least, I hope so.”