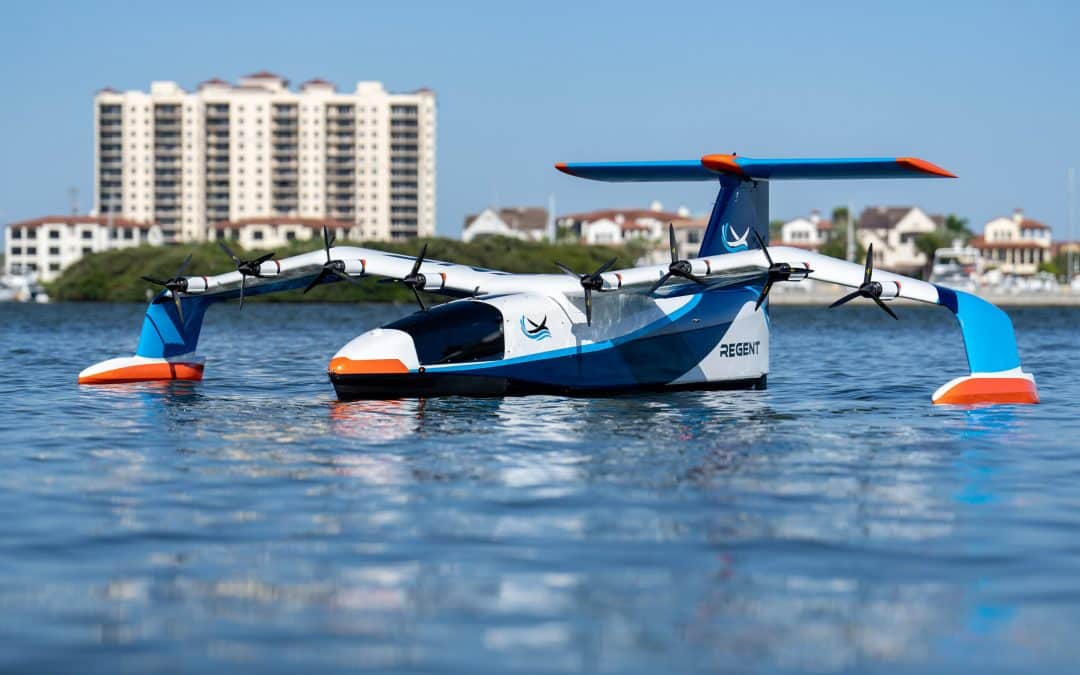 Regent Craft Inc. says it recently completed a series of test flights with its seaglider technology demonstrator. The electric-powered, radio-controlled craft with an 18-foot wingspan is a quarter-scale model of a full-size, passenger-carrying prototype that is in the works. It made the flights over Narragansett Bay in Rhode Island.

The seaglider, also known as a WIG, or wing-in-ground-effect vehicle, resembles a seaplane but flies close to the surface in ground effect, which allows it to remain airborne while using less energy than it would flying at higher altitudes.

Regent plans to develop and build passenger-carrying seagliders that will be ready to enter service on coastal routes between major cities around the world by 2025.

“This is the next great moment in the history of human transportation,” says Billy Thalheimer, the company’s CEO and co-founder. ”There has not been a new mode of transportation since the helicopter. Seagliders will bring welcome relief for travelers seeking an alternative to traditional air travel servicing coastal communities such as New York City, the Hawaiian Islands, Barcelona, Tokyo, and many more worldwide.”

A seaglider operates in three modes, starting out by floating away from the dock, like a boat, before gaining speed and rising onto a hydrofoil. Once the vehicle reaches open water, it accelerates, retracts the foil, and begins to fly at a height within a wingspan of the water.

For many pilots, ground-effect flying is familiar. We experience it when landing with excess airspeed, which causes the airplane to fly farther down the runway before settling onto its wheels. In some cases, flying in ground effect leads to a go-around or a runway overrun.

During the Cold War, military forces in the former Soviet Union tested a number of large wing-in- ground-effect vehicles designed to carry troops and cargo. They never caught on, in part because they were difficult to fly. Imagine controlling an aircraft in a constant state of almost landing, during missions that could last hours.

Regent says it has overcome this problem and many others that plagued earlier WIG vehicles by using the latest technology. “Driving a seaglider is enabled by coupling advanced digital flight software with simple boat controls,” the company says.

“People have been attempting to make wing-in-ground effect vehicles viable for 60 years, and in 15 months, we have gone from a drawing on a napkin to the first successful flight,” says Mike Klinker, Regent’s CTO and co-founder.

Regent says the flights of its demonstrator model marked the final step in proving the seaglider’s feasibility. Now, the company says it is focused on developing its full-scale prototype and preparing it for sea trials, set to begin in 2024.