Seeing Possibility in the Impossible 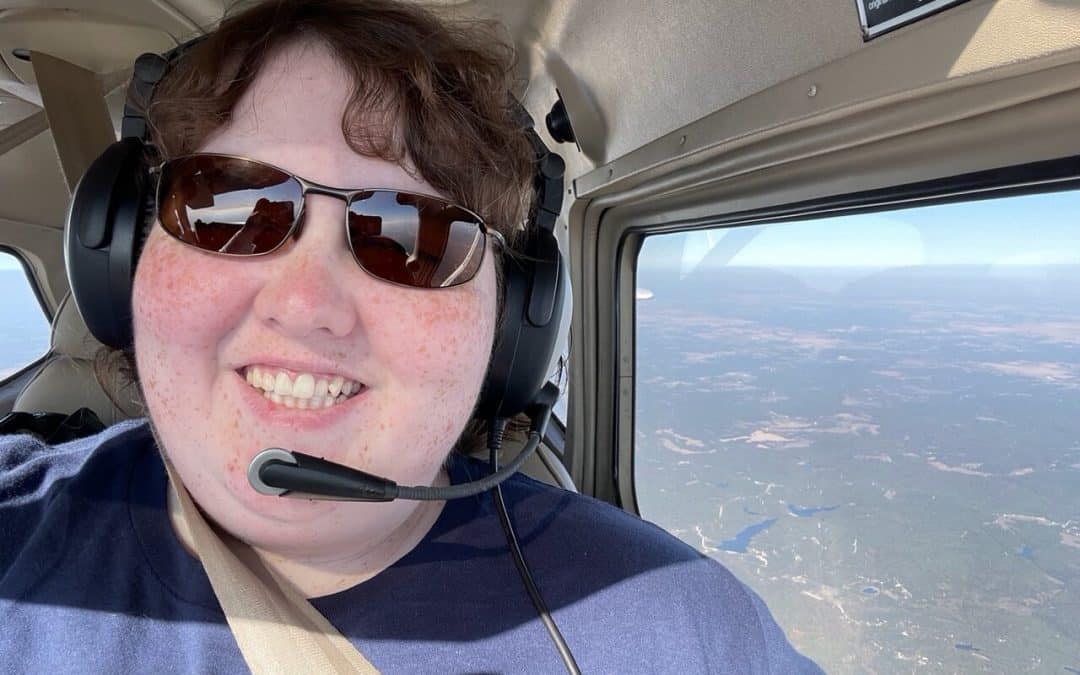 As a member of the disability community, I have seen friends with disabilities adapt in various ways. It has become our way of life to persevere and always find a way.

At the beginning of my flight training, I met Stephen Hopson, who was, at that time, the first deaf pilot to get an IFR rating. He explained how he conducts radio calls—someone else in the cockpit jots down the radio calls on a whiteboard, which he reads and responds to. The example of adaptation inspired me, and it encouraged me when I began my journey of finding a way to fly an airplane without arms.

In October of last year, Kaiya Armstrong, a 22-year-old woman who is legally blind, flew a Cessna from Scottsdale, Arizona, to Washington, D.C. So, did you think I learned about that piece of news and then went on about my day like nothing happened? I had been dying to meet her ever since!

I finally got my wish when she agreed to talk to me over the phone and let me share her story from my point of view. We will also meet in person at the Buckeye Air Fair next month.

Kaiya lost her sight at the age of 14. Developing a disability is almost always a more significant challenge than being born with one, and I can only imagine the obstacles Kaiya faced.

For example, I was born without arms. I don’t know what it feels like to hold my fingers to the home keys of a keyboard because I’ve always done it with my feet. The keyboard lacks the ergonomics for toes, but I can type 25 words per minute, and it’s entirely normal for me. Relearning a skill like typing after losing both hands would be a different challenge.

One day she sat down with her mom and listed off all the things she could not do because she was now blind. She wanted to do go-cart driving with her brother but found out she needed a driver’s license, and she didn’t have one. After that, she added driving and flying to her list of can-nots.

Life is funny in that just as suddenly as it brings a deviation to the flight plan, it also throws us beautiful surprises. Right around that time, an Arizona-based foundation sent out a notice of a sponsorship for someone to learn how to fly and ultimately make a cross-country flight to Washington, D.C.

Guess what the primary qualification was? That someone had to be blind!

The sponsoring organization was the Foundation for Blind Children, which does groundbreaking work in helping the visually-impaired navigate life without full sight. With Kaiya, they have momentously added flying to the realm of possibilities for the blind.

Kaiya worked hard through 8 months of ground school and flight training. She figured out ways to adapt to the uniqueness of her situation. An example is how she and her instructor converted the big cockpit poster into braille so she could memorize it like the other flight students.

The most obvious question is, how does she do the actual flying? I found out that she has a co-pilot who obtains the visual cues and gives them to her verbally. She then adjusts the yoke right or left.

The flight itself took 35 hours over five days. When I asked Kaiya if she was nervous, she said yes, not because of the flying but because it was her first time away from her family. I forgot how young she is! Her grandma called her halfway along the trip to ask if she had already googled her name because news of her flight was all over the internet.

She admits that while the actual flying was the best part of the trip, meeting people along the way was a definite highlight. In her own words, she was proud “to bring awareness to the fact that the only limits we have are the ones we give ourselves. There will always be adaptations. Things are always going to evolve and progress.”

When news of her story broke out, there were online comments suggesting the story was false. After all, how could a person without sight complete a feat where the number one requirement was the ability to see? As it turns out, she had the one thing necessary—the ability to see possibility in the impossible. That is true vision, and we could all use more of it.

I look forward to sharing more stories with you. If you have suggestions for article topics or questions you’d like me to answer, send me an email at thearmlesspilot@gmail.com or visit www.JessicaCox.com.

The post Seeing Possibility in the Impossible appeared first on FLYING Magazine.