She Runs a Crop-Dusting Business 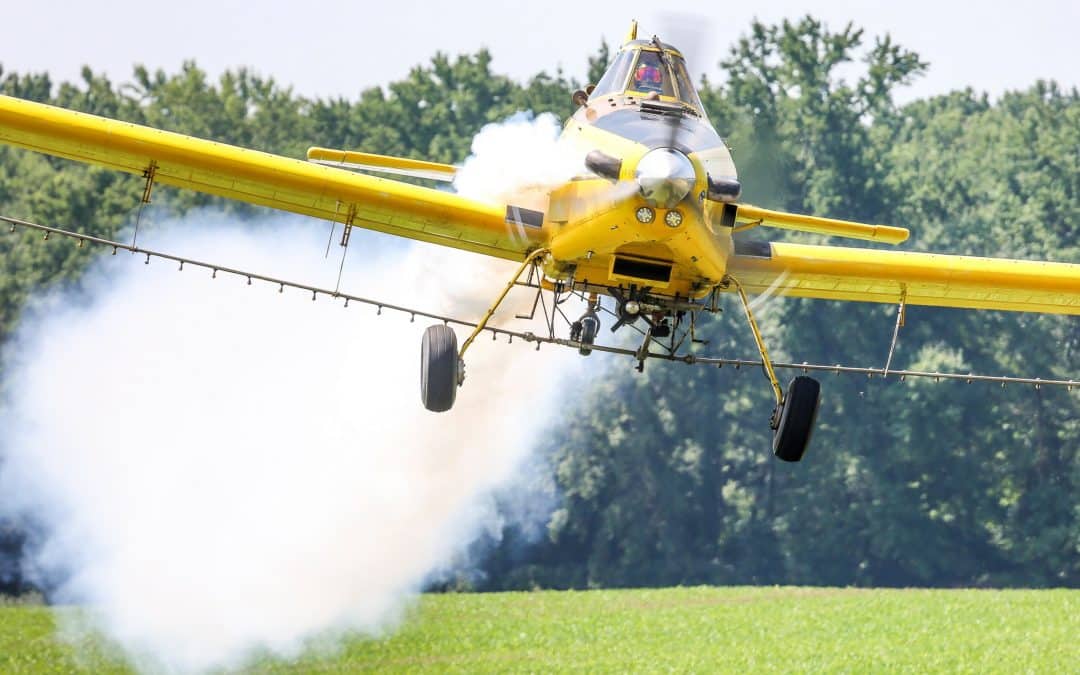 Becoming an agricultural pilot wasn’t something Emily Daniel envisioned for herself. As she tells it, she always wanted to be a meteorologist—even today, as she and her husband, Austin, run Wings Aerial Applicators, a crop-dusting business based in New Jersey—so this wasn’t part of the script, or was it?

“Long story short, I’m a third-generation pilot, and my grandfather was actually a crop duster,” Daniel tells FLYING from her office in New Jersey. At the time, she says they’re harvesting cranberries, and she’s waiting for the next available dump truck, so she has an hour to talk. Speaking of her familial history, aviation has always been in her bloodline. In his time, her grandfather used Piper J-3 Cubs and Boeing Stearman biplanes.

“He bought a brand-new Piper PA-25 Pawnee back when you could buy them new,” Daniel explains proudly. So, her grandfather taught his kids to fly, and though her father didn’t go into the family business, he at least began teaching Emily to fly when she was 14. So, fate would have it that growing up in New Jersey, there was only one other large crop-dusting business in town, and she took a job there.

New pilots usually start out in the Piper Pawnee before working their way up. [Courtesy: Emily Daniel]

“I was working there and didn’t really think I liked it. Then once I saw it, I fell in love with the work,” she says. “So, I had the ratings and just worked my way into the airplane.”

That’s where she also met her husband, Austin. Together they purchased his family’s nearly two-decade-old business, which consists of a crop dusting operation, and a cranberry farm.

“Austin’s dad started the farm, and he and I took it over a few years ago. We’ve been trying to grow everything, so it’s been a wild ride.”

For the Daniel, it’s a big and complex business. They have four aircraft: a Weatherly 620B, an Air Tractor AT-400, an Air Tractor AT-502, and a Piper Pawnee PA-25-235. Daniel says she’s been crop-dusting for the last five seasons. They used to have time in the off-season to “just kind of hang out,” she says, “right now our business is slowly becoming fully all-year round.”

The Weatherly 620B has a Pratt & Whitney R985 engine. Here, it is set up for a dry application, as seen by the spreader mounted below the airplane. The material flows down from the hopper, and RAM air pushes the air through the vanes in the spreader so the seed or fertilizer can spread out before it reaches the ground. The general application height for this is between 60-100 feet. The pilot controls the hopper gate opening inside the cockpit to obtain the proper rate of application. Dry applications can range from 4 pounds of product per acre up to 250 pounds of product per acre. [Courtesy: Emily Daniel]

The spraying season includes spraying crops with crop protection products—insecticides, herbicides, pesticides, fertilizers—and planting various seeds between April and November. In October and November, her farm harvests cranberries, and they consolidate much of the heavy aircraft maintenance in the winter.

“We tear all the airplanes apart,” Daniel says.

There are also state contracts to prevent or reduce the spread of mosquitoes, which has been an extended part of that industry since the early days.

Daniel flies this Air Tractor 502, which has a PT6-34 engine. [Courtesy: Emily Daniel]

Daniel says she flies the Air Tractor 502, one of the more prominent purpose-built crop-dusting aircraft. There are also the Thrush series by Thrush Aircraft and the Grumman Ag Cat, following the Grumman naming tradition of using the ‘cat’ suffix in aircraft names.

She explains that the industry has made a concerted effort to reshape its public image to reflect more accurately the sophistication of the aerial agriculture business and its tools of the trade. For instance, it’s no longer called crop-dusting. Instead, the more appropriate label is “aerial application,” and pilots are “aerial applicators.”

“A lot of people get into aerial application thinking it’s just really cool flying, but it’s so much more than that,” Daniel says. “We’re applicators first—whether or not I’m in an airplane or on the ground, the airplane is just a vessel for application.”

That’s important to note because, in addition to being a competent pilot, aerial applicators need to take a battery of tests to earn certifications to spray chemicals like pesticides. These certifications are state-specific, though there is some crossover. They also have to meet the requirements of Part 137, which allows for low-level aviation operations.

Plus, Daniel says, they need to study the crops for their differences.

“A lot of people don’t realize you have to know these things before you can just hop in a plane. For example, you need to know the difference between beans and hay so that you don’t put the wrong product on the field, and it’s hard for people that don’t come from an agricultural background.”

The Pathway for Pilots

To be an aerial applicator, you only need a commercial license, and there’s no check ride. Operators put pilots through graduate training that allows them to work their way up the smaller piston aircraft before attending turbine transition school. It includes studying various systems, time in a simulator, and some flight familiarization training that consists of the standard stalls, takeoffs, landings, and emergencies. Despite the fact the industry has been seen as a time-building job, for those who want to make it a career, the opportunity is there, especially since businesses are willing to invest in their pilots, she says.

Daniel says this Air Tractor simulator, located at the University of Nebraska in North Platte, is used in annual safety procedure training and for turbine transition courses. [Courtesy: Emily Daniel]

“It used to be kind of a time-building job but has shifted to a career. I can tell you from the owner’s side, it’s an investment in every pilot I put in the airplane, from the cost of training to insurance,” which Daniel says can be tens of thousands of dollars.

As for the association that represents the industry, the National Agricultural Aviation Association (NAAA) has been around since 1966 and represents close to 1,900 members in 46 states. Its duty includes representing the interests of small business owners and pilots in that industry. According to the association, these include “professional commercial aerial applicators who use aircraft to enhance food, fiber and bio-energy production, protect forestry and control health-threatening pests.”

Aerial applicators have to watch out for obstacles such as wind turbines. [Courtesy: Emily Daniel]

Is crop dusting under threat from new technology? Daniels says, not likely, and puts it into perspective. According to the U.S. Department of Agriculture, as of February 2022, there is a total of 895.3 million acres of farmland across the country. The average farm size is only 445 acres. Of that, 347 million acres are used for crop production.

“Aerial application, running at full speed, only treats a fraction of that,” Daniel says. She’s right. According to the 2019 NAAA Industry Survey, the industry only treats about 127 million acres annually, so there’s a long way to go. The survey also shows the technological strides being made to improve safety. These include GPS swath guidance systems, onboard weather measurement systems, STCs [supplemental type certificates] for night vision goggles, and more.

As for Daniel, who says she never thought she’d work as a pilot when she was younger, her skills as a crop duster may open up new opportunities. .”I think I would like to do some fire-bombing in the future. The firefighting industry is quite a bit different. You do have to attend the ground school and take a check ride. I’m halfway there.”

The post She Runs a Crop-Dusting Business appeared first on FLYING Magazine.