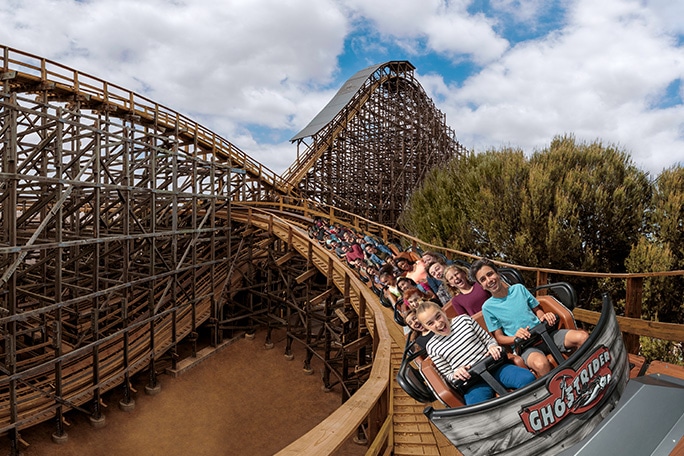 One of the many benefits of the vast, fairly dense network of general aviation airports in the U.S. is that there is probably a runway near just about any attraction you want to visit. This certainly is the case with amusement parks, many of which are just opening for the 2022 summer season.

As a child, I loved going to amusement parks, especially those with the latest, most thrilling roller coasters. The 80s was a period of renaissance for looping coasters, and my middle school friends and I, finally tall enough to ride without our parents, wanted to visit every park that had one.

Years later—as a student pilot—I got a better sense of just how many amusement parks there are in the Northeast. They are easier to spot from the air than from the ground, and the tops of coaster hills and Ferris wheels make great landmarks for navigation (pilotage was a big thing at the time—and should remain a primary source of navigation). On several occasions, their bright, swirling lights have guided me during cross-country flights at night.

You will have an easy time navigating to the parks in our list below, which are accessible via nearby airports ranging from turf strips to international hubs.

The biggie—this park advertises 70 rides with 17 roller coasters among them. Just hearing the names of the coasters might give some folks second thoughts. They include the Blue Streak, Corkscrew, GateKeeper, Gemini, Iron Dragon, Magnum XL-200, Maverick, Millennium Force, Pipe Scream,, and Raptor, to name a few. The park’s alpha ride, though, has to be Steel Vengeance, known as a “hyper hybrid,” which claims to give riders the most airtime of any coaster. I’m sure other parks might dispute that, so you might have to visit them as well.

This park really did begin as a berry farm in the 1920s and gradually grew, adding attractions until it became a major attraction by the 1960s. Today, the park includes Wild West and Ghost Town themes, the Knott’s Soak City Waterpark, and a range of rides including a classic wooden coaster called GhostRider. Fullerton Airport’s history goes back to 1913, when barnstormers used the area as a landing field, but it didn’t become an official airport until 1927. Hughes Aircraft operated there for decades before shutting down in the 1990s.

Yes, we have a place in our hearts for wooden roller coasters, where the sometimes rickety appearance and creakiness of the structures makes up for thrills that might be lost without their lower speeds, as compared with modern steel coasters. This park’s Lagoon Roller Coaster is more than 100 years old. The park rebuilt it after it was damaged by fire in the 1950s and numerous parts have been rebuilt since then. A hanging-style coaster called the Bat is available for steel fans who want a more modern experience, but at 45 mph, the Lagoon Coaster is faster and probably a bit scarier.

This place is all about the coasters, including Batman: The Ride, with its rapid twists and multiple inverions, the looping El Diablo and Judge Roy Scream, a classic wooden coaster. And let’s not forget the king: the New Texas Giant, an enormous, 65 mph hybrid coaster—that means it is made of wood and steel, or what the park calls “the best of all worlds.” The ride’s track is nearly a mile long, supporting the notion that everything is big in Texas.

This park’s Kentucky Flyer wooden coaster has an aviation theme that includes “12 turbulent airtime moments.” There is also the steel Storm Chaser, the super-tall T3 (“take terror to the third power”) and Thunder Run, a recently refurbished wooden coaster with almost 3,000 feet of track and camelback hills that provide “negative air time.” This park has the closest airport of the group. Louisville International is less than two miles away.

While flying around the traffic pattern at Queen City in the dark, logging the night time takeoffs and landings necessary for my private pilot certificate, I recognized the lights of Dorney Park, which is known for its aquatic attractions but is also home to a bunch of great rides. One of those is the Thunderhawk, a tightly wound wooden roller coaster that has been operating since 1923, with renovations, expansions, and upgrades. If its 45 mph top speed isn’t enough, there is the Steel Force, a 75 mph coaster built in 1997.