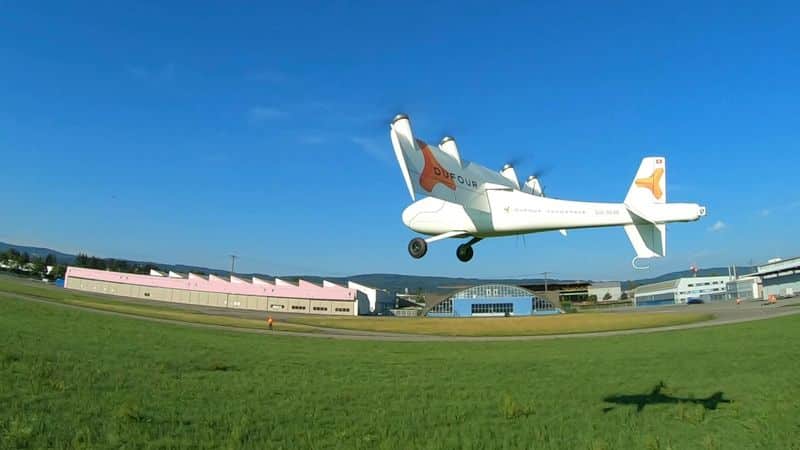 Spright, the drone division of helicopter services company Air Methods, and Swiss eVTOL developer Dufour Aerospace, announced an agreement under which Spright will buy 40 of Dufour’s Aero2 tilt-wing aircraft, now under development, with an option to purchase 100 more.

The companies did not disclose terms of the purchase, development, and service agreement but said it “represents a multimillion-dollar purchase, one of the largest civilian unmanned aerial vehicle purchases in the U.S. market to date.”

Under the agreement, Spright and Dufour will work in a multi-year partnership in which Spright will assist Dufour with testing, certification, and production of its aircraft. Spright will also become Dufour’s exclusive service, maintenance, and training partner for the Aero2 in North America. Spright will use the Aero2 aircraft mainly for delivering medical supplies over medium and long distances, the companies said.

The companies said the Aero2 will enhance Spright’s ability “to serve the healthcare community by carrying heavier payload over longer distances. This translates to more patient samples, larger tissue specimens and organs, and heavier supplies and equipment being transported with the on-demand speed and efficiency that is unique to drone delivery,” the companies said.

Dufour is developing the Aero2 for unmanned, remotely piloted flight, while another model, the Aero3, is a manned, eight-seater designed for air-ambulance and other emergency medical missions. Each uses motors mounted on a tilting wing that combine “the best of helicopters and airplanes: vertical take-off and landing on even the smallest spots and energy-efficient longer-range flight at high speeds.”

The Aero2’s tilt-wing design, with motors and propellers mounted in nacelles on the wing’s leading edge, gives it the look of a traditional airplane and theoretically allows higher speeds in forward flight compared with other eVTOL designs.

“Dufour Aerospace has developed an impressive Swiss Army Knife for unmanned air mobility that will meet our anticipated future needs. With today’s announcement, we demonstrate our commitment to their vision and to their technological approach, in which we are proud to be the first operator in the U.S.,” said Joseph Resnik, Spright president.

“Our partnership, which extends far beyond unit sales of Aero2, is a significant milestone for us in our development of tilt-wing, unmanned and manned products for advanced air mobility. Spright’s commitment shows that there is great market potential for Aero2 for safe and efficient medium and long-range operations with unmanned aerial vehicles,” said Dufour CEO Thomas Pfammatter.

Flight testing of the Aero2 is underway in Zurich, Switzerland.