‘Talk to Me Goose’ 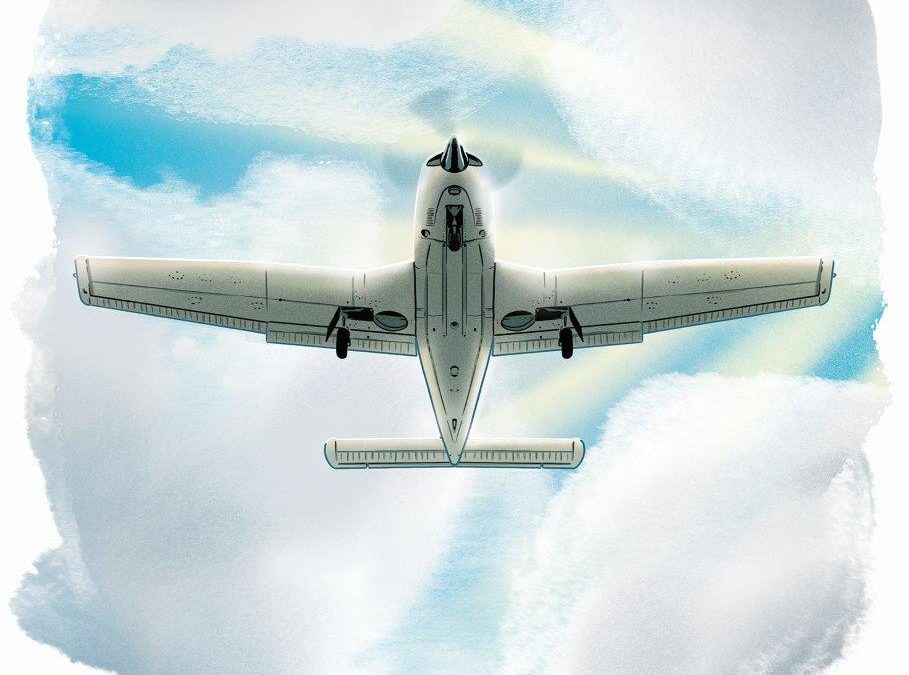 It was the first thing that ran through my mind: “Talk to me, Goose.” But this wasn’t the Hollywood thriller I grew up with—Top Gun—this was a real-life tragedy. I’d just lost my father, and now I had an inflight emergency involving oil fumes in the cockpit and a vibrating engine.

As we taxied out that morning, the tears started down my cheek. With a shaky voice, I asked for—and read back—my clearance. By the time the Piper Arrow reached rotation speed and lifted off the runway, my sobbing convulsions broke squelch and the tears in my eyes made it difficult for me to see. This was my departure from Leesburg International Airport (KLEE) in Florida after spending the last week of my father’s life by his side in the hospital and then in hospice.

We were flying home from central Florida to Virginia that Wednesday with the promise of a slight quartering tailwind. I felt an altitude of 11,500 feet might permit us to make it nonstop, but we’d have to eke out every efficiency possible, including “cutting the corner” off the coast of Georgia. I engaged the autopilot and contacted Orlando Approach.

The next hour was a quiet and somber time. The metaphor of “slipping the surly bonds” and flying amongst the angels was not lost upon me. My mind was entranced thinking about the final days and the final words my father and I were able to exchange, replaying them over and over again as if to record them into my brain, never to be forgotten.

We were navigating direct to STARY, the intersection shortcut of choice for mid-Atlantic pilots making the trek to and from Florida. STARY is situated 13 miles off the coast of Georgia and permits an almost arrow-straight flight back to Virginia. I thought of STARY as a good, incidental omen.

We were just south of Jacksonville, about to go “feetwet,” when the faint odor of oil caught my attention. It’s not an unexpected aroma in a 42-year-old airplane, so I dismissed it and returned to reminisce vivid thoughts of my father. A few minutes later, my wife asked, “Do you smell that?” Snapping out of my stupor, I recognized the smell was getting a bit overwhelming, even for our trusty old bird. I confirmed to her that it was the smell of oil but having already convinced myself that it was normal,I said, “It’s OK, no big deal.”

As we approached STARY, I felt the first shudder. I looked over at my wife, and she was reading her book.About one minute later, it happened again. I looked at the engine monitor and then at her, and found her looking up at me. After the third time, the vibrations didn’t stop. “We might have to land in the water,” I told her. “Your job will be to prop the door open before touchdown.”

I couldn’t believe I had spoken “those words” and—not ever one to be at a loss for them—her silence surprised me. She broke out the rosary beads from her purse and began praying.

I turned 30 degrees left and started making our way towards the angling Georgia coastline. As I looked ahead, I saw nothing but deserted beaches. It turns out, all of what lay ahead was wildlife refuge. Hilton Head was 65 miles beyond, and I thought for a brief moment that it might be nice to become stranded on Hilton Head—but the incessant vibration cut short my daydream.

I suddenly heard my first flight instructor, Jarl, preaching: “The closest airport might be behind you.” With the vast Atlantic Ocean off our right wing, I had only to look over my left shoulder and, as if on cue, there was St. Simons Island (KSSI), about 18 miles distant. It was then that I called JAX Center to report our engine problem. “Roger, 72T, say intentions and number of souls on board?” Wow! I couldn’t believe that I was being asked “that” question.

As I completed the turn towards KSSI, I began to think that this might have a happy ending after all. Descending into thicker air, the normally aspirated engine was able to make more power and consequently vibrated more intensely. I pulled the throttle and prop back in an effort to slow the engine and vibration, thinking that having less power for longer would be better than the engine’s sudden catastrophic loss. Between radio calls to JAX, I joined my wife in reciting the Lord’s Prayer and Hail Marys in alternating fashion. I also began to think of my father, wondering if I’d see him sooner than I had thought I would.

It felt like the next 20 minutes took an hour to pass. Approaching the non towered field, I began making my calls to St. Simon’s traffic 10 miles out. I wanted everyone/any-one to know that I was coming. Once comfortably within gliding distance, I began my circling descent. I continued my slow pull of power, knowing that I could not count on the assurance of adding any power back in.

The landing on Runway 22 was uneventful. After pulling up to the ramp and shutting down, we didn’t know what to expect. Stepping off the wing, we found a puddle of oil already forming under the engine and a long streak of oil from the side of the cowl extending rearward all the way under the pilot’s storm window.

What was it? The No. 1 compression ring from the No.4 cylinder had decided to disintegrate. Miraculously, the ring remained within its channel on the piston. There would have been no telling our fate, had it come loose and been blown down into the crankcase. The ignored oil fumes was my first indication that the crank case was pressurizing and oil was being blown overboard. But I had missed it, too distracted with grief to take the early hint.

The lesson I learned from this incident is that grief can affect your flying skills just like some medicine can—perhaps more so—since it can cloud your judgment more insidiously than the obvious runny nose or sore throat. Flying while in such intense mourning led me to miss the cues that had been talking to me all along.

The post ‘Talk to Me Goose’ appeared first on FLYING Magazine.