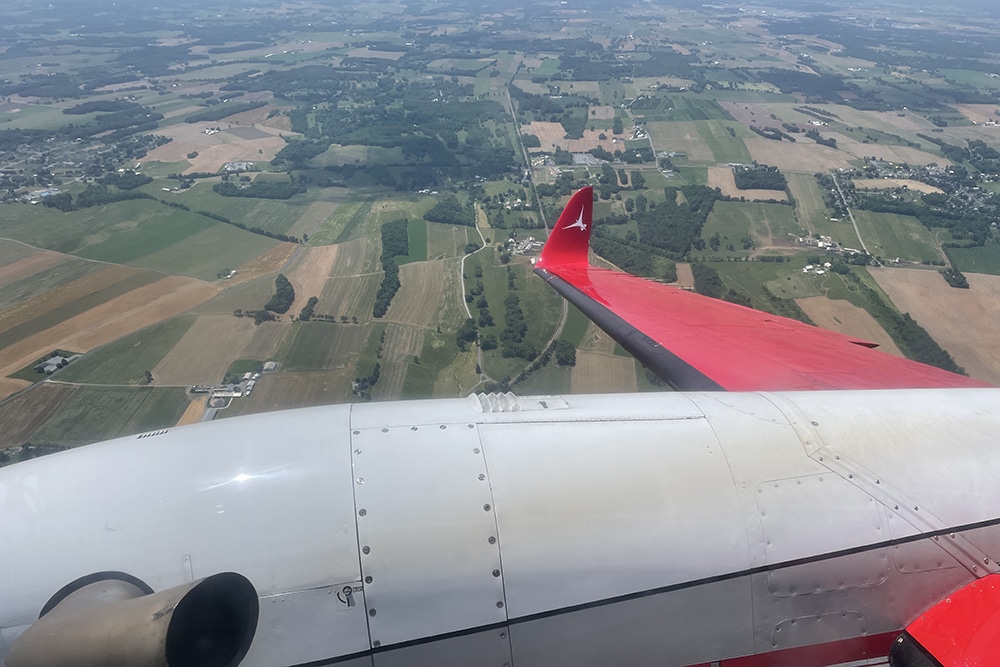 “The robust flight-testing program for the Tamarack Performance SmartWing King Air 350 focused on every aspect of safety and performance to ensure all modified aircraft will have been rigorously tested,” said Nick Guida, CEO and founder of Tamarack.

Flying with the SmartWing

FLYING took advantage of an opportunity to fly with the SmartWing installation on the King Air 350, as a follow on to the demo flight we made in October 2021 on the King Air 200. Tamarack had just finished its test flight series, so I was looking forward to seeing the load alleviation protocol in the stretched twin turboprop, and how it would compare to the 200.

We set a rectangular course west of Hagerstown Regional Airport (KHGR) in Maryland that we use to keep us well clear of the Washington, D.C., metro airspace, and allow us to maneuver with relative freedom. I was also hoping to find turbulent air—counterintuitively—because that’s one condition in which the active winglet technology engages, to mitigate the transitory loads created as the airplane flies through the vertical “gusts” associated with the bumps.

Luckily for us, the wind was blowing enough to practically guarantee we wouldn’t see smooth air until we got to the flight levels—and I watched as the outboard portion of SmartWing’s dual control surfaces tipped up throughout our climb to FL180.

Once level at 18,000 feet and on with Cleveland Approach, we secured dispensation for a set of steep turns, and we purposely put additional load on the wing during the turns by allowing our altitude to wander a bit. Handling characteristics remained smooth throughout the maneuvers.

Tracking back towards Hagerstown, I had a chance to check out slow flight, which on the 350 hovers around 120 to 130 kias. Same smooth-roll control feel, and stability—as much as I could determine from the hour in the air.

On approach back into KHGR, we set up for the ILS Runway 27, and I had the chance to see how the improved low-speed handling translated into our ability to mix in with slower traffic on final—and an easy touchdown. All in all, we saw very similar improvements to the 200 series.

The King Air 350 will join the ranks of Tamarack’s Cessna Citation installations in the next couple of years—the company has nearly 160 active winglet mods made to the 525 model series in the field. Tamarack reports that its fleet has seen a 33 percent improvement in range with the STC—and it is encouraging potential customers in military and special missions operations to get on board with the King Air SmartWing mod.

“Tamarack is offering substantial savings for early investors in the King Air 350 Performance SmartWing,” said Eric Cunningham, sales director for Tamarack Aerospace. “Savvy customers see this unique technology as an ROI purchase that pays for itself after a relatively short time.”

Tamarack offers pre-certification pricing on a limited basis for interested operators looking to secure early production STC orders, according to the company. Certification of the system on the King Air 350 is expected in 18 to 24 months.