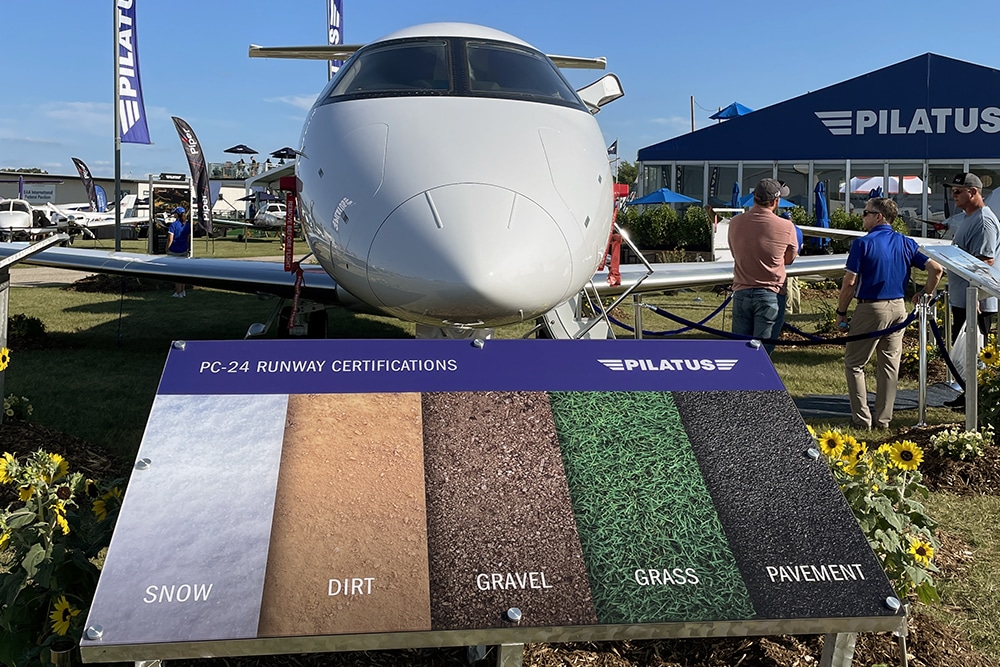 After “The Year Without an Oshkosh” (2020) and the cautious optimism of last year’s show, EAA AirVenture blazed back in, Maverick-style, with renewed energy this week.

Served up with the best weather I’ve seen since 1995 when I first made the journey—after a propelling cold front pushed through a monster storm last Saturday—OSH22 popped with news. Our time reporting on the event began Sunday with preview gatherings at Cirrus (hello, crazy busy) and Redbird (hello, latest sims). Monday was already scheduled back-to-back for our team—and new press conferences mushroomed up throughout the day.

By the time I made it back to our rental house on Lake Winnebago on Wednesday night, I was no longer certain of my ability to form coherent sentences in English. But that was from a landslide of positive news and the excitement of seeing so many beloved members of our aviation family again.

If you judge by the traffic on FLYING’s website, Daher’s Kodiak 900 captured a lot of interest—and the crowds around Van’s Aircraft’s new RV-15 flying prototype surely indicated an appetite for the latest models. Both were significant enough departures from those manufacturer’s current lineups to affirm that the drive towards new products is vital to a company’s long-term success.

But in my one-on-one conversations with leaders at Cirrus, Icon, Tecnam, and others, something else unfolded.

Cirrus unveiled its SR G6 update for 2022 back in January but it represented tweaks on the sixth-generation airplane as opposed to anything earth-shattering. Cirrus’s Todd Simmons, senior vice president of customer experience, talked about the company’s backlog of 24 to 36 months—one of its largest that he could recall. It materialized as Cirrus simply continued to market its current line of aircraft, including the SR20 and SF50 Vision Jet as well.

Most notable? For a company that attracts new entrants to the market as part of its secret sauce, Cirrus has witnessed a steep rise in position holders who are complete newbs to general aviation. Thirty percent of the position holders in that order book have never been a pilot before, said Simmons—double the percentage Cirrus normally sees. Those owners-to-be are working on a private pilot certificate while waiting on their airplane.

Jerry Meyer, CEO of Icon Aircraft, also reported a healthy state of the order book, with an evolution of its original A5 model. They’re booking well into 2023—a good place for the company, according to Meyer. While they wait for certain enabling changes such as the updates to be seen with MOSAIC, they’re introducing options like a new trailer, to make the ownership experience fuller.

Tecnam’s director of sales David Copeland walked me around the latest version of the P2010, the Gran Lusso, and he had me sit inside to get a full taste of the interior refinements made to the four-seat, single-engine piston machine. While it goes for a price similar to that of the Tecnam twin, the P2006T—$626,750—the two stand apart in look and feel. And Copeland says no one believes him when he tells them the airplane can make its maximum speed of 143 ktas on less than 6 gph. I’ll be testing that out for all of us next month when we meet up for a test flight.

Each of these companies came to AirVenture selling iterations on their existing product lines. All three are expanding their manufacturing facilities to accommodate the growth they’ve seen in the last two years.

Legacy OEMs are capitalizing on the moment too. Piper has plans for electrifying its Archer, but it has been successfully adding flight training organizations to its roster with only incremental changes to its products, like the Pilot 100i. The upward trajectory in flight training has worked out well for its tried-and-true design.

One of the greatest “iterators” of all—Textron Aviation and its Cessna and Beechcraft brands—displayed a beautiful, classic Skylane on its Oshkosh line—but it’s still a 182. And it’s selling because you can pay almost as much for a 2010 model as the brand-spanking-new one.

The luxury interior of Tecnam’s Gran Lusso P2010 represents a step up—but not a new model for the manufacturer. [Photo: Julie Boatman]

The drumbeat of the healthy order book continued throughout the flight line, with used aircraft for sale still showing incredible price increases from years past. There’s no doubt this activity in the marketplace makes some turn to a new airplane when they can take advantage of tax incentives, warranty programs, financing, and (let’s face it) the joy of having a new airplane.

Pilots at the show came in a buying mode across the spectrum as well.

Aerox’s Scott Ashton sold out of product in the first half of the week—the company’s portable oxygen systems left the exhibit hangar in the arms of pilots who seemed not to be bothered by any premium cost, according to Ashton. Barry Knuttila, CEO of King Schools, shared that the pilot training company was seeing some of its best months ever—another beneficiary of the increase in student pilots.

By and large, the people who are flying grumble about the cost of avgas, but they’re still flying. At least they flew into Oshkosh this year—aircraft parking went all the way to the southern fence, it seemed, and there were several times during the week when the field closed to additional aircraft. With the weekend left to go, the official AirVenture numbers haven’t been released, but after conversations with EAA folks, I expect them to be as healthy as 2019, at the very least.

People are getting into personal aviation, learning to fly, buying airplanes—but not just the very newest. They’re buying, period, and that bodes well for our industry.

The post The Big Story of #OSH22 appeared first on FLYING Magazine.