‘The Coolest Airport in the Country’ 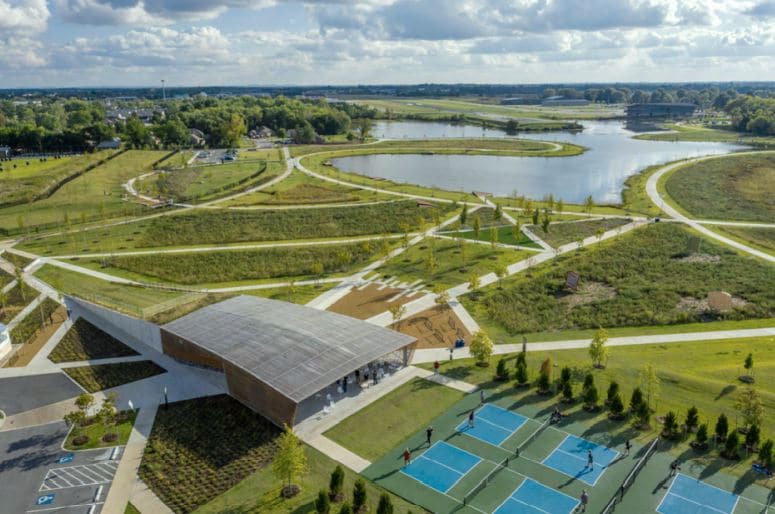 Bentonville Municipal Airport (KVBT) has served local and transient aviators since at least 1946. In recent years, this airport in northwestern Arkansas has been the beneficiary of strategic thought and investment into what was historically a typical general aviation airport. These efforts have enabled the construction of dedicated aerospace-related facilities, while concurrently honoring a local name that’s well known in national aviation circles.

The airport today is predominantly known as “Thaden Field,” named after the pioneering pilot Louise M. Thaden who was born and raised in Bentonville.

While it has been many decades since the gone-west aviator has lived in the town, her and others’ spirit for flying is alive and well at the airport. This enthusiasm is perhaps now more apparent than it has ever been previously.

This contagious passion for aviation, and the manner in which it is enjoyed, leads some to call Thaden Field “the coolest airport in the country.”

An aerial view shows the park area that is adjacent to at Bentonville Municipal Airport, aka “Thaden Field.” [Courtesy: Thaden Field]

Chad Cox, president and executive director of Thaden Fieldhouse, the centerpiece of the airport, provides some insight into why KVBT has gained that distinction among pilots across the country.

“[Reasons why this is the case are] a mixture of an airport being staffed by young pilots excited to grow general aviation, access to exciting and fun businesses nearby, a bustling restaurant…all this adjacent to two public parks.”

Cox also referred to an often-talked-about feature of Thaden Fieldhouse that bridges the old and the new.

“A variety of vintage warbirds, aerobatic planes, bush planes, helicopters and more can be seen in the exhibit hangar,” Cox said. “As a working hangar, located immediately off the runway, there is no set schedule for aircraft being displayed. You just need to keep showing up and get surprised.”

Two P-51 Mustangs a located in The Fieldhouse’s exhibit hangar, which hosts a variety of aircraft. [Courtesy: Thaden Field]

As mentioned, even these show-worthy artifacts often get back into the air, unlike those in many other exhibition settings. Highlighting these still-airworthy aerial treasures to the general public is just one of Thaden Field’s stakeholders’ goals.

Other overarching goals are to support general aviation and allow passionate people the opportunity to use aircraft to best enjoy what Arkansas has to offer.

Located in the middle of the country, the airport naturally serves as a convenient refueling stop for a myriad of aircraft types and origins, as well as their hungry pilots and passengers.

Some other key features of the fieldhouse and surrounding areas, include:

Dedicated playground space for kidsPedal airplanes in the exhibit hangarPickleball courts, an archery range, an indoor climbing range, and a brewery nearbyNo landing or parking fees assessed for piston aircraft

The recent addition of a 600-ft extension of the paved runway allows larger aircraft easy access to the airport and its services. The lighted asphalt runway is now 5,053 ft long (check directory for declared distances) and is oriented north/south. Additionally, there is a 2,448 ft parallel turf runway, which “is perfect for vintage and tailwheel aircraft.”

From KVBT, there are dozens of backcountry strips which allow access to pilots within an 80-nautical-mile radius. These airfields, and others within the state and beyond, can be viewed at the Airfield Guide.

The prevalence of unpaved landing spots and the beauty of the Arkansas backcountry have collectively inspired the Fly Oz initiative.

“Fly Oz is about creating memories that will last a lifetime through unique aviation experiences in the Ozarks,” Cox said. “Northwest Arkansas is home to outdoor recreation of all types and there is no better way to explore its beauty than from the skies.”

For those that need off-airport flying guidance, or assistance scouting nearby places that offer great adventure, enthusiastic help is readily available.

“Backcountry and tailwheel instructors are available to train pilots on the many grass airstrips of the Fly Oz network,” Cox said.

The city of Bentonville, population of about 50,000, is known for many other reasons other than the home of Walmart. It is home to a number of world-class attractions, well-reviewed restaurants, highly regarded art museums, and one recreational opportunity that is hard to miss.

“Bentonville is the mountain biking capital of the world, and this might tempt you to stay a little longer,” Cox said. “The area hosts over 400 miles of single track and some of the best gravel biking to be found.

“Call ahead and the front desk at Thaden Field will make sure you don’t miss any of the local gems.”

Aside from mountain biking tracks and hiking trails, some common area attractions that are worth checking out include:

The post ‘The Coolest Airport in the Country’ appeared first on FLYING Magazine.