The EAGLE Has Launched to Get Lead Out of Avgas 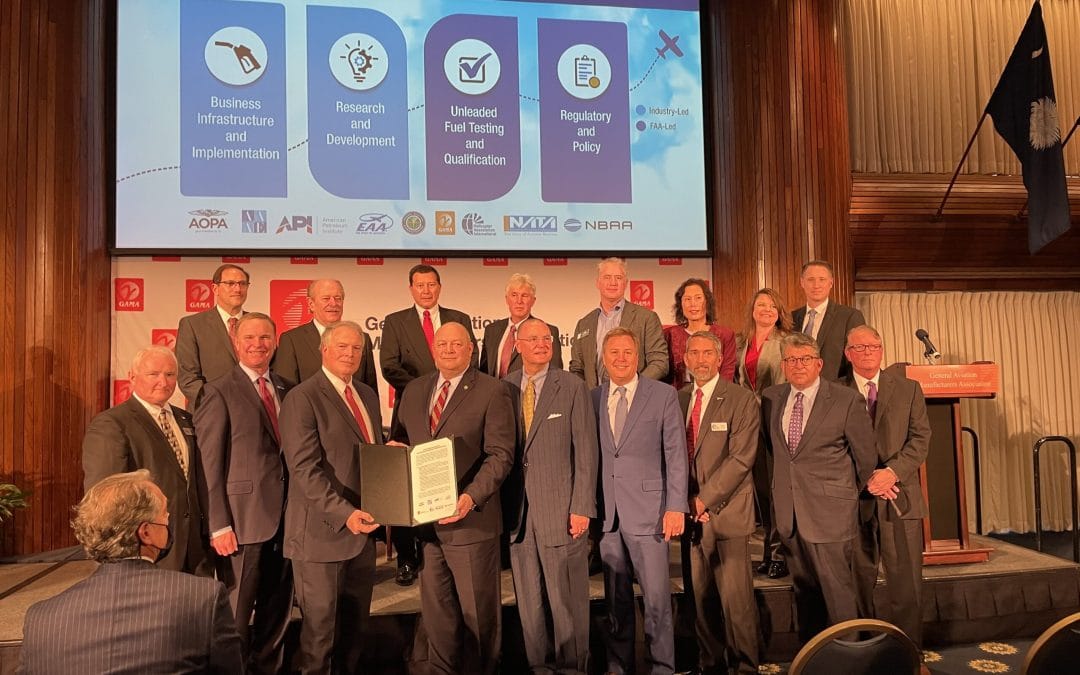 For those attending the annual press conference held by the General Aviation Manufacturers Association (GAMA) on Wednesday at the National Press Club in Washington, D.C., the omission felt strange. How could a meeting of top leaders in the general aviation industry gather in early 2022 and not discuss the elephant in the room: the future of 100LL—and leaded avgas in general?

The meeting delivered GAMA’s 2021 shipments and billings report and updated the industry on the key challenges it faces in 2022: fuel, sustainability, workforce, and supply chain. Fuel—yes, sustainable aviation fuel was discussed, but not avgas, in the general session.

The EAGLE Has Launched

Perhaps you didn’t know that Bunce and Dickson both flew as Zoomies at the U.S. Air Force Academy—and both spent quality time in the cockpit of the F-15 Eagle. So it was with a nod to that shared history that Dickson, along with industry partners, launched the latest in a string of initiatives to get the lead out of aviation fuel for good.

EAGLE stands for Eliminate Aviation Gas Lead Emissions and has been backed by a consortium of general aviation associations and the FAA, as well as the American Petroleum Institute. With piston-powered aircraft composing the largest sector now of lead-based emissions in the U.S., the time has come to get the lead out. The timeline? A lead-free GA system by 2030.

Four pillars form the path to a lead-free aviation system—two of which fall under the GA industry’s responsibility, and two that the FAA must drive forward. These are, broadly:

“This is a safe and practical path to a lead-free aviation system.”

All of this must be accomplished, according to the EAGLE charter, “without compromising the existing U.S. transportation infrastructure system, aviation safety, and the economic and broader public benefits of general aviation.” Stakeholders in the industry and government will dive into this shortly, with a symposium coming up in March to “define a detailed work plan,” according to GAMA.

And Dickson—though he won’t be around to lead the charge—nevertheless pledged the support of the FAA. “This is a safe and practical path to a lead-free aviation system,” Dickson said. “We look forward to starting this new partnership with aviation stakeholders to achieve this important goal.”

Why Are We Here, Though?

It was heartening to read the list of association partners and see them gather on stage for the obligatory group photo. With the preponderance of GA groups—including the Aircraft Owners and Pilots Association (AOPA), American Association of Airport Executives (AAAE), Experimental Aircraft Association (EAA), GAMA, Helicopter Association International (HAI), National Air Transportation Association (NATA), and the National Business Aviation Association (NBAA)—all on board, you would think this is a new movement.

But as AOPA’s president and CEO Mark Baker said in a letter to FLYING earlier this month, we’ve been working at this for more than a decade. And pretty much no one is a fan of leaded gas—even though I recall fondly from my instructor days that the cuffs of my flight jacket carried the scent of 100LL long after the liquid had evaporated.

I guess people in general hate being told what to do—and pilots even more so. Therefore, it takes the ultimate pressure—in the guise of a credible promise from the Environmental Protection Agency—to bring about the change. Frankly, that change has been needed since we started taking lead out of automotive gas back in 1970 with the Clean Air Act and banned its use in new vehicles completely by 1996.

We have several alternatives out there, a handful of which are available for use in certain engines right now. Depending on who you talk with, even the high-compression-engine problem is close to being solved. GAMI has reported in a Q&A that “the critical 14 CFR 33.37 detonation testing necessary to cover all of the high horsepower/high compression ratio/turbocharged engines has already been successfully completed and approved by the FAA (March 7, 2021).”

So maybe 2030 isn’t a stretch goal at all—unless you consider how long it takes to get a group of folks to agree on anything these days.

The post The EAGLE Has Launched to Get Lead Out of Avgas appeared first on FLYING Magazine.