The Early Bird Gets the Good Parking at Oshkosh 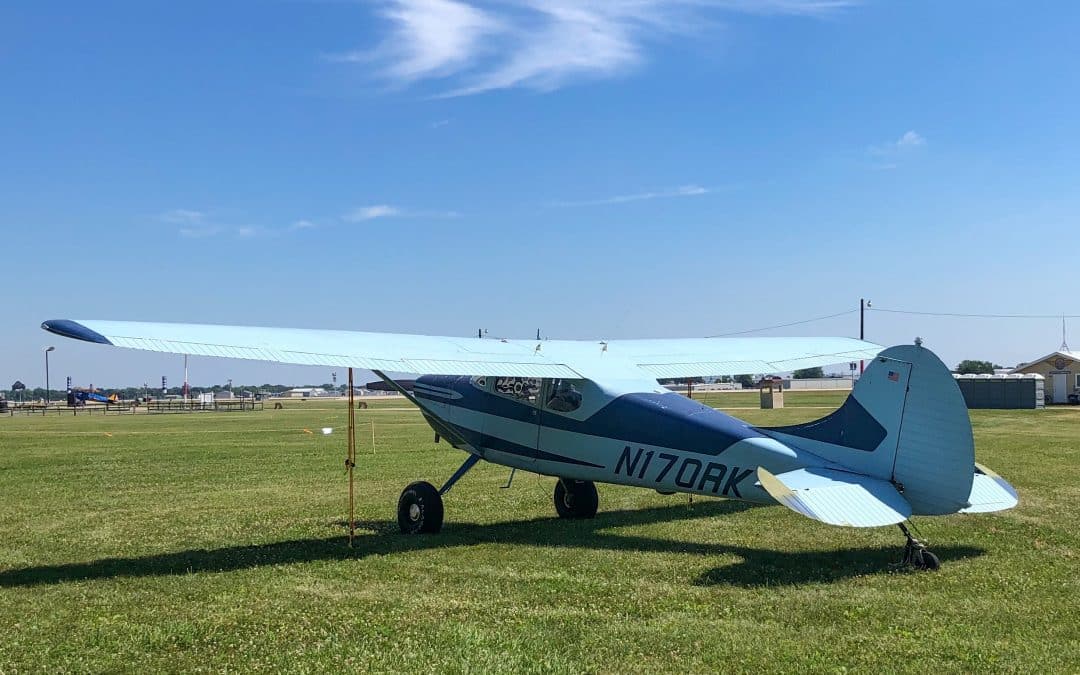 Among the most memorable achievements of a new, first-time airplane owner, certain ones stand out. The first solo of your new machine. Your first cross country. Your first overnight trip. And certainly, your first flight to Oshkosh.

Most pilots are familiar with the event. Now known as EAA AirVenture, thousands of airplanes and their owners converge upon Wittman Regional Airport (KOSH) in Oshkosh, Wisconsin, for a weeklong aviation celebration. Aircraft of all types show up, manufacturers unveil their newest offerings, daily airshows take place, and good friends catch up and share laughs over beer and brats.

Like many pilots, I made my first pilgrimage to the event as a passenger. Back around 1998, or so, I belonged to a flying club in Ann Arbor, Michigan, that maintained a fairly active social calendar. When a couple of members invited me to ride along to Oshkosh in the back seat of the club’s Cessna 182, I leapt at the opportunity.

We flew a 182 there, and opted to take the direct route right over Lake Michigan. This is a somewhat controversial strategy. Such a route, even at our cruising altitude of 12,500 feet, introduces a stretch of about 20 to 25 minutes where, should you experience an engine failure, you will be unable to glide to either the Michigan or the Wisconsin shorelines. I learned that when flying in that stretch, the engine makes some very concerning noises. In your head, anyway.

Although we filed IFR for the flight there, things became somewhat hectic as we approached Oshkosh. While on final to Runway 27, the controller advised us he would be placing three P-51s ahead of us and a B-17 behind. Feeling like we had been teleported into World War II, we monitored the warbirds closely while also keeping an eye out for flak.

The following week at Oshkosh was magical. Camping with friends, seeing thousands of airplanes, and simply taking it all in was a memorable experience. But the trip there was what stood out. The challenge of managing the weather, the route, and the traffic made the rest of the experience feel like something special; it was an adventure that had to be earned, and the payoff felt that much sweeter as a result.

As I walked around the grounds that week, I observed the aircraft owners around us in the midst of their own individual adventures. Seeing them taxi into their parking spots, set up camp, and then kick back in the shade of their wing as they watched arrivals, I became enchanted. The idea of single-handedly orchestrating all the necessary planning and logistics to get to the world’s greatest aviation celebration and then relaxing with my very own airplane became a lifelong goal.

A quarter-century later, I found myself poring over the weather forecast and reviewing the arrival procedures, ready at last to orchestrate the logistics of my own arrival with my own airplane. While most of the process proved to be straightforward and manageable, the weather forecast was ominous. To me, anyway.

It all came down to crosswinds. When you’re as new to tailwheel flying as me, you look for every opportunity to minimize or eliminate them. From opting to fly in the early morning or late afternoon to seeking out airports with suitable runway options, to changing your flying and travel plans completely, you do what you need to do to be safe and conservative. In the week leading up to AirVenture 2022, it became clear I’d have to do some or all of these things to get to the big event safely and without any insurance claims.

The forecast called for winds that were both strong and gusty. With a self-imposed crosswind limitation of 8 knots, I was motivated to plan my arrival around the day with the most favorable winds. Ideally, this would occur on the Thursday prior to the beginning of the big show. This, I had learned over the years, provides just the right amount of time to arrive, secure a great parking/camping spot, and settle in to observe the thousands of weekend arrivals.

Looking at the National Weather Service’s graphical forecast, however, a Thursday arrival looked bleak. Winds gusting to nearly 30 mph were well above my limits, and the rest of the week looked similar. Monday’s forecast, however, was perfect. Not wanting to arrive in the chaos that defines Saturday or Sunday, I was left with one alternative—fly to Oshkosh a full week early, on the Monday before the show kicks off.

The idea of flying up a full week early seemed ludicrous at first. There would be no food vendors open, no trams running, and virtually no other aircraft to see. It would be a ghost town.

But it would be Oshkosh.

I considered the situation. I was able to work remotely. Provided I had access to electricity and Wi-Fi, it made no difference whether I was in an office or in a tent. And the weather on Monday morning looked positively idyllic, with light winds right down the runways at both my home airport as well as at Oshkosh. It seemed arriving so early would provide many upsides with virtually no downsides.

By 9 a.m. Monday morning, I had the airplane packed and preflighted. This early in the week, the Notice (formerly known as the NOTAM—a detailed set of arrival procedures specific to AirVenture) would not be active. I would, therefore, be able to fly directly to the airport as though it was any other Class D airport, with no complications.

The 170 took its time getting off the runway. The 85-degree heat, nearly full fuel tanks, and 150 pounds of camping gear slowed acceleration, as did my newly installed, low-pressure tundra tires. But take off it did before settling into a very luxurious climb. The price of a 180 hp Lycoming O-360 STC certainly seems high, but during takeoffs like this, the trees on the departure end of the runway seem even higher.

Before I knew it, I had leveled off and had little else to do but absorb the reality that I was on my way to Oshkosh in my own airplane. Still new to EFBs, I found the entire navigation process laughably easy. Formerly intimidating concerns, like the location of airspace and, indeed, one’s own location at any given moment, were clearly displayed as plain as day. Simply follow the magenta line, monitor the engine, and look for traffic. Before you know it, you’re approaching your destination stress-free.

The controllers at Oshkosh were friendly and accommodating as ever. I requested and was granted the use of Runway 27. Because of the nonexistent crosswind component, the most interesting part of the landing was my adjustment to the new tundra tires, which contacted the surface sooner than anticipated and threw me off just enough to make a soft yet ugly landing.

I taxied to my preferred parking/camping spot in the vintage airplane area and was greeted with a hearty “Welcome to Oshkosh!” The parking volunteers were on duty and happy to assist a full week before the show was slated to begin. The friendly volunteer asked where I’d like to park, and ultimately, invited me to shut down and explore my preferred area on foot to find the best spot, which I did. There were, apparently, many benefits to arriving early.

After properly securing the airplane with double tiedowns, I bribed a nearby volunteer to give me a ride to a local hotel. It wasn’t that I needed a place to sleep—my tent works fine—but rather that I needed a place to work. Convenient electric outlets, reliable Wi-Fi, and air conditioning would make my three work days far more enjoyable, and two reasonably-priced nights in a hotel would do the trick nicely until my vacation officially began on Thursday.

Walking away from my airplane, I couldn’t resist a glance back. By any measure, my first solo flight into AirVenture was a sham. I arrived in perfect weather. I arrived before the busy, chaotic arrival procedures were in place. And I was able to have my first choice of the most prime parking spots on the grounds.

But at the same time, I managed risk, I flew within my abilities, I got to Oshkosh, and I did it all without having to file an insurance claim afterward. I was a pansy, but I was a safe one. And if achieving my 25-year dream of flying my own machine into AirVenture meant easing into it as I was able, I felt good about it.

The post The Early Bird Gets the Good Parking at Oshkosh appeared first on FLYING Magazine.