The Edgar Percival E.P.9 and Its Unusually Useful Design 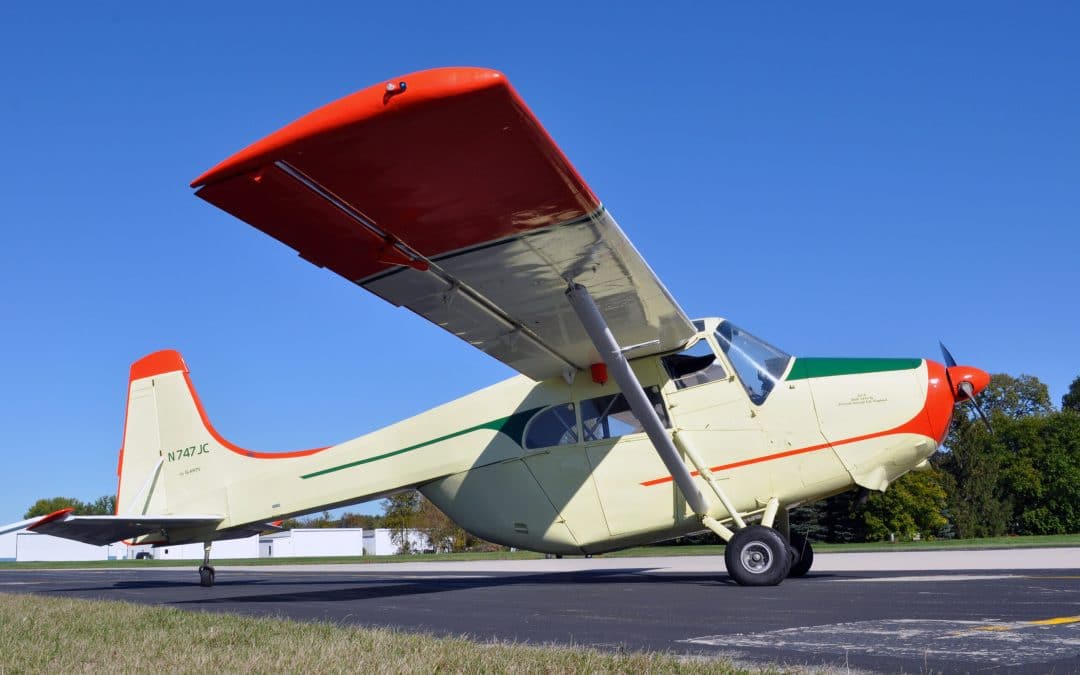 On paper, the 1950s-era Edgar Percival E.P.9 isn’t so different from many types. From a technical aspect, it checks many of the same boxes; it has a high wing braced by struts, it’s a taildragger, it has one piston Lycoming engine, and it has room for five seats. Fairly straightforward and unremarkable.

Walk up to one in person, however, and it quickly becomes clear that this machine is something altogether different. Despite standing only about a foot taller than a Cessna 185, the E.P.9 is massive in person, and dwarfs any single-engine piston GA aircraft in the vicinity. Additionally, the layout is vastly different from other types, with a cockpit that’s elevated above and separated from the cavernous passenger/cargo cabin below.

Much of the airplane’s bulk comes in the form of fuselage depth. The elevated cockpit also features a significant cabin height, and actually enables taller pilots to turn their heads, look through small upper cockpit windows, and look down upon the upper surface of the wing. Large side windows extend downward to the level of the seat cushions, providing pilots with outstanding visibility.

Passengers enter the cabin through a single large door on the left side of the fuselage. Once inside, all but the tallest individuals are able to stand up straight before taking their seats. Observant passengers might take notice of the massive clamshell door just behind the rear bench seat, and of those folks, the more imaginative might ponder their fate should that door somehow become unlatched.

The proximity of the rear passenger seats to the clamshell door must have been fairly uncomfortable to imaginative minds. [Photo: Jason McDowell]

All of these seemingly mismatched and unusual design aspects can appear random at first glance. But when the aircraft’s history is explored, it becomes clear that every feature has its purpose. Together, these features support the original mission of the E.P.9: a single solution to answer freight, air ambulance, and agricultural requirements in rural, remote areas.

Viewed through this lens, the design makes sense. The raised cockpit, for example, provides fantastic outward visibility to agricultural pilots weaving their way around trees and power lines. Additionally, this opens up space beneath the cockpit for chemicals or additional fuel.

Power was provided by 270-295 hp Lycoming GO-480 variants. These produced cruise speeds of around 120 mph (104 knots), while the large flaps and drooping ailerons provided an impressively low 35-mph (29-knot) stall speed. For an airplane with a maximum agricultural takeoff weight of 4,320 pounds, this was an admirable performance envelope. Later versions dedicated to aerial application utilized various radial engines for additional power.

With optional auxiliary fuel tanks, the E.P.9 had a total capacity of 154 gallons…which, at normal cruise settings, provides 8 to 10 hours of endurance. While the airplane was likely never envisioned to fly 1,000-nm legs, it was certainly intended for operation in remote areas where fuel is scarce. Tankering fuel was, therefore, a capability that was thought to appeal to operators.

The bulbous passenger cabin can be outfitted for cargo, passenger, or air ambulance duties with relative ease. The clamshell door at the rear enables effortless loading and unloading of patients or cargo. And the gangly, exposed main landing gear components enable relatively smooth operation from rough, unimproved runway surfaces.

The E.P.9’s unique yoke design is reminiscent of the Spitfire, but the performance envelope certainly is not. [Photo: Jason McDowell]

Finding an E.P.9 to examine in person is difficult. First flown in December 1955, only 27 examples were built. Of those, an estimated seven survive today. And of those, most are on display in museums and only one or two are thought to be airworthy and flown regularly.

Presently, two examples exist in the U.S. One is registered to a museum in New Mexico, and as it turns out, the other, in Mississippi, is in need of rescuing. It has been mostly restored and is complete but the owner, Pat Ryan, no longer has the time or desire to complete the project. He would like to sell it to someone willing to complete the restoration. If you’re interested, email us and we’ll put you in touch with him.

Though the E.P.9 was never considered a commercial success, it serves as a fascinating example of purpose-driven design. Individually, certain features seem randomly chosen. But collectively, they work together to serve a common overall purpose. By this measure, the engineers responsible for the airplane could feel proud of their technical achievements.

The post The Edgar Percival E.P.9 and Its Unusually Useful Design appeared first on FLYING Magazine.